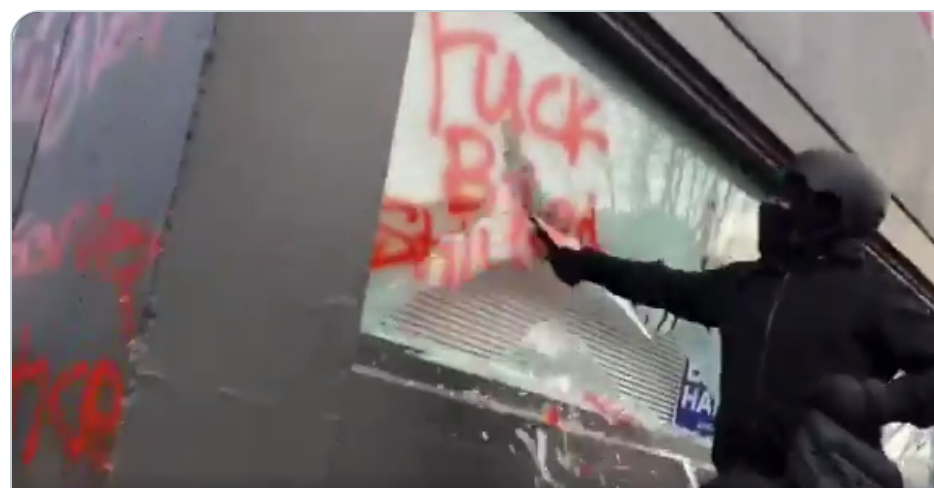 When people tried to sell us on the idea that the radical left would quit rioting once Joe Biden was president, I just had to chuckle.  I knew that what they were saying simply was not true.  But I figured that the radical left would at least give Biden a few days before they started rioting, looting and burning things again.  Sadly, I was wrong.  Just hours after Joe Biden was sworn in, radical leftists in Portland and Seattle started going completely nuts.  The footage that you are about to see is extremely shocking, but so far the corporate media is mostly avoiding this story because it does not fit any of the narratives that they are currently trying to push.  Of course if it was Trump supporters rioting it would be the biggest news story in the entire nation right now.

Apparently, Antifa activists in Portland are not too thrilled that Biden is president, because the primary target of their violence on Wednesday was the Democratic Party of Oregon headquarters.

The corporate media was so quick to use the term “domestic terrorists” when it was Trump supporters that were going crazy.

Will the corporate media dare to use the same term for these nutjobs?

You can watch footage of Antifa radicals smashing the windows of the Democratic Party of Oregon headquarters right here.

Portland: Watch shocking footage of #antifa smashing up the Democratic Party of Oregon headquarters. They bring weapons while their comrades use umbrellas to block surveillance video. Video by @Julio_Rosas11. #PortlandRiots pic.twitter.com/KdNNRgIEV0

Didn’t they realize that it was Inauguration Day?

Perhaps they should have actually given Biden a chance to do something that they don’t like before they started smashing things up.

Here is more footage of the damage that was caused.

In an attempt to stop the mayhem, the impotent police in Portland immediately posted a message on Twitter warning that the rioters could potentially face “arrest or citation”…

To those gathered near the Democratic Party of Oregon Portland Headquarters: Members of this group have been observed damaging the building. Anyone who is involved in criminal behavior including: vandalism and graffittiing is subject to arrest or citation.

Oh no, not a citation!

Meanwhile, Antifa once again demonstrated who rules the streets of Seattle.

When they got to just the right spot, they burned an American flag in the middle of an intersection.

ot satisfied with that, the Antifa rioters also decided to vandalize an Amazon Go store in the downtown area.

Many in the corporate media are envisioning that the primary threat of violence will come from Trump supporters now that Biden is president.

But that is not even close to the truth.

Over the past year, it has been the radical left that has been endlessly rioting, looting and setting buildings on fire.  They have relentlessly assaulted police stations, courthouses and other federal buildings, and not once has the corporate media ever referred to them as “domestic terrorists”.

You would think that the fact that Biden has replaced Trump in the White House would make the radical left happy for a few days, but it appears that nothing will ever make them happy for very long.

As I have warned over and over again, the radical left wants to dismantle the entire system and bring about a full-blown revolution in this country.

Now that Trump is out of office, all of this political violence is Biden’s problem now.

Will he have the guts to stand up to the radical left?

The worse economic conditions in this country become, the worse the rioting is going to get, and the radical left is making it clear that Biden is not going to get any sort of a “honeymoon” period.