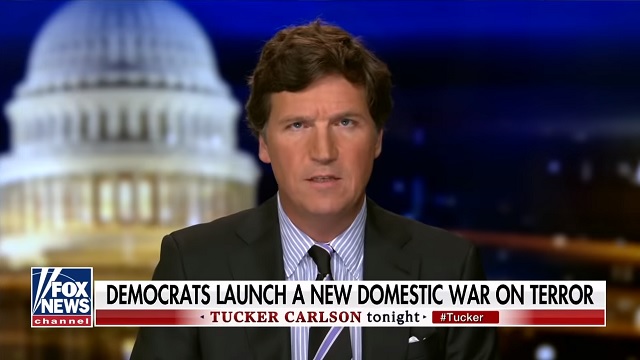 Tucker Carlson on Tuesday night said vengeful Democrats are “thinking of new ways to injure, humiliate and degrade their political opponents, make it impossible for them to work again, throw them in jail, and destroy their lives.”

As of noon Wednesday, the Trump administration will officially come to an end. If you supported Donald Trump, that’s a sad thing to face after four years. On the other hand, if you’re one of the many in our professional class who have made hating Donald Trump the very center of your life, you’ve gotten exactly what you wanted. You ought to be celebrating.

But they’re not celebrating. In fact, no one in the Democratic Party seems happy. Instead of taking victory laps, they are plotting revenge against the people they just beat. They’re thinking of new ways to injure, humiliate and degrade their political opponents, make it impossible for them to work again, throw them in jail, and destroy their lives.

Imagine winning a tennis match in straight sets, then immediately leaping over the net and smashing your opponent in the face with your racket. It wasn’t enough for you to win, you had to inflict physical pain. You couldn’t be happy until another human being screamed in agony. What kind of person would do that? The kind of people we’re watching now, the kind of people who are even more vicious when they win.

The leaders of the Democratic Party have now decided that 74 million Trump voters weren’t just wrong or misguided. They didn’t simply back the wrong guy or have incorrect opinions or fail to see obvious truths. No, the threat they pose is graver and more serious than that. These 74 million Trump voters are, in fact, terrorists. They are a looming physical threat to the rest of us, and must be dealt with in the way that you deal with threats like that.

This was former CIA Director John Brennan this morning:

.@JohnBrennan: Biden intel community “are moving in laser-like fashion to try to uncover as much as they can about” the pro-Trump “insurgency” that harbors “religious extremists, authoritarians, fascists, bigots, racists, nativists, even libertarians” pic.twitter.com/SjVXWhPhR8

Tucker on Wednesday called out Biden’s war on so-called “white supremacy” as a war on everyday Americans by the FBI and Pentagon.

“There’s a new regime in power, starting today, and they seem to be planning to accelerate things dramatically,” Carlson said during his monologue on Wednesday. “They are getting the FBI and the Pentagon involved in this hunt for people who may criticize them.”

Our ruling class in three years went from banning popular right-wing dissidents from the internet and online banking to banning the president and trying to get Fox News off the air.