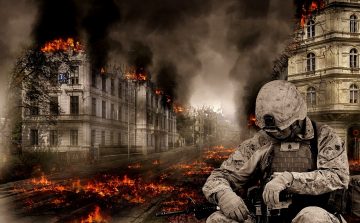 Globalists are on a war path against anyone who knows their birthright is freedom and that no one owns them. Governments all over are now going to war against those pesky “domestic terrorists” who won’t submit to their enslavement.

“What if I don’t want a new world order? What if we free humanity to interact peacefully?” asks James Corbett of the Corbett Report. Basically, we aren’t allowed to be free.  We can only sort of choose which master rules over us. (Whether that’s by voting or moving.)

The great news is that many people are finally waking up to the realization that government is slavery and no one has any moral right to own you. The bad news is that some still want a master and will fight to keep their particular one in place.

“There’s a lot of things we have to note here,” Corbett says. But freeing humanity is not in the cards for the rulers. It will be up to us. “Fake and staged cold war 2.0 is being engineered right before your very eyes as I’ve been talking about for year after year after year after year and it’s maddening! It’s truly maddening to KNOW they’re going to build China as the new boogeyman so that ultimately they can engage in the cold war that is meant to merge these systems so that there will be a technocratic system in all of these countries that will be puppeteered by the same people who are funding it all into existence. If you need to get up to speed on that, please do so quickly!”

As Corbett alludes to, this all and engineered scam to keep us enslaved to the rulers and the New World Order. It’s the same scam that’s continuing at an epic scale and speed. Please remember this is a huge psyop designed to manufacture your consent to be ruled. “Do not fall for it,” Corbett reminds us.

“We’re all about to be enemies of the state,” says James Evan Polato. Whether you want a master or not, they are warring against us. You’d better make a decision quickly. It’s come down to freedom or slavery. The “gray area” is now long gone. This is “aimed at you!” Corbett says. “This has always ALWAYS been the plan.”

“Get ready for it folks because it’s coming…they will come after you with everything they have,” Corbett says. Wake up. Choose freedom or slavery. If you choose freedom, take the stance that all slavery should be abolished, including government. If you choose slavery, enjoy your servitude.