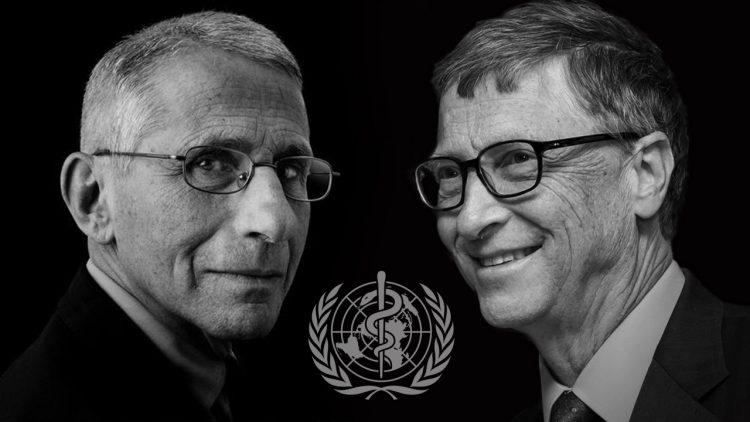 Bill Gates is a very wicked man.  He has been open about pushing vaccines even though he is not a licensed doctor.  He spouts lies about their safety and effectiveness, as well as says he’s just fine with nearly a million people incurring adverse side effects that include death to produce one vaccine.  Why does he do this?  The very thing that the Bible says is the root of all evil, the love of money.  Now, he’s angry because people are exposing his corrupt, murderous and greedy intentions along with Dr. Anthony Fauci’s and they are wanting to use social media to censor those of us who expose them for who they are and what they are doing.

Bill Gates is apparently shocked over ‘crazy and evil conspiracy theories’ which claim that he and Dr. Anthony Fauci are participating in a nefarious scheme to push vaccines, profit from the pandemic, and reduce the population.

In Wednesday comments to Reuters, Gates said that there are “millions of messages out there” targeting he and Fauci, and suggested that “social media companies” might be able to censor discussion on the topic.

“Nobody would have predicted that I and Dr. Fauci would be so prominent in really kind of evil theories about – did we create the pandemic, are we trying to profit from it? – and on and on,” said Gates, adding “We’re going to have to get educated about this over the next year and understand, how does it change people’s behavior?”

“How should we have minimized this, either working with the social media companies or explaining what we were up to in a better way?“

Gates’ motives have come under fire over his foundation’s 2019 participation in “Event 201“ – a collaboration between the Johns Hopkins Center for Health Security, the World Economic Forum and the Bill and Melinda Gates Foundation which simulated a global pandemic after a fictional coronavirus broke out among pigs in Brazil, before spreading to farmers. In the simulation, the virus infected the globe within six months, and killed 65 million people, triggering a global financial crisis. All of this took place just months before COVID-19 emerged.

In an April 2020 interview, Gates told the BBC: “Now here we are. We didn’t simulate this, we didn’t practice, so both the health policies and economic policies, we find ourselves in uncharted territory.”

In April 2018, Gates told the Massachusetts Medical Society that “millions could die” if the United States doesn’t prepare for a coming pandemic. Specifically, Gates said the U.S. government is falling short in preparing the nation and the world for the “significant probability of a large and lethal modern-day pandemic occurring in our lifetimes.”

In 2017, Gates told the Munich Security Conference that world leaders should “imagine that somewhere in the world a new weapon exists or could emerge that is capable of killing millions of people, bringing economies to a standstill, and casting nations into chaos. If it were a military weapon, the response would be to do everything possible to develop countermeasures,” adding that a “sense of urgency is lacking” over biological threats.

And according to Robert F. Kennedy, Gates was involved in a Polio immunization program in India which paralyzed 490,000 children.

Promising his share of $450 million of $1.2 billion to eradicate Polio, Gates took control of India’s National Technical Advisory Group on Immunization (NTAGI) which mandated up to 50 doses (Table 1) of polio vaccines through overlapping immunization programs to children before the age of five. Indian doctors blame the Gates campaign for a devastating non-polio acute flaccid paralysis (NPAFP) epidemic that paralyzed 490,000 children beyond expected rates between 2000 and 2017. In 2017, the Indian government dialed back Gates’ vaccine regimen and asked Gates and his vaccine policies to leave India. NPAFP rates dropped precipitously.

In 2017, the World Health Organization (WHO) reluctantly admitted that the global explosion in polio is predominantly vaccine strain. The most frightening epidemics in Congo, Afghanistan, and the Philippines, are all linked to vaccines. In fact, by 2018, 70% of global polio cases were vaccine strain.

Gates has also opined on the need to control population growth – for which a plethora of theories exist involving vaccines. In 2012, Gates said: “The problem is that the population is growing the fastest where people are less able to deal with it. So it’s in the very poorest places that you’re going to have a tripling in population by 2050. (…) And we’ve got to make sure that we help out with the tools now so that they don’t have an impossible situation later.“

So, in case Gates is wondering just why people are skeptical over his push to vaccinate the world and take a key outside role in advising the Biden administration’s COVID-19 response, the above evidence may offer some clues.

On Saturday, I posted a video that records Gates’ lawless history, which exposes him for the criminal he is.

TRENDING:  Forget 5G: 2 Enlightening Experiments Indicate That Wi-Fi May Be Killing Us (Video)

And just remember, he stands to make a significant amount of money, but the problem is too many people have become wise to the CONvid-1984 hoax and his final solution of a vaccine.

This is a man who hangs around with convicted pedophiles and yet, he claims he is concerned about people, especially children?  Give me a break!

Gates also engages in doublespeak when it comes to the vaccine and those pointing out the obvious dangers with them.

It’s long past time the people of the world declared Bill Gates enemy number one against humanity, no a humanitarian.

While Cop Was on $0 Bail for Showing Up to 911 Call & Raping Victim, He Was Arrested for Rape AGAIN
August 17th, 2022 Sons of Liberty Media