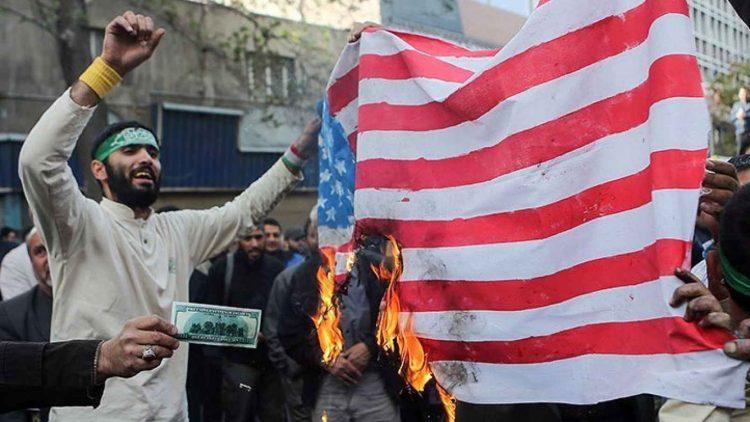 The Biden administration responded to protests against its stolen election by embedding a domestic extremism office into the National Security Council. The man in charge of making it happen, Joshua Geltzer, had previously denied that Black Lives Matter was a terrorist threat and had attacked the Trump administration’s response to Antifa and BLM violence in Portland.

That means that the only domestic extremists the NSC will be fighting are Republicans.

Even while the Biden administration is preparing to double down on Obama’s abuse of the national security state to target his political opponents, it’s also giving real terrorists a pass.

Joe Biden, whose biggest bundlers included the Iran Lobby, announced he was ending support for American allies fighting the Houthis, and then went even further by preparing to remove the terrorist organization whose motto is, “Death to America”, which took American hostages and tried to kill American sailors, from the list of designated foreign terrorist organizations.

The motto of Iran’s Houthi Jihadis is, “Allahu Akbar, Death to America, Death to Israel, Curse the Jews, Victory to Islam.” The Houthis took over parts of Yemen as a result of the chaos unleashed by Obama’s pro-Islamist Arab Spring. Since then they’ve been engaged in a protracted war while causing a local famine by confiscating food from the local population.

Last year, the Trump administration had finally secured the release of three American hostages, Sandra Loli, an American aid worker who had been held for 3 years, another American who had been held for a year, and the body of a third American, in exchange for 240 Houthis, including three dozen Islamic terrorists who had been trained in the use of missiles and drones by Iran.

The Houthis lived up to their “Death to America” slogan by repeatedly launching cruise missiles at the USS Mason which had been protecting shipping in the area. And they lived up to the second half of their slogan by ethnically cleansing the remaining local Jewish population, locking them up, and confiscating their homes and land. Local reports stated that the Houthis were “cutting off water & electricity to Jewish homes and preventing Jews from purchasing food.”

“No Jew would be allowed to stay here,” one of the Jewish refugees said.

The Iran-backed Islamic terrorists fight using 18,000 child soldiers. The soldiers, many abducted, some as young as 10, are taught to hate America and to kill enemies of Iran.

None of this stopped Biden’s State Department from taking the Houthis off the terror list.

‘Ansarallah’ or ‘Defenders of Allah’ is what the Houthis call themselves. Blinken had only been confirmed on Tuesday. By next Friday, he had already somehow completed the “comprehensive review”, amid all the other minor business like China, Russia, and a global pandemic, and decided that the Islamic terrorists whose motto is “Death to America” aren’t really terrorists.

How can the Biden administration deny that Islamic Jihadis backed by Iran who attacked Americans are terrorists? The State Department claimed that this, “has nothing to do with our view of the Houthis and their reprehensible conduct, including attacks against civilians and the kidnapping of American citizens.” Not to mention the attacks on the USS Mason.

But the Biden administration isn’t even going to pretend to care about attacks on our military.

The Bidenites are claiming that they’re taking the Houthis, whom they don’t deny are terrorists, off the list of designated terrorist groups because of the “humanitarian consequences”.

TRENDING:  The Diverse Hatreds Of The Democrats

That’s a lie, no matter how often you hear it in the media, because Secretary of State Mike Pompeo announced that the United States would be providing licenses to “humanitarian activities conducted by non-governmental organizations in Yemen and to certain transactions and activities related to exports to Yemen of critical commodities like food and medicine.”

That’s despite the fact that the humanitarian crisis in Yemen was caused by the Houthis.

Nevertheless, the media, echoing propaganda from the Iran Lobby and Qatar, a close terrorist ally of Iran, has falsely claimed that the Houthis are the victims of the Yemen famine. A number of politicians, mostly Democrats, but some Republicans, as well as various aid groups, have pushed this same disinformation campaign about the causes of the Yemen famine.

America and its allies have spent billions providing food, medicine, and other humanitarian aid to Yemen. That aid has been seized by the Houthis who have used it for their own troops or to resell on the black market. This is a familiar problem from Syria to Somalia, and aid groups have refused to honestly address their complicity in aiding the terrorists who caused the crisis.

There’s no money in admitting that the aid an organization is providing is being seized by the terrorists, prolonging the conflict and worsening the humanitarian crisis. Some aid organizations share the same goal as the Houthis of worsening the crisis because it boosts their donations.

That’s why international aid organizations don’t want to talk about the Houthis taking their food donations, or about their use of child soldiers. “It’s a taboo,” an anonymous aid official had said.

When Secretary Pompeo announced that the United States was finally designating the Houthis a foreign terrorist organization, the United Nations took the lead in claiming that it would cause a humanitarian crisis. But the UN’s World Food Program had already admitted that its food shipments weren’t getting to the starving people because the Houthis were intercepting them.

The Middle East director for UNICEF also admitted that the Houthis were seizing food.

An Associated Press investigation found entire stores selling “cooking oil and flour displaying the U.N. food program’s WFP logo.” The former Houthi education minister said that 15,000 food baskets that were supposed to go to hungry families instead went to the Houthi terrorists whom the Biden administration is defending. Massive amounts of aid have been pumped into Yemen, and the famine has only grown worse because the Houthis have used starvation as a weapon.

The only way to end the famine is to end Iran’s grip on Yemen through its Houthi terrorists.

That’s obviously not what Biden or the Democrats have in mind. The loudest Democrat voices against designating the Houthis as a terrorist group have a troubling history with Iran.

“Reversing the designation is an important decision that will save lives and, combined with the appointment of a Special Envoy, offers hope that President Biden is committed to bringing the war to an end,” Senator Chris Murphy tweeted.

Murphy had been among the loudest voices against the designation.

And Murphy had met with Iran’s Foreign Minister Mohammad Javad Zarif last year. That same year, he had advocated lowering sanctions on Iran for “humanitarian reasons”. Biden had also joined the push to use the pandemic as a pretext for reducing sanctions on the terror state.

That same year, the Left succeeded in forcing out Rep. Elliot Engel, one of the few remaining pro-Israel Democrats, and replaced him with the militantly anti-Israel Rep. Jamaal Bowman, whose election was backed by Rep. Alexandria Ocasio Cortez and her antisemitic ‘Squad’.

Engel, who had served as Chairman of the House Foreign Affairs Committee, was replaced by Rep. Gregory Meeks, a strong backer of the Iran Deal. Meeks’ position was cheered by Iran Lobby groups. As far back as 2009, Meeks had declared at a hearing, “I have developed a tremendous appreciation for the work of the National Iranian American Council. I am pleased that we will hear the perspective of NIAC’s President, Mr. Trita Parsi.”

Emails released allegedly showed Parsi telling Iran’s Foreign Minister, “I am having a meeting with Gilchrest and Meeks, and they asked for our assistance in getting some communication going between the parliamentarians.”

Speaking to the Islamic Republic News Agency, the official state news agency of the Islamic terrorist state, Chairman Meeks allegedly stated that he was willing to travel to Iran and had been engaged in dialogue with Iranian legislators.

Meeks took the lead in attacking the designation of the Houthi Islamic terrorists as terrorists, arguing that, “No solution in Yemen will be sustainable unless the Houthis are involved.”

And that gets at the real reason why Biden and Democrats oppose the designation.

It’s not about humanitarian aid, which would have kept on going anyway, only to be stolen by the Houthis. It’s about supporting Iran’s bid to take over parts of Yemen in order to control shipping and tighten the grip of the Islamic terrorist regime over the entire region.

The ‘diplomatic’ solution advocated by Biden and the Democrats would finalize Iran’s grip over parts of Yemen. Designating the Houthis as terrorists would get in the way of another in a series of Islamist dirty deals with Iran that began with Obama and that will continue on under Biden.

Even while the Democrats insist loudly that the Houthis must be part of the solution in Yemen, they just as vocally cry that the Republicans must be isolated and eliminated in America.

The Democrats militarized D.C. with an armed occupation and are criminalizing political dissent. They have claimed that one riot, after a year full of them by their own activist wing, requires a permanent state of emergency that will be run through the National Security Council.

The Biden administration is not only taking the Houthis, and likely other Islamic terrorist groups, off the terror list, it’s putting the domestic political opposition on its terror list. This is an extension of the same Obama policy that illegally shipped foreign cash to Iran even while it was using the NSA to spy on pro-Israel members of Congress and on the Trump campaign.

The Democrats are happy to fight terrorism by designating their domestic political opponents as terrorists while removing the “Death to America” Houthis who have kidnapped and killed Americans, who fired on the USS Mason, and ethnically cleansed Jews, from the terror list.

And what do the Houthis plan to do with their newfound support from the Biden administration?

In addition to sanctioning the Houthis, the Trump administration sanctioned three of their leaders, beginning with Abdul Malik al-Houthi. The Houthi leader has made it clear that he intends to build up the same missile program that was used to attack the USS Mason.

“To have rockets that could reach far beyond Riyadh, this is a great achievement,” he said, referring to the Saudi capital.

He also promised to send terrorists to fight against Israel.

“Many of Yemen’s tribesmen are ambitious to fight against Israel, and they are looking for the day to participate along with the freemen of the Islamic nation against the Israeli enemy,”

This is the terrorist group that the Biden administration and the Democrats are bailing out even while they’re criminalizing the Republican political opposition as terrorists.

“Death to America” is something that the Houthis and their Democrat supporters can agree on.