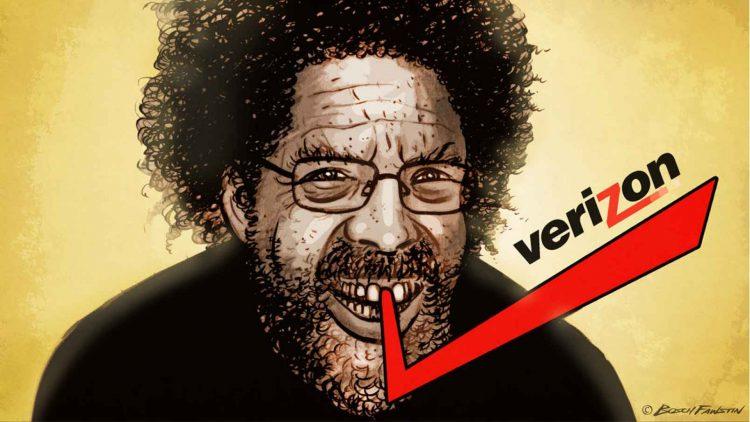 Verizon is a $200 billion corporation and Cornel West is the author of “The Ethical Dimensions of Marxist Thought”. Verizon is one of the biggest companies in America, while West claims to hate corporations so much that he taunted Obama as a “Rockefeller Republican in blackface”.

But Verizon’s Yahoo subsidiary is working together with the infamous socialist who had praised Venezuelan butcher Hugo Chavez as part of its #YahooAllyshipPledge which vows to connect “diverse creators” with “thought leaders, nonprofits and activists, including Dr. Cornel West.”

West got a doctorate in philosophy for his aforementioned dissertation on the ethical dimensions of an ideology that killed millions of people in which he mentioned “the profound tragedy of the epochal change in the Soviet Union and Eastern Europe” and argued that, “Marxist thought becomes even more relevant after the collapse of Communism in the Soviet Union.”

Verizon has not publicly stated its position on the relevance of Marxist thought except perhaps through its relationship with the extremist author of multiple works dealing with Marxism.

When West wrote that his academic career had been partly concerned with, “defending sophisticated Marxist theory as an indispensable, though by itself inadequate, weapon in the struggle for individuality and democracy”, who knew it would be brought to you by Verizon.

As John Perazzo at Discover the Networks documented, West has a very ugly radical history.

Verizon, a massive multinational gobbling up countries and companies until it ended up owning Yahoo, should be everything that West hates. And Cornel West’s Marxist thought, should worry Verizon. But ‘woke’ multinationals can unite with socialists around power and identity politics.

It would be hard to call it fighting racism when West has been one of Farrakhan’s biggest allies, appearing with him at events and defending him against charges of antisemitism.

That’s the deranged bigot who had declared at Madison Square Garden that, “The germ of murder is already sewed into the hearts of the Jews in this country” and warned, “If you rise up to try to kill me, then Allah promises you that he will bring on this generation the blood of the righteous. All of you will be killed outright.”

“You cannot say, ‘Never Again’ to god because when he puts you in the oven, ‘Never Again’ don’t mean a thing,” the Nation of Islam leader had ranted.

Cornel West has veered between denouncing antisemitism and blaming Jews for antisemitism.

In Black Anti-Semitism and the Rhetoric of Resentment, an article that West wrote for Michael Lerner’s Tikkun, he blamed black antisemitism on, among other things, “the occupation of the West Bank and Gaza… and the visible conservative Jewish opposition to… affirmative action.”

It’s doubtful that black antisemitism has anything to do with Israel’s fight against Islamic terrorism. Even the Nation of Islam’s antisemitism predated the rebirth of the Jewish State.

But West has a particular obsession with hating Israel that is all his own.

To paraphrase The Manchurian Candidate

, it might have been helpful if West had decided exactly how many “Palestinian babies” the Jews had killed while opposing affirmative action.

These numbers, like “ethical Marxism”, were of course garbage. But that didn’t stop West from pushing them anyway. Or describing Israel’s defense against Hamas as “Jewish racism”.

“The rockets of Hamas indeed are morally wrong and politically ineffective – but these crimes pale in the face of the U.S. supported Israeli slaughters of innocent civilians,” West argued.

Hamas has actually slaughtered innocent civilians, not just with rockets, but with suicide bombers in buses and pizzerias, and with the kidnapping and murder of Jewish teenagers.

But West has never cared about such details when there’s a terrorist regime to support.

West had joined a solidarity tour to Venezuela. “We need this in inner-city America,” he had gushed. “Look at all the needs being satisfied.” A decade later, the socialist utopia had reduced Venezuelans to eating household pets and running out of gas with which to burn the bodies of the dead. Much of the country fled as the industries were nationalized and the people starved.

Did America’s inner cities really need people waiting half the day for their milk ration?

West had tweeted, “I love that Hugo Chavez has made poverty a major priority”, he had met with the brutal tyrant, and had co-signed a letter of support for the socialist tyranny which had urged President Bush to “put an end to U.S. funding of opposition political groups”.

As mobs rioted in the street demanding food, Cornel West blamed America’s “ugly” policies toward the socialist dictatorship, rather than conceding that he had been wrong.

Cornel West’s radicalism has never stopped him from being embraced by Democrat presidential campaigns, like those of Barack Obama and Bernie Sanders, both of which he eventually dumped for being insufficiently radical, by leading academic institutions and the media, and by major corporations which claim to be opposed to extremism, but not from their own side.

Verizon’s Swedish CEO Hans Vestberg had declared, “we support the right for peaceful protests, we condemn the violence and rioting occurring in the nation’s capital”.

Vestberg didn’t mean race riots by Black Lives Matter: a Marxist black supremacist hate group, but the protests over the stolen election. In response to the Black Lives Matter race riots, the Verizon boss had announced that the company was donating $10 million to leftist groups, including Sharpton’s National Action Network, which had played a role in racist violence.

However, after the Capitol protest, Verizon announced that it would be stopping donations to Republicans who had voted to challenge the results of the stolen 2020 presidential election.

Vestberg’s politics are not news. The Verizon boss is a member of the board of governors of the United Nations Foundation alongside Soros figurehead Mark Malloch-Brown, Ted Turner, the Queen of Jordan, and Gro Harlem Brundtland, the former Prime Minister of Norway and former Vice President of the Socialist International, who began an article by quoting Karl Marx.

But Verizon hooking up with Cornel West still marks another ugly moment in the ‘wokening’ of the Fortune 500. And if Corporate America has become more receptive to Socialists and Marxists, the radicals have also become more willing to accept corporate sponsorship.

The Yahoo Allyship Pledge claims that it will use its alliance with the likes of Cornel West to help people “better understand the complex topic of race”. West has already laid out his understandings of race in pamphlets like “Toward a Socialist Theory of Racism” which began with “conceptions of racism in the Marxist tradition” and claimed that industrial capitalism was built on slavery and imperialism, while multinational corporate capitalism was somewhat better.

As part of its ‘allyship’, Yahoo’s lifestyle section quotes West on “white privilege”.

Cornel West, whose father was a defense contractor and who has a school named after his mother, whose older brother taught at MIT and worked for IBM, who was accepted to Harvard and then Princeton and Yale, knows something about privilege. Cornel West knew Elizabeth Warren when they were both at Harvard, and knew both Kamala and Buttigieg’s fathers.

The elites, whatever race they claim (and in both Warren and Kamala’s case, race has been a fluctuating variable) are part of the same privileged circle. Verizon’s sponsorship is just another link in the iron chains that bind ordinary Americans under an oligarchy of elites whose members act out roles like the oppressor and the oppressed to hide their mutual power in the system.

Cornel West was happy to lend his name to bolster Hugo Chavez’s regime. Now Verizon and its Yahoo subsidiary can benefit from the same branding as Venezuela’s brutal socialist tyranny.

Strip away the Marxist didacticism and all that’s left is the power of an oppressive machine that disguises its rule as revolution. Whatever logo is etched on the bottom of the boot on your neck, the owner of the boot will be sure to enlist Cornel West to explain to you why you deserve it.

Preferably, while quoting Karl Marx on behalf of Verizon.

Verizon won’t donate to Republicans who legally challenge elections. But it will work with the author of, “The Ethical Dimensions of Marxist Thought

”.The real business of ‘woke’ corporations and of socialists is a monopoly on power.