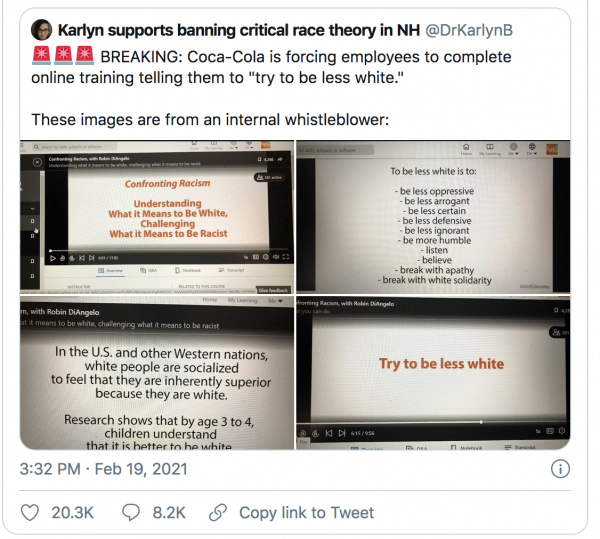 It’s time to put down the sugary beverage for good. Doesn’t matter if it’s Coca-Cola or Pepsi, the participants in the so-called Cola Wars will always side with the anti-white zeitgiest regardless of the corporation.

Not only is Coca-Cola a carcinogen and responsible for heart disease and diabetes, but it’s a company dedicated to promoting the anti-white mindset among those employed with the Atlanta-based entity. [Report: Coca-Cola Forcing Employees To Complete Training ‘To Be Less White’, Outkick.com, February 19, 2021]:

If you are reading this while drinking a can of Coke, may I suggest a Pepsi?

Friday, images leaked online of an alleged internal whistleblower at Coca-Cola showing that the company made its employees complete a racist training program with the goal to be, wait for it, “less white.”

OutKick has reached out to Coca-Cola for confirmation and comment on the reports. OutKick will update this story if and when Coke returns our emails and calls. Warning to the readers: no comments and ignored requests are comments, powerful comments.

Unfortunately, a major company stooping to this level wouldn’t be surprising. As I’ve warned for months, our country is inching toward a place where high-ranking executives see citizens only by their skin color, their individuality be damned. What’s worse, it’s spreading rapidly through our country’s schools (many over Zoom, of course). This week, a disgraceful New York school sent parents a “white identities” chart to find their level of whiteness. If they are too white, they may have to apologize and self-punish.

This is happening all over, in schools, in offices, in media, in Hollywood, and of course, in Silicon Valley.

Yes, Coca-Cola wants its employees to be “less white.”

Race, we are told, is a social construct. Yet every institution – public or private – in America is dedicated to promoting the anti-white mindset on a 24/7/365 basis.

Race is very, very real. Equality is the social construct. Thus the sole reason why every institution perpetuates anti-white hatred.

Put down the Coca-Cola for good.