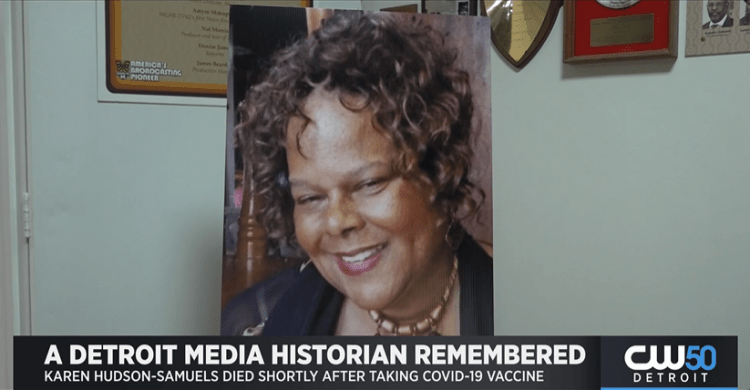 “Truth is stranger than fiction to some.”

I ask, how many more need to die before people wake-up to the reality of what is taking place here (Jeremiah 5:21)?

Over and over again, qualified doctors, on a global scale, are telling the people the dangers of vaccines (Leviticus 17:11; John 10:10), and the truth of the matter concerning the ill-designing men that are illegally pushing their lying narratives (Ephesians 4:14).

After making her name at WGPR-TV as an anchor, producer and news director, the historian and journalist used her vision to create one of the biggest accomplishments of her lifetime.

“When this museum got into the national registry she was very, very proud,” her husband, Cliff Samuels said.

The 68-year-old’s sudden death leaves the industry reciting her legacy and questioning why she had to go so soon.

“So in the spirit of Karen, I want you to always know that the times may change, but these two words that Karen understood had great power, and that is thank you,” said Greg Dunmore, TV host and producer.”

The report continues “The Detroit media icon was found dead at her home by her husband last Tuesday, just one day after taking the COVID-19 vaccine but the official cause of her death is still unknown.

“We suspect it may have just been a stroke but because of the normal side effects of the vaccine it may have masked that. Hopefully we’ll know soon from the autopsy report,” said Samuels.”

Conclusion: If people would consider the sources as from who this narrative is coming, maybe they would then consider the outcome (Matthew 7:16).