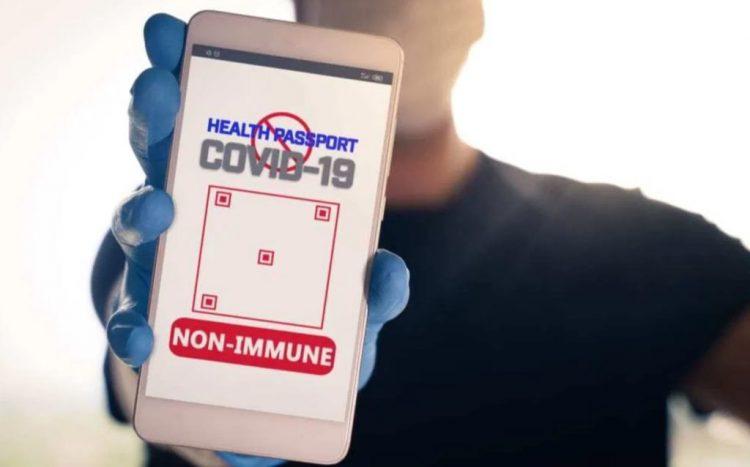 We said a long time ago that when President Donald Trump put his Jewish son-in-law, an un-elected bureaucrat, in charge of tracking and tracing people for the non-existent COVID, that we would experience a tyranny like no other.  Indeed that time has come and the rollout of “immunity passports” to travel is on the way.

Derrick Broze has the story.

As the European Union announces they are preparing to implement “vaccine certificates,” the largest airline association is also preparing to roll out their version of the controversial Immunity Passports.

On Thursday, the European Union’s 27 political leaders held a 5-hour virtual call to discuss the future of reopening travel across the continent. German Chancellor Angela Merkel told reporters the leaders have “agreed that we need vaccine certificates.” Merkel also sought to quell fears about the use of such certificates, stating, “it will certainly be good to have such a certificate but that will not mean that only those who have such a passport will be able to travel; about that, no political decisions have been made yet.”

The discussion around immunity passports has grown in recent months, with the UK, Denmark, Sweden, Iceland, and Spain all considering some method of verifying whether an individual has been vaccinated or achieved immunity from COVID-19. UK officials have also discussed the potential for the use of a digital verification tool for domestic travel. In the United States, plans for immunity passports are also being developed. On January 21, Joe Biden outlined a 200-page national coronavirus pandemic strategy which included a call for the U.S. government to “assess the feasibility of linking COVID-19 vaccination to International Certificates of Vaccination.”

The statements by world leaders comes on the heels of a press conference held by the International Air Travel Association, which represents 299 airlines. On Wednesday, Alexandre de Juniac, the IATA’s Director General and CEO, detailed the upcoming release of the organization’s own immunity passport, the IATA Travel Pass. A slideshow presentation discussing the IATA Travel Pass indicates that the organization plans to have their app fully functional by the early summer.

“With respect to health credentials these past weeks have seen more airlines sign-up to trial the IATA Travel Pass. That will help us be ready for the restart.,” De Juniac stated. He went on to say that the IATA Travel pass must be secure, work with existing systems of travel, and respect data privacy. He did not provide specific details of how privacy would be respected. De Juniac also noted that proof of vaccination and COVID-19 test results must be digital because “fraudulent COVID-19 test results are already proving to be an issue.”

The “small majority” opposed to the passports are pushing back out of fears that the passports will create a two-tiered class system where the vaccinated are allowed to travel freely, and the unvaccinated are denied the right to travel, attend concerts, visit museums, drink at the bar, and potentially even shop at the local market. Nicole Hassoun, professor at Binghamton University, recently wrote an opinion piece for Scientific American stating that, “Immunity passports may be inevitable, given current developments in the private sector and historic precedent, but in order for them to be ethical, they must at least include some exceptions. People who cannot access vaccines for health reasons but need to work, attend school, travel and so forth should be able to do so when the benefits exceed the risks.”

Regular readers of TLAV will not be surprised by any of these developments.

In May 2020, TLAV first reported the IATA’s plans for air travel in the post-COVID-19 era. At the time, the IATA issued their publication, Biosecurity for Air Transport A Roadmap for Restarting Aviation, which outlined their strategy to open up air travel as governments begin to lift travel restrictions. The IATA’s call for pre-boarding check-in using “electronic travel authorization platforms” coincided with the announcement of the Covipass and the Health Pass from Clear, both of which call for a digital ID system using biometrics and storing travel, health, and identification data.

In their May 2020 report, the IATA called for temperature screening at entry points to airport terminals and recommended “face coverings” for passengers and protective equipment for airline and airport staff. They also stated that “immunity passports could play an important role in further facilitating the restart of air travel.” Now, one year later, the IATA is helping bring that reality to life as their IATA Travel Pass joins the ranks of the Covipass and Health Pass as proposed options for allowing individuals to travel once again.

As the European Union and the IATA begin to reveal their plans for digital certificates of vaccination, some health experts are speaking out about the ethical and moral concerns regarding the immunity passport schemes. Dr. Deepti Gurdasani, clinical epidemiologist at Queen Mary University of London, told CNBC that “the scientific evidence doesn’t support” vaccine passports and, she believes, “there are lots of ethical concerns about them that I think are legitimate.”

Liberty, the U.K.’s largest civil liberties organization, has also spoke out against the concept. “One thing every suggestion has missed is that it’s impossible to have immunity passports which do not result in human rights abuses,” the organization recently stated. “We should all be able to live our lives free from unnecessary interference – any form of immunity passport would rob us of that. And history tells us that once we give up these hard-won rights, we rarely get them back.”

What was seen as fantastical and paranoid delusion just one year ago – the idea that individuals could have their lives restricted for not vaccinating – is no longer a fantasy. Immunity passports are here. It is likely that by the Summer nations all around the world will require some measure of digital certificate or proof of vaccination for travel, play, work, and shopping. The opponents of these measures need to think and act quickly to decide what, if anything, they are going to do to slow down the march towards medical authoritarianism.

tyranny.  If we don’t, we’re going to wake up and find we have been locked out of everything, and if you know history, the next step is nothing short of genocide.