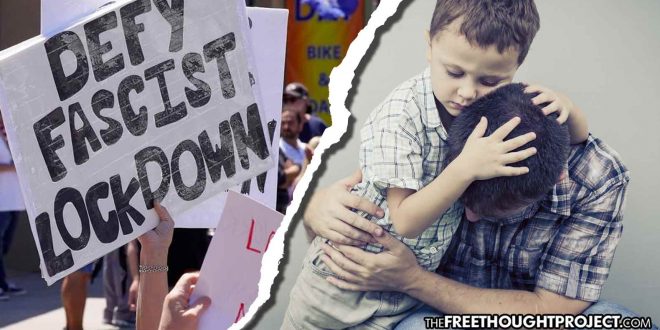 A terrifying ruling has been made in a child custody case which used the father’s beliefs over the COVID-19 pandemic to remove his children from his custody. The father used to have his children from Friday to Sunday in split custody. However, the court ruled the father’s beliefs about the pandemic are a danger to his children and he will now only be able to see them at a supervised government access center where he is required to abide by all the conditions imposed by the facility “as a precondition to access.”

Ontario Superior Court Justice George W. King said the man’s anti-masking beliefs, along with his participation in anti-lockdown protests were cause to remove the children from his custody.

“The health and welfare of the children (and by extension their principal caregiver) should not be jeopardized because of [his]  public behaviour in promotion of his opinions,” he wrote, according to CBC. The outlet did not name the father involved in the case to protect the identity of the children.

In some Orwellian act of doublethink, the court ruled that the father is free to have whatever beliefs he wishes and to lawfully express them, but just not as a father.

“I have concluded that the respondent’s behaviour is dictated by his world view. Everything else is subordinate to that view, including, but not limited to, his love for his children,” the decision by Justice King read.

Even human rights attorneys are agreeing with the court. According to CBC, Yavar Hameed, an Ottawa based human rights lawyer, said that people do have the right to express themselves but that expression is limited at the point where harm can come to another person.

“So it’s not just a matter of freedom of conscience, freedom of expression protected by the charter of rights and freedoms, it’s expressions that simply might relate because of the underlying actions on the safety of another person,” he said.

To be clear, this man did not believe the pandemic was real despite the toll it took on the health care system at its peak. But was this grounds to take his children away?

“The long-term effects of the pandemic and of delayed treatments to persons with other health conditions is currently unmeasurable,” justice King wrote.

“All of this has occurred while a percentage of our population, including [the father], continue to deny the existence, significance and/or impact of COVID-19.”

This ruling sets a rather ominous precedent over parents’ beliefs and the court deciding whether or not they are allowed custody of their children. In the future this precedent could be used deem other beliefs held by parents as a reason to take their children away. “Disagree with the government? We can now take your kids to keep them safe.” See how that works?

What’s more, many of the government’s lockdown measures have been proven ineffective and harmful to children. Should someone lose custody of their children because they factually state statistics about increases in childhood suicides amid the school closures?

Since the beginning of the pandemic, a phrase has been thrown around by blowhards in the mainstream media and politicians alike. That phrase is “we follow the science.” However, many of the folks who constantly repeat this phrase don’t seemed too excessively concerned with actually following any science at all.

The World Health Organization and others have come out for months saying that schools are safe and that school closures are leading to a slew of horrifying childhood problems.

“Schools can reopen safely,” said Dr Ruediger Krech, WHO Director of Health Promotion, back in December.

Yet those who claim to “follow the science” continue to keep children locked down and out of school — leading to an epidemic of childhood suicide. This is just one of many examples.

Despite brutal lockdowns, mandates, the complete destruction of the economy, and putting the police state on steroids across the planet, cases still shot to record levels through December and early January. Every time they rise, the politicians take to their podiums and blame the citizens for not following their arbitrary and often entirely unscientific dictates close enough. More force is threatened and more arbitrary rules rolled out. Despite the utterly horrifying effects of the lockdowns, politicians across the world keep forcing them on the citizens.

Now, at least in Canada, those who speak out against them, could be deemed a danger to their own children.