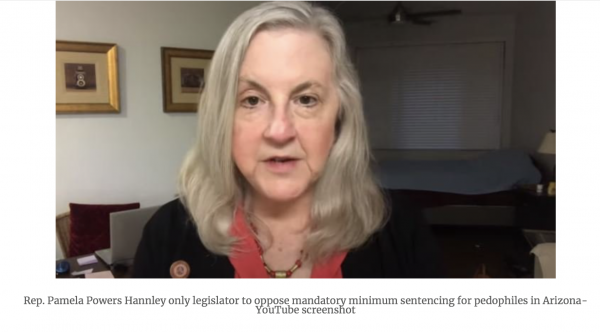 …An Arizona lawmaker is coming out in opposition to stricter punishment for pedophiles, claiming it would harm people of color, the Post Millennial reports.

Arizona bill HB-2889 would raise sentences of convicted child molesters and rapists to mandatory life in jail. That seems pretty reasonable to us.

The bill is sponsored by Republican Rep. Leo Biasiucci from Lake Havasu City in the state.

Under current law, a child sex offender in Arizona faces anywhere from 10 to 20 years in prison—with the potential for probation, parole, or work release. However not everyone, one legislator in particular, supports stricter punishment for convicted sex criminals.

A Democrat (go figure), Rep. Pamela Powers Hannley, who represents a district which includes Tucson was the only legislator who voted against the bill last Monday.

“If our justice system were fair, the prison population would reflect the country’s population in terms of race and ethnicity,” Hannley wrote on Facebook. “We all know that people of color are disproportionately imprisoned in this country.”

What Hannley loses sight of is the fact that people of color offend at a much higher rate than whites and Hispanics, therefore it stands to reason that there would be more people of color in jails and prisons.

For example an article in Psychology Today showed that while blacks comprise less than thirteen percent of the total US population, they represent half of all murder victims and offenders in the US. Therefore it stands to reason that there would be more blacks locked up than whites. It’s a simple matter of statistics.

Hannley, a 69-year-old progressive posted a video which explained her opposition to the bill, saying, “Why would I vote against this bill? Because we know that the justice system in the United States is not colorblind.”

Hannley did acknowledge that the fact the bill addressed child sexual abuse made it a “tough subject.” However she was more concerned with the importance of abolishing mandatory sentencing no matter the nature of the crime.

Hannley referred to herself previously as the “Bernie Sanders of Tucson with Hillary Clinton’s gender issues” when she launched a successful 2016 campaign where she beat in incumbent Democrat in a primary.

Hannley was the only legislator who voted against the bill, which passed the house 51-1 on Monday. The bill will be elevated to the state Senate sometime in the next few weeks.

Hannley is just another among progressives who are somehow seeing pedophilia not as a crime but as some type of psychological illness, and many in Democrat circles also claim that prosecution of pedophiles is somehow rooted in white supremacy.

According to National File, a lawmaker in California introduced legislation in that state last year which would prevent only LGBT child sex offenders from being placed in the sex offender registry, as we previously reported in Law Enforcement Today.

What will it take for the restoration of sanity in America?Because the Democrats and all those pushing criminal justice reform are making it clear their goal is to make it impossible to arrest non-whites for criminal acts, even something as vile as a child molester.
Courtesy of UNZ
Share
Tweet
Share
Pin