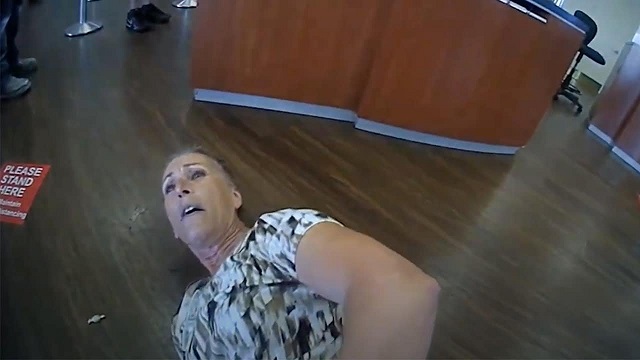 A 65-year-old Texas woman found out the hard way that Governor Greg Abbott’s order lifting his mask mandate is as hollow as his commitment to free speech.

Just a day after Texas rolled back COVID-19 restrictions, including those mandating face coverings in public, a woman’s arrest has emerged stemming from her refusal to wear a mask.

The footage, taken on Thursday, begins with an officer being directed by a bank manager to the woman. The officer encounters the woman who expresses frustration over being told to wear a mask, invoking the state’s lifted mandate.

However, the officer is heard reminding the woman that businesses can refuse service to anyone that does not comply with masking policies, which is something that Gov. Greg Abbott still allowed.

[…] The woman is taken down to the ground and arrested.

Police identified the woman as 65-year-old Terry White, who was arrested on a charge of resisting arrest and criminal trespass. Officers added she sustained minor injuries and was taken to a nearby hospital for treatment.

We know you probably celebrated after hearing that Abbott “lifted” Texas’ mask mandate (the one that he himself implemented a year ago).

Unfortunately, he determined “private businesses” have every right to order you to wear a face diaper because I guess “it’s the free market” or some bull****.

If Bank of America wants to have you arrested for not wearing a face diaper — that’s just market forces at work!

That said, these free market principles are not without limit.

For example, if a private business like Gab wants to allow free speech on a corner of the internet and the people on the site dare to express “anti-Semitic” views, that site needs to be shut down by the state as Abbott’s donors demand!