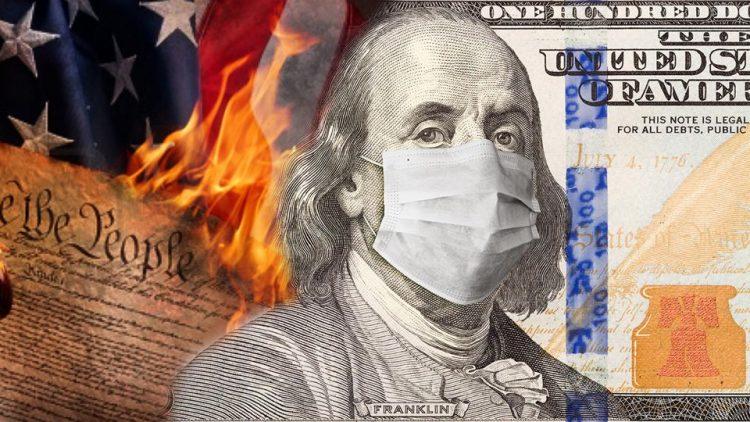 The fact of the matter is all these unconstitutional spending bills are given honorable sounding names when they are actually theft disguised as charity.  Government does not have the authority nor are they instituted for charity.  Rather they are instituted to protect the rights of the people, and among those rights are property, which money can be considered to be a part.  However, just think, in the latest round of socialist spending that continued from the Trump administration, the Biden administration is more than happy to steal your wealth, redistribute it to their buddies and toss you a few crumbs.

For the same $6 trillion in expenditure, the government could have given every federal taxpayer a $41,870 check.

Did you see anywhere near that much in benefit?

The sheer immensity of this spending is hard to grasp. For context, $6 trillion is more than one-fourth of what the US economy produces in an entire year, according to Fox Business. The COVID spending blowout is at least eight times bigger than the (inflation-adjusted) price tag of President Franklin Delano Roosevelt’s “New Deal.”

In the latest $1.9 trillion package, more than 90 percent of the spending is not directly related to containing COVID-19. Only 1 percent of the money, about $15 to $20 billion, is spent on vaccines. Meanwhile, hundreds of billions go to bailing out poorly managed state governments’ budget holes that predate the pandemic and $86 billion rescues failing pension plans. Meanwhile, billions more go to Obamacare expansion and subsidizing public schools long after the pandemic.

And that’s just scratching the surface.

The Math Doesn’t Add Up

The numbers here really are quite damning.

For the same $6 trillion in expenditure, the government could have given every federal taxpayer a $41,870 check. Or, to think about it a bit differently, it could have written every American roughly an $18,181 check.

Let’s compare this to what most Americans actually received.

TRENDING:  National Suicide? Nobody Knows Who Obama Is!

Only someone who fully collected expanded unemployment benefits throughout the pandemic and received all $3,200 in total of the stimulus payments likely received more than $18,181 in direct benefit from this spending package. And that’s a relatively small fraction of the public.

Because of the way the government used outdated (and arbitrary) income data to determine eligibility, many more taxpayers saw nothing or little in exchange for their $41,870 share of the cost, perhaps just the initial $1,200 stimulus or none at all. (Meanwhile, billions in checks went to dead people).

So, for almost all Americans, the actual benefits of the multiple pieces of lengthy stimulus legislation come in far, far below the figure that they would have received if the entire pile of money was just even split up and sent out.

How can that possibly be considered a success? In fact, it’s actually a net negative.

Too often, the stimulus conversation is simply framed around whether we should give money to a certain group of people or program—rather than also including the trade-offs and costs.

The question isn’t just: Should we send people $1,400 “stimulus” checks? It is, instead: Should we send people $1,400 stimulus checks at the cost of taking the equivalent amount (or more if you factor in waste) from other people? It’s not just whether we should send $350 billion to state and local governments—but should we do so at the cost of taking an average of $2,442 per federal taxpayer?

The Government is Not Santa Claus

Money doesn’t grow on trees. Or, as the great economist Ludwig von Mises put it, the government “does not have the powers of the mythical Santa Claus.”

“The truth is the government cannot give if it does not take from somebody,” Mises wrote in Bureaucracy. “They cannot spend except by taking out of the pockets of some people for the benefit of others.”

The government cannot create wealth out of thin air. It can only give anyone anything via three ways:

There’s no such thing as a free lunch, and, much to the chagrin of spend-happy politicians’, Santa Claus is not real. Government spending doesn’t create wealth; it only transfers wealth, generally destroying a lot of it in the process.

So, unless Americans are actually seeing equal or greater benefit from spending compared to its cost, it’s a raw deal for taxpayers. And for the federal government’s “COVID” spending binge, it’s not even close.

For almost everyone, the honest answer is no.

Frankly, I don’t want to see any benefit from government except to do its basic duty: protect our rights and nothing more.  Sadly, it’s looking more and more than we’re going to have to dissolve the current structure, and no doubt, those in power are not going to go quietly into the night.