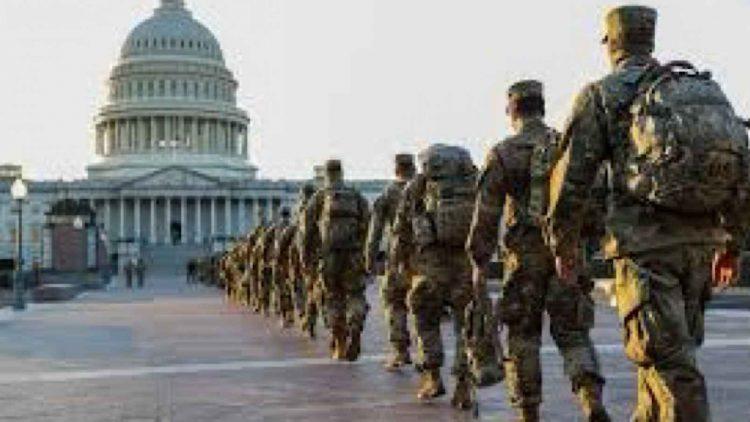 25,000 National Guard members were deployed to Washington D.C. to protect Biden’s inauguration from a threat that never existed. Even though nothing had happened since the Capitol Riot and even though the 7,000 troops already in the city, who had been authorized to use lethal force, were far more than the 2,500 troops fighting in Afghanistan, more were needed.

The Democrats deployed ten times more troops to fight other Americans than to fight Al Qaeda.

“Every state, territory and the District of Columbia will have National Guard men and women supporting the inauguration,” a public statement bragged.

D.C. was filled with armed checkpoints. Razor wire cut off the Mall as the city turned into Baghdad. Visitors to what had once been a tourist site were shocked at its transformation.

$500 million was being spent on the Biden military occupation, but it wasn’t going to the men.

The National Guard troops slept in the hallways of the Capitol and then, when their presence offended a Democrat staffer, in cold parking garages. They ate bad food and they provided Biden with a captive audience as he took his oath of office which he was already breaking.

The occupation was based on supposed FBI briefings claiming that “malicious actors may incite violence during First Amendment-protected protests.” No such protests actually occurred.

There was no emergency and there was no reason to deploy 25,000 troops in a government city that already had over 5,000 police officers, including over 2,000 dedicated to protecting Congress, with more law enforcement per capita than any single city in America.

While Republican governors, including De Santis in Florida and Abbott in Texas, began pulling out the troops after the inauguration, Democrats insisted on retaining thousands of guardsmen.

Governor Pritzker of Illinois claimed that “We must root out the dark forces of racism, white supremacy and disinformation that have created this moment.”

How exactly the National Guard was supposed to do any of that was never explained.

Republicans asked for a briefing, but got no useful answers about what all the troops were for. Instead, the Department of Homeland Security used its National Terrorism Advisory System to issue a bulletin claiming that “a heightened threat environment across the United States” would continue for weeks.

“There are several upcoming events — we don’t know what they are — over the next several weeks, and they’re concerned that there could be situations where there are lawful protests, First Amendment-protected protests, that could either be used by malicious actors, or other problems that could emerge,” Secretary of the Army John Whitley had argued.

TRENDING:  Do Not Defeat Yourself

“We don’t know what they are,” was the single sentence that revealed how baseless this was. Those weeks passed and the threat never materialized. But the D.C. occupation went on.

The March extension had been based in part on the DHS bulletin, on Whitley’s claims about upcoming events, which he admitted, “we don’t know what they are”, and on suggestions that President Trump’s impeachment could result in violence. When impeachment passed without any violence, the fallback claim was that QAnon members believed that President Trump would actually be inaugurated on March 4. That date too came and went with nothing to show for it.

The Capitol Police issued a press release claiming there was, “obtained intelligence that shows a possible plot to breach the Capitol by an identified militia group on Thursday, March 4.”

“Now they are thinking maybe we should gather again and storm the Capitol on March 4,” Rep. Adam Smith, a Washington State Democrat claimed. “Stuff like that circulates all the time, does it mean it’s going to happen, probably not.”

It didn’t. None of the previous excuses and pretexts for the D.C. occupation happened either.

“Right now, in terms of our expected stay, it is March 12,” Biden’s Secretary of Defense Lloyd Austin had told the media. “My plan is to not keep (the troops) there one day longer than is necessary

Like any good Biden appointee, he was lying through his teeth. The National Security Council had already been discussing keeping troops in D.C. through at least the fall.

The occupation was supposed to end on March 12. Instead, it’s getting a two-month extension.

The Democrat military occupation of Washington D.C. will now be extended until May 23. And some 2,300 troops will stay on even as coronavirus cases continue to rise and 50 troops were treated, some hospitalized, due to bad food being provided by the D.C. National Guard. The tainted food included worms, undercooked meat, and metal shavings, leaving the troops with no choice but to pay for their own meals to avoid being poisoned by Democrat contractors.

The reduced number of troops is due partly to the refusal of state governors to continue extending the endless occupation of D.C. And there was a prolonged negotiating process before the Democrats could even secure 2,300 troops for their unconstitutional occupation of the capital when they’re needed to deal with everything from the pandemic to winter storms.

So the Democrats are instead preparing to build a new force dedicated to occupying D.C

They and their partners have stopped even trying to link the extended occupation to specific threats after months of crying wolf about threats that never existed or never materialized.

“It’s not just about a threat assessment, it’s about assisting and supporting capabilities that the Capitol Police may now lack and may need to look at improving,” Pentagon spokesman John Kirby claimed.

Forget the threat assessments which were the entire basis for months of the occupation.

The military occupation is no longer about responding to some phantom threat. Instead, it asserts that the Capitol Police, with over 2,000 sworn officers, is incapable of doing its job and needs the National Guard there to fill in its “gaps”. Four cops for every member of Congress and 1 officer for every 3 staffers is not enough without also adding thousands of troops.

That’s also the conclusion of Pelosi’s task force, headed by Democrat conspiracy theorist Russel Honore, which called for turning the Capitol Police into the 8th largest police force in America (Congress’ private cops are currently only the 19th largest police force), and a permanent Quick Reaction Force to be most likely controlled by the D.C. National Guard.

This force would also be allowed to self-deploy even without presidential authority.

The D.C. military occupation is no longer a temporary response to an emergency. Instead, it’s becoming a permanent state of emergency with a military occupation that can be deployed even in the absence of presidential authority. The D.C. National Guard is unique because it’s the only guard that is directly under presidential control. Allowing it to bypass the president essentially turns it, or rather the Commanding General of the D.C. National Guard, into the head of an autonomous military organization capable of seizing control of the nation’s capital.

And all this fascism is being pursued by the Democrats under the guise of fighting fascism.

Biden, Pelosi, and the Democrats want to place Washington D.C. under a state of permanent military emergency. All of their pretexts and excuses have fallen apart. Every single claim of an imminent threat has failed to materialize. Instead of ending the occupation, they’re preparing to fundamentally transform the nation’s capital into an armed camp under military occupation.

The Democrats have extended their military occupation for five months. After nearly half a year of this, not a single thing has happened to justify the occupation. It’s time for it to end.

Washington D.C. doesn’t belong to the politicians. It’s not meant to be filled with troops to protect politicians from the public. The nation’s capital belongs to the people. It’s time to end the Democrat military occupation, and its perpetual state of emergency, and return it to the people.