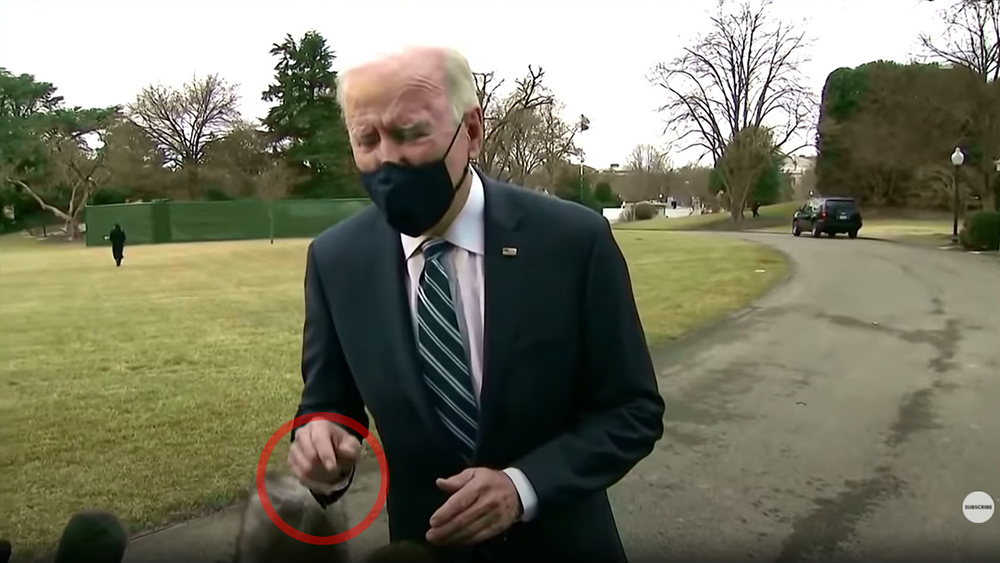 (Natural News) Before boarding Marine One early on Wednesday, fake “president” Joe Biden made a rare live appearance before the press – or at least his digital avatar did.

While speaking through his face mask, China Joe was seen waving his hands around, one of them moving behind one of the microphones apparently being held by a reporter. Even though Biden’s image was clearly standing several feet away, his hand mysteriously moved to the reporter’s side of the mic, suggesting that some kind of green screen or superimposed imagery was used to create the fake footage.

“Biden, who appeared flummoxed while briefly answering questions, appears to phase through a microphone when his hands, which are in focus, somehow move just in front of a seemingly out of focus microphone,” reported National File.

You can watch the bizarre footage, hosted at Brighteon.com, below:

The image of Biden was asked about the “migrant” crisis at America’s southern border, to which it responded that it has no plans to visit the area.

The inexplicable footage quickly circulated social media where it was picked up by multiple independent news outlets. It is now gaining so much attention that the Biden regime could be forced to address it, or else face widespread speculation that the “Biden” being presented to America is nothing more than a deepfake.

“Look at Biden’s hand and the reporter’s fuzzy microphones in the foreground at 0:10,” wrote America First host Nick Fuentes in an article about the anomaly. “This footage has been digitally altered.”

Will the real Joe Biden please stand up?

After watching the footage several times, this writer believes that the Biden image, and not the microphone, was digitally spliced into the footage.

At first glance, it seemed as though the mics were superimposed, but if you look more closely you will see that the mics, the background, and really everything else in the frame has the same grain level, while Biden appears to be clearer and sharper than everything else, suggesting that his image was superimposed.

The following screenshot tweeted by Jack Posobiec illustrates this, showing very clearly Biden hands in front of very grainy mics. Because of how clear Biden’s image appears compared to everything else, the background scenery behind him looks like a green screen.

“[T]he microphones at 0:09 and 0.10 are obvious greenscreen but if you look his feet are cut out the whole time too (because they couldn’t get the shadows right),” speculated one Twitter user.

Blake Marnell, who famously dons a brick-patterned suit that is supposed to represent President Donald Trump’s border wall, also tweeted about the obvious fakery used in the video.

“HOLY GREEN SCREEN BATMAN!” Marnell wrote above two close-up shots of Biden’s hand. “Resident Biden’s right hand appears to move IN FRONT of the microphones! What is going on here?” he added, jokingly calling him Resident Biden to imply that he belongs in a nursing home.

A clearer version of the video depicts the anomaly even more visibly, along with “green screen reflections in the mics at 9 seconds in,” tweeted commentator and columnist Ian Miles Cheong. “Not another angle, but clearer footage:”

I don’t understand this video. Look at the microphones https://t.co/LGaaOZfCRN pic.twitter.com/8I6CcuvK2f

Cheong then asked his followers if they knew of any other footage of Biden’s appearance captured from a different angle that might suggest simple “weirdness with the lens and angle.” He received what he asked for and tweeted it, offering further proof of foul play:

Another angle. It just looks weird I don’t know what to say. pic.twitter.com/Z9SsnG2C9O

As you will notice, Biden’s hand does the exact same thing even from this different angle. It moves in front of a microphone that appears unnaturally large and extra grainy, suggesting digital superimposition.

More related news about the Biden “presidency” can be found at Faked.news.