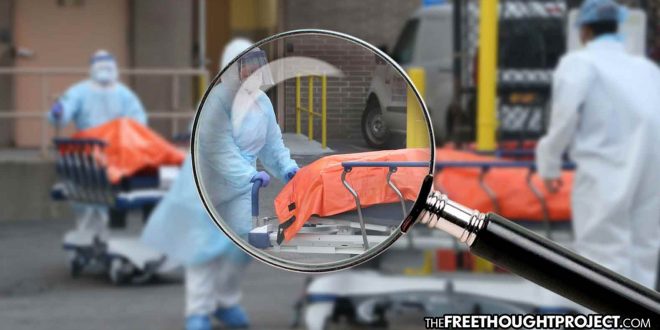 Chicago, IL — Monroe County Coroner Bob Hill is making waves in his home state of Illinois this week after he examined a portion of the list of possible COVID-19 deaths. What he found was utterly shocking and has led to calls for an audit of COVID-19 deaths in his state.

According to the Center Square, the Centers for Disease Control and Prevention listed 19,893 deaths through the end of February in Illinois where COVID-19 was listed among multiple causes. Of those deaths, about 1,830, or 9.2%, had COVID-19 listed as the sole cause of death.

That percentage is higher than it was in September 2020 when the rate was about 6%.

However, Hill calls these numbers into question after reviewing many of the cases, finding that people who died from clearly non-COVID-19 issues are being counted as dying from COVID-19.

“My concern is, I’ve reviewed several cases, (of 100 cases) about ten of them here in Monroe County, that the state has deemed COVID-related deaths and none of them have had underlying conditions or contributing factors to COVID,” Hill said. “So my concern is no matter when the person was tested positive, the state is automatically giving them a death classification as related to COVID.”

One glaring case the coroner found during his review was a man who died from an accidental drug overdose. The man died in January from the overdose but tested positive three months prior in October for COVID-19. His death was recorded as a COVID-19 death, according to Hill.

“As soon as that death came across to the state they went ahead and classified and put a statistic as a COVID death,” Hill said.

After Hill made his concerns public, the Illinois Department of Public Health and the governor responded with the health department admitting the data may change.

“Once IDPH has a chance to further investigate the data, connect with local health departments about specific cases, review death records, and conduct other quality assurance measures, the data may change,” a department spokesperson said.

“A confirmed or probable COVID-19 case will be considered if: Death is within 30 days of symptom onset,” among other factors, the department said.

But Hill found cases that don’t even come close to fitting this criteria.

“We’re seeing people on the list that they’ve put as a COVID death that have tested positive 9 months ago that have since recovered that have died from other issues unrelated to COVID,” Hill said.

Illinois Gov. J.B. Pritzker wrote off Hill’s claims, saying that the state is “doing the best they can” during this emergency to count the deaths. But is counting someone who clearly died from an overdose as a COVID-19 death, really “doing your best”.

“All these numbers, look, we’ve been in an emergency, we’ve been in a pandemic,” Pritzker said Wednesday at a stop in Lincoln, according to the Center Square. “Everybody is trying to do the best they can. There’s no desire on anybody’s part to record more or less deaths, there’s just a need to record what’s being given to us as data from the counties.”

But Hill says this is happening all the time and that’s why he is calling for an audit.

“Don’t automatically put a statistic out there of a (COVID) death when it hasn’t been confirmed what the cause is,” Hill said.

When asked for a reason why Hill thinks these deaths are being counted so erroneously, he says we should probably follow the money.

“The only assumption I can make is the hope the state is seeking some federal money coming down the system for all the numbers of deaths we’ve had due to COVID-19,” Hill said. “That’s the only thing that I can assume. Why else would you want to inflate numbers especially related to COVID.”

This sketchy death count is not isolated to Illinois either. There are cases like this from coast to coast. One insanely glaring case comes from New York in which a man was shot 7 times by police.

Ricardo Cardona, 55, was shot 7 times by New York police officers and died five days later in the hospital. His cause of death was not listed as gun shots, however. According to reports, he died of COVID-19 despite the seven bullet holes in his body. You cannot make this up