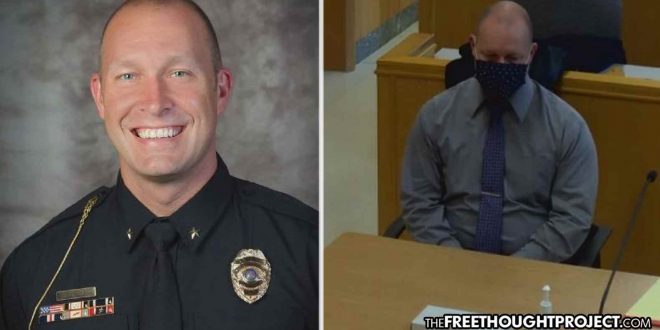 Marshfield, WI — In January, Marshfield Police Chief Rick Gramza was arrested and charged with three counts of misconduct in office, disorderly conduct, and fourth-degree sexual assault against a department employee. However, instead of facing a jury of his peers for these accusations, Gramza will be receiving tens of thousands of dollars and months of paid vacation.

According to reports, chief Gramza is accused of sexually assaulting a department employee on several occasions, as early as 2014 and as late as this past summer.

WSAW reports the Eau Claire detective sergeant investigating the case shared some specific instances the employee told him, including one in 2015, where she says she went into his office to talk about a promotion and then he sexually assaulted her.

“And made a statement similar to ‘this isn’t ever going to help you get a job,’ recalled Detective Sergeant Adam Taylor, from the Eau Claire Police Department.

The employee told Detective Sergeant Taylor she feared retaliation and when she reported concerns to human resources in 2015, that “it did not go well.”

After the accusations, originally surfaced, Gramza was placed on paid administrative leave in mid-August, but has continued to receive his salary and benefit package from the city, totaling just over $146,000. Now, he’ll be getting over $70,000 more, approaching nearly a quarter of a million dollars for roughly half a year — in which he never worked a single day.

Only a government employee could enjoy such benefits. Nowhere in the private sector would an alleged sexual predator be given a paid vacation for six months and allowed to retire with their full benefits.

Though Gramza originally faced five charges, the three counts of misconduct in office were surreptitiously thrown out last month, despite a unanimous vote to bring them in January.

Obviously if the chief is innocent, he should have kept his job or received the payout, but that has not been determined. Instead, the city appears to be simply sweeping it under the rug.

A statement from city Administrator Steve Barg released after the charges were dropped and the money handed out, claimed that the city simply doesn’t want to deal with the officer anymore, so it’s best to just let him go to avoid any further conflict.

“The city recognizes that some may be disappointed the city is not pressing forth with the proceedings,” Barg said. “Under the terms of an agreement, the city is providing Chief Gramza with a separation benefit, which the city believes will avoid greater litigation costs that the city would incur and litigating the charges in front of the commission and from any post-hearing appeals. This is a difficult but thoughtful and pragmatic choice that protects those individuals involved in that proceeding and saves the city significant costs. The city can now focus on its remedial efforts to ensure all employees understand that misconduct discovered is unacceptable and has no place in the city.”

Alderperson Ken Bargender was only one of two people to come to their senses and vote no on giving this accused sexual predator such a sweet deal.

“Back in December of 2020, this council by unanimous vote authorized City Administrator Steve Barg to file formal charges against Chief Gramza. Now, three months later and only days before the PFC hearing to begin, this same council is considering a voluntary separation and settlement agreement with Gramza. I believe due to the serious nature of the charges it is not in our best interest as a city to consider any time of settlement agreement before going through the hearing process. Furthermore, I don’t support any type of settlement agreement that would include additional taxpayers’ dollars,” Bargender said.