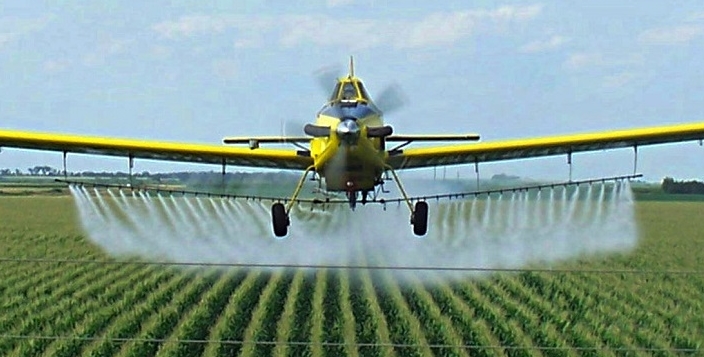 (Natural News) Are you eating pest killer food? Would you eat a plate of food if someone accidentally sprayed the whole dish with bug killer or weed killer? Are you one of those people who think there’s no cure for cancer, while you consume pesticides all day long? If you don’t want to die like a roach in a roach motel, or a rat in a rat trap, start changing your ways immediately. It’s not hard. In fact, it’s easy, fun and rewarding to eliminate these chemical-concocted, cancer-causing food criminals, one by one.

Maybe you know or recognize a few off the list, but how good of a job are you doing at not being “the filter” for the pesticide industry, as it goes from farm to table, from table into mouth, from mouth into the digestive system and cleansing organs, and from organs into your cells?

Did you know that just chemical exposure of produce leads to depleted nutrient value of those fruits and vegetables? They become adulterated, contaminated and void of value. This damage comes in the form of many pesticides, including insecticides, herbicides, fungicides, algaecides, fertilizers and any active ingredients (think deadly glyphosate here) that are directly toxic to the targeted organism(s).

To our detriment, most farmers have no clue about this chronic damage being done to nearly all non-organic food. High pesticide exposure can deteriorate your health in two days or less. You will know this when you experience headaches, dehydration, diarrhea and even vomiting. Long term health detriment includes anxiety, depression, asthma, ADHD, cancer and dementia.

Other signs of immediate inflammation are warning indicators, like that constant high-pitch ringing in your ears. Memory loss is also a common denominator with pesticides. Many bees die because they can’t even remember their path back to the nest and the honey combs. Bees are animals too, like humans, containing half the same genes as the human genome.

#1. Everything GMO – You probably suspected GMO to be on the pesticide food list, but you may not have been sure, or know just why. Most people know a little bit of information about genetically engineered foods having strange genes inserted in the crops/produce, but they don’t really realize those genes are pesticides that dissolve, destroy and kill the digestive and reproductive systems of insects, animals and humans, or kill weeds while debilitating the normal function of vital-to-life human cleansing organs, such as the liver and kidneys. This effect is backed by peer-reviewed scientific studies and research conducted by top level food scientists. Plus, realize that, in regards to anything GMO, by increasing pesticide resistance, that increases pesticide use. Let that sink in for a minute.

#2. Tap Water – Yes, the kind of fluoride dripped into most municipal tap water by the freaks at the CDC, FDA and EPA is a poisonous insecticide by-product of the phosphate mining industry in China. Fluoride does NOT make your teeth stronger, but it does cause receding gum lines, loss of IQ, and calcification of the pineal gland in your brain, not to mention cancer. This is proven in the Health Ranger’s short documentary below. A must see and great animation that delivers a strong truth message every human being should know.

#3. Soda – Most soda is made with tap water, not to even mention all the other ingredients.

#4. Most White Foods – White bread, white pasta, white flour, white sugar, white salt – it’s all bleached, and yes, bleach is a pesticide that must be regulated and registered by the EPA. Spraying insects with bleach eradicates them because they breathe through their exoskeleton. Bleach kills insect eggs instantly. Imagine what it does to a pregnant woman’s fetus, human infants and children as they develop over time.

#5. Potatoes – Most people think if they just peel their potatoes, they’re good to go. Wrong. When tested, potato samples contained MUCH MORE pesticide residue than any other crop, including chlorpropham, a highly toxic weed killer proven by science to target the human central nervous system, causing anxiety and depression. Clueless farmers use it on their garlic, onions, sugar beets, safflower, soybeans, lima beans, snap beans and more. Now you see why it’s so important to buy organic food; if not, at the least non-GMO.

#6. Milk – Oh yes, they did. A genetically modified variety of an otherwise organically produced hormone is purposely injected into dairy cows to ramp up their production of milk, which is not natural and causes diseases and udder infections. You might recognize this GMO hormone as rGBH. Avoid it at all costs.

#7. Squash and Zucchini – About 10 percent of these are GMO, and that’s why you stick with organic, just to be safe.

#8. Corn on the cob – More than 90 percent of American corn is genetically mutated to contain toxic bacteria and resist chemical herbicides, including about 10 percent GE “Sweet Corn.” Read the labels on everything to keep up with changes and sneaky advertising that hides GMO. Buy organic and local whenever you can.

#9. Hospital Food  – Nearly all hospital food is GMO, so you get sicker while you’re sick and trying to be healed. How ironic, yet planned.

#10. Animal Feed – Farmers feed their animals GMO ‘meal’ from corn, soy and alfalfa. Oh yeah, we left this one out earlier, so here’s the correct sequence of events for GMO-everything: Lab to farm to animals to stores to humans to digestion to organs to cells to cancer and dementia.

Now watch the Fluoride Deception, a short film created by the Health Ranger, about the true story and the gruesome health consequences of consuming US tap water daily…

Tune your internet frequency to Pesticides.news to find out about endocrine disrupting agro-chemicals that are wiping out humans as we speak.