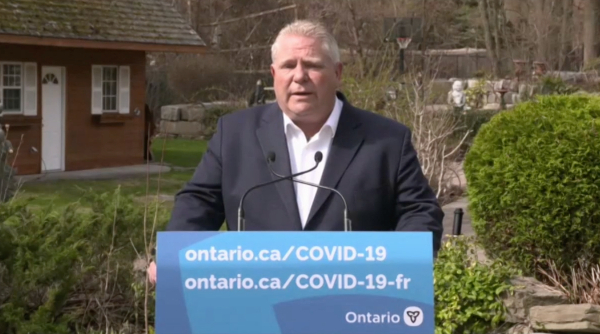 (Natural News) The leader of one of Canada’s provinces has put his American political counterparts to shame by actually stepping up and taking responsibility for getting a lot about the COVID-19 pandemic response wrong and harming people in the process, to include the enduring, draconian lockdowns that destroyed economies and livelihoods for no good reason.

Doug Ford, the prime minister of Ontario, who is currently in self-imposed quarantine at his late mother’s house in Etobicoke after a staffer tested positive for the virus, told a news conference he wanted to “address the events of this past week” following the implementation of new measures his government put in place following “extremely troubling modeling,” the CBC reported.

The objective was to curb mobility, Ford said, but it wasn’t the right decision.

“We moved too fast,” he said, adding that some of the implemented measures went too far in curbing Canadians’ rights and freedoms.

“Simply put, we got it wrong. We made a mistake. These decisions, they left a lot of people really concerned,” Ford said. “For that I am sorry, and I sincerely apologize.”

The premier and some of his top cabinet ministers have been under fire after announcing last Friday that the province would close playgrounds and hand police arbitrary powers, among other additional measures, in a bid to curb the third wave of the pandemic.

The public outcry to both moves was so swift and fierce that the government reversed course on both within days of the announcement. Members of the Ontario COVID-19 Science Advisory Table also disavowed the decisions, making clear in interviews with media that they were not based on their own recommendations to cabinet.

Various sources close to the government told CBC News the decisions came amid panic over the latest modelling for the pandemic and fears that Ford’s approval among voters would suffer badly if he was not seen to be taking action.

Ford appeared to shed some tears during the Thursday news conference while talking about how hard the pandemic lockdowns have been on businesses, healthcare workers and Canadian families.

“I understand your frustration,” he said. “This experience, this pandemic, it’s something that has affected every single person.”

That is no doubt true.

Increasingly, Canada — long known for its tolerant, laid-back style of liberal government — is being seen by the outside world as increasingly authoritarian, all under the guise of trying to ‘protect’ citizens from a virus that clearly is not the world-ending strain we’ve all been told it is. (Related: Martial law strategies: How to hide your survival stockpile.)

During a recent show, The First TV’s Jesse Kelly noted that overall, the Western left has used the virus to channel their inner Stalin, and that is also true of Canadian leaders.

“Have you been watching this stuff in Canada, with what they’re doing with the coronavirus lockdowns?” Kelly said, going on to recount his previous coverage of a church that was raided by hundreds of police after defying orders to close down.

He went on to show a clip of Canadian police officers repeatedly punching an elderly man while destroying part of his porch railing in an attempt to arrest him for some violation.

“Look at what these cops are doing,” says a man taking the video. “They hit him in the head, they’re breaking his balcony. This is an old, frail man.”

He then pointed to a group of Canadians who recently stood at the border facing the United States holding their country’s flag upside down, the international distress signal, while sending an “SOS” in Morse code using a light.

“Do you understand what’s taking place up north?” Kelly asked. “I want you to understand this. Like, ten minutes ago, Canada was your standard Democrat buddy. That’s all they were. ‘Ah, he’s not that bad! He’s not one of these radicals! He’s left, I realize that, but he’s not that bad. It’s fine.’