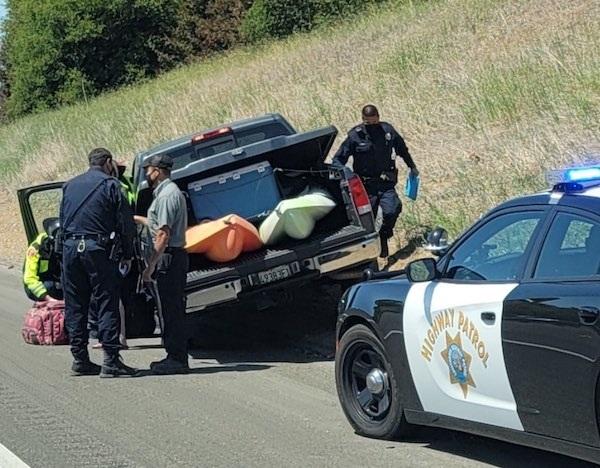 Those taking the experimental COVID injections have not only put their own health and well-being at risk but are now putting the public at risk.

First, The Sons of Liberty’s health and wellness expert Kate Shemirani said that she will no longer see patients who have had the injections due to possible shedding

Additionally, there are things happening to people who have taken the experimental shot which have caused them to have seizures, putting others at risk on the road and elsewhere. California has such a story.

The California Highway Patrol has responded with a statement regarding the accident that occurred on Highway 101 Northbound on Friday in Atascadero.

According to Officer Jose Meza of the CHP, on Thursday at 1:40 p.m. on Highway-101 Northbound, North of San Anselmo Rd, a 73-year-old driver driving a Nissan Titan suffered an unknown medical event.

Per his wife (right-front passenger), he went blank and started holding his chest. He started braking and his wife steered the vehicle to the shoulder of the road. A semi-truck clipped the Nissan as it was slowing.

The wife forced the Nissan’s gear into park and came to a stop. The driver was transported to Twin Cities Hospital, CHP reports.

According to a California Highway Patrol incident record, the driver’s spouse reported that they were on their way home from receiving a second dose of the COVID-19 vaccine. A second vehicle that was involved in the accident reportedly left the area.

These kinds of incidents are now being referred to as “vaxxidents.

ot.Article posted with permission from Sons of Liberty Media