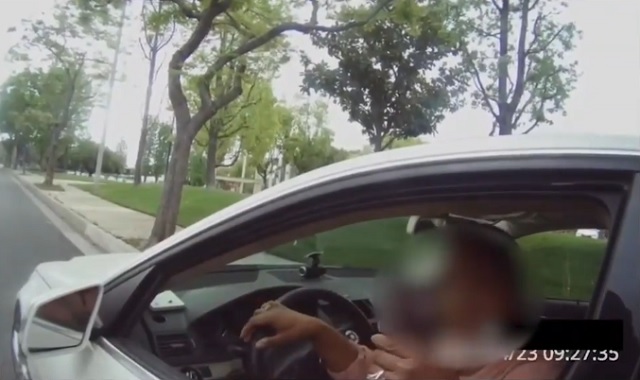 Viral video out of Los Angeles County shows a professor berating a Hispanic police officer as a “murderer” during a routine traffic stop and telling him “you’re always going to Mexican” and “you’ll never be white.”

Please keep in mind while you watch this that black folx are *literally terrified* that police will kill them at any moment just for being black.

NEW: "You're always gonna be a Mexican, you'll never be white, you know that?"
A Latino LASD deputy sent me his bodycam video of a woman claiming to be a teacher launching into a racist tirade against him when he pulled her over in San Dimas. She repeatedly calls him a murderer. pic.twitter.com/Cc8jSVenCQ

“LASD tells me the woman called them after this traffic stop to file a harassment complaint against the deputy with internal affairs,” Fox News’ Bill Melugin reported. “San Dimas station doesn’t have official bodycams yet, the deputy tells me he invested in his own personal cam to protect himself on the job.”

“LASD also tells me the woman has a history of making false complaints against deputies,” Melugin said. “I’ve learned what her name is, and she has been a professor at schools in the LA area, but at this time, I will not be identifying her because she has not returned any of my calls or emails.”

Here’s my live segment discussing this on @FoxNews tonight. https://t.co/UlJv6h9MyD

ng cops quasi-canceling anti-racist/anti-police activists with footage recorded on the job with bodycams. They’re not identifying her explicitly by name but one would assume there’s enough information out there to figure out who she is.

I don’t like the idea of cops canceling people like this when all they’re guilty of is a minor cell phone infraction but I do like fighting fire with fire and it’s possible if this becomes a trend libtards could actually turn against the cancel culture they’re so fond of.

Leftists have started turning against police bodycams lately because their black victimization narrative is imploding due to incidents like the shooting of Ma’Khia Bryant.

Just one day after that shooting went viral, Vox released an article calling for a ban on police releasing footage of them shooting “Black and brown” people because it “reinforces white supremacy.”

If we took the woman above at her word then we’d have to believe she was stopped by a “Mexican racist” who stopped her not because she was texting while driving but because he wanted to “murder” her.

“You scared me and made me think you were going to murder me,” the woman told him. “It’s not just a feeling, you’re a murderer!”

Perhaps he should be indicted and subject to a show trial just like Derek Chauvin to validate the professors’ lived experience!