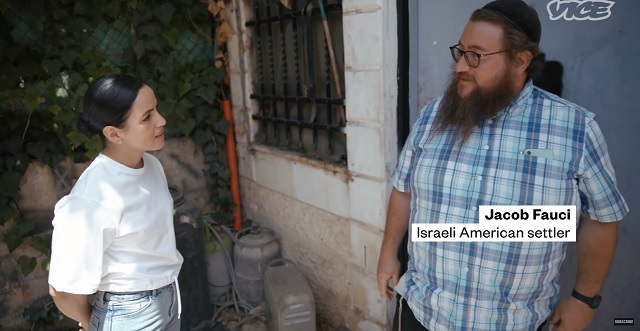 VICE has managed to snag an interview with Jacob Fauci, a Jewish New Yorker from Long Island who went viral for telling a Palestinian woman complaining about him stealing her home that “If I don’t steal it someone else is going to steal it.”

On Wednesday, VICE released an piece with both Fauci and the woman having her home stolen in Sheikh Jarrah.

Fauci told VICE he was “chosen” by a US-based group, Nahalat Shimon International, to occupy the home and “make sure that this neighborhood is not lost in any future peace deal.”

He refused to say whether he paid rent to live in the home. It seemed to be implied that NSI is actually paying him just to occupy their land.

Fauci said that whether he or a “giraffe” or a “monkey” lives in the house Palestinians are “not coming back into this house ever.”

VICE: So, your position here is a political position to keep Palestinians out of it?

FAUCI: Not to keep Palestinians out of it, to keep Jews in it.

VICE: And therefore keep the Palestinians who were here out of it.

That’s a– That’s a necessary evil.

FAUCI: And they’re not coming back in here.

“Since the 1990’s, right-wing settler organization Nahalat Shimon International has vigorously fought for the eviction of Sheikh Jarrah’s Palestinian residents, and the subsequent replacement of them with groups of Israeli settlers,” Mondoweiss reported earlier this month.

“So far, the group has been successful in every one of their endeavors in the neighborhood, and with the backing of the Israeli district court and full support of the Israeli authorities, have displaced more than 67 Palestinians from Sheikh Jarrah, and continue to seek the imminent displacement of around 87 more,” Mondoweiss continued.

“In addition to the six families under threat of immediate expulsion, an Israeli district court also ruled earlier this year that seven other families in the neighborhood should leave their homes by August 1st.”

“In total, 58 people, including 17 children, are set to be forcibly displaced from Sheikh Jarrah to make way for Jewish settlers this year alone.”