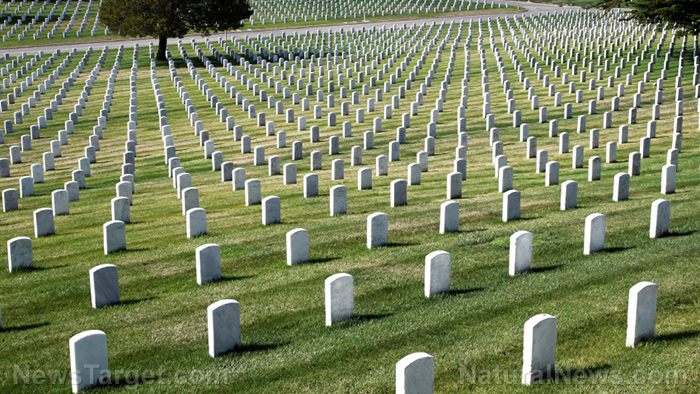 (Natural News) When you get cancer really bad and the cells are taking over your vital organs or brain, and once you’ve been given several rounds of chemotherapy, surgery and radiation, and nothing’s changing, the doctors send you home to die. That’s because the mechanism in your cells that controls the reproduction is broken in cancer cells, so they can reproduce uncontrollably, and that’s hard for your body to beat back, especially when you’ve been “carpet bombed” with chemo and radiation “treatments.” Well, come to find out, the SARS-CoV-19 mRNA vaccines make your cells function in a very similar warped and dangerous way.

The spike proteins that the CDC and every MD are spewing advice about are the same spike proteins that scientists recently discovered find their way into the bloodstream and multiply uncontrollably, causing blood clots, heart damage, brain damage, and can kill human babies before or after birth. So what happens to America’s work force when everybody that’s inoculated starts dropping like flies? It won’t be the unvaccinated that can’t get a job, because that may be the only living folks left.

The Covid vaccines are like cancer-causing vaccines, because the spike proteins reproduce out of control, just like cancer cells

The Covid vaccines are like cancer, because they instruct the body’s DNA to produce proteins uncontrollably by destroying the mechanism that controls production, and replacing it with one that your human body does NOT control. That’s what mRNA really means, and this is pro-science, real scientific research being made available by a viral immunologist, mRNA vaccine researcher, and associate professor named Byram Bridle, who works at the University of Guelph, Ontario.

Folks, this is the ultimate Paul Revere call, but this time it ain’t the British that are coming for your guns and your freedoms; it’s the vaccine manufacturers and the Marxists planning a genocide-style wipeout of 150-million-plus Americans. The rest of us “non-vaxxers” will be employed, no doubt, to help carry all the vaccinated bodies to the FEMA-funded crematoriums located in every Metropolitan city.

“We made a big mistake. We didn’t realize it until now,” says Byram Bridle, a viral immunologist who’s now admitting that the spike proteins the mRNA vaccines force the human DNA to produce aren’t preventing disease and disorder but creating disease and disorder. He calls these spike proteins a dangerous toxin for the body, brain and central nervous system. It was a “big mistake” says Bridle. The protein is now linked directly to blood clots.

Will the booster shots for Covid boost the uncontrollable production of spike proteins in the blood, the same way flu shots boost cancer?

Just how many people are going to die from this, because it’s not a matter of “if” anymore — it’s when and how many. Will Amazon and Craigslist join forces with FEMA and DHS and recruit a bunch of workers (the unvaccinated) for assisting companies responsible for the mass burials (probably at sea) and mass cremations?

“We thought the spike protein was a great target antigen, we never knew the spike protein itself was a toxin and was a pathogenic protein. So by vaccinating people we are inadvertently inoculating them with a toxin,” the virus researcher added. He said it’s not so easy to find in Google, but there’s many more avenues for finding out the real science behind all this madness of rushing to vaccinate the world against a virus that’s only killing .4 of one percent of humans (and that’s mostly people fighting cancer, diabetes and heart disease already).

Now, before all you crazy naysayers try to discredit this virologist, he just so happens to be so good at what he does that he was awarded a $230,000 government grant LAST YEAR to develop the Covid vaccine.

Virologists had made hypothesis about mRNA working like traditional vaccines, but the spike protein gets into the bloodstream and circulates for days following injection, then accumulates in the liver, spleen and adrenal glands, and in very high concentrations in the ovaries. Talk about population control. This “all-in-one” inoculation kills those alive while preventing new births from ever coming to be.

And that folks, is why the CDC, the CCP, and the Biden Regime are pushing SO HARD for that 70 percent vaccinated threshold (genocidal tipping point for installing communism literally overnight in the USA). This is not just too much mercury in a flu shot, this is a series of vaccines that instruct your cells to clog your blood.

What’s next for the vaccine Nazis?

So, what’s next for the vaccine Nazis? Before they come door-to-door and force vaccinate everyone at gunpoint, there are several more “stops” to pull out for the insane Marxists to reach their genocide goal of vaccinating at least 70 percent of the US populace, marking them for the big extinction event. Here’s how it will most likely all play out:

Soon, all corporations, chain stores and large scale companies will demand full vaccination with proof of CDC vaccine cards, bracelets or passports for all employees to keep their job.

Soon, all small-to-medium-sized businesses, including all of those self-run, will be bankrupted by the upcoming “Plandemic II” long-term lock down.

Soon, nobody will be allowed to travel international or even state to state without a vaccine passport.

Soon, no hospitals or doctors will be allowed to see patients who are not vaccinated, not even for emergencies at the hospital (unless you agree to the death jabs when you arrive).

Tune your internet frequency to Pandemic.news for updates on these crimes against humanity being delivered under the guise of inoculation. Plus, learn how to best prepare for the upcoming VACCINE PANDEMIC and communist apocalypse. Now hear the whistleblower of the century talk about the REAL SCIENCE behind mRNA: