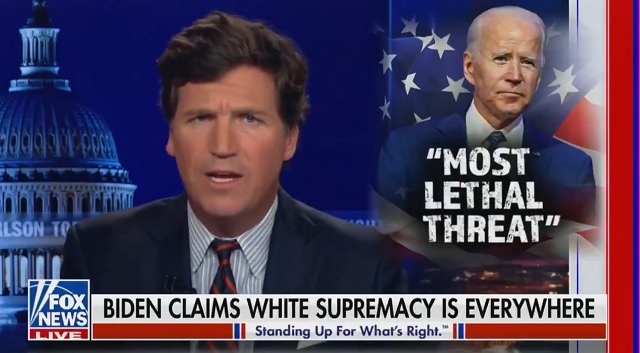 Tucker Carlson delivered a fiery monologue on his show Wednesday night wherein he denounced Joe Biden’s “disgusting” speech in Tulsa as an anti-white “racial attack” and debunked Biden’s claim that so-called “white supremacy” is the greatest threat to America.

“During the speech, Biden declared that the most lethal threat in the United States is not the cyber attacks, for example, shutting down our supplies of essentials like gasoline and meat, it’s not terrorism, it’s not gang warfare, no, it’s people who don’t agree with Joe Biden,” Carlson said. “He calls them ‘white supremacists.'”

Carlson played a clip of Biden declaring that “terrorism from white supremacy is the most lethal threat to the homeland today” and noted how Biden didn’t define what a “white supremacist” even is.

“Corporate America has tried to answer that question through one of their proxies, a think tank called the Minority Corporate Council Association,” Carlson said. “Now the board of that group has representers from US Steel, Freddie mac, Microsoft, heavy hitters. According to that group, the Minority Corporate Council, white supremacy means ‘having a can-do attitude’ and a ‘tendency to rugged individualism.'”

“So that’s the threat that Joe Biden’s DHS and the FBI, the intel community, the US military, they’re all warning about.”

Carlson continued: “According to the Global Terrorism Database managed by the University of Maryland, a total — and we’re always about getting the numbers — a total of 64 people in this country were killed between the years of 2015 and 2019 due to those rugged individualist white supremacists and/or nationalists.”

“Now those numbers aren’t real,” Carlson said. “Actually dig a little deeper and they don’t stand up to scrutiny. In fact, that total 64 counts the Parkland school shooting as a ‘white supremacist’ attack, which as far as we know it was not but even if you take that number at face value, if you assume it’s accurate, it would mean there are a total of 16 white supremacist nationalist killings per year on average.”

“For comparison, 774 people were murdered in the city of Chicago alone just last year! And very few of the perpetrators were white nationalists, we can tell you! Those trends hold up nationally, in 2019 there were 11,000 arrests nationwide for murder. Young black men made up a majority of those arrests despite being about six percent of the overall population. So there’s no credible way to argue that ‘white supremacy’ is the most lethal threat that we face — that’s not an argument, it’s its own form of racial attack!”