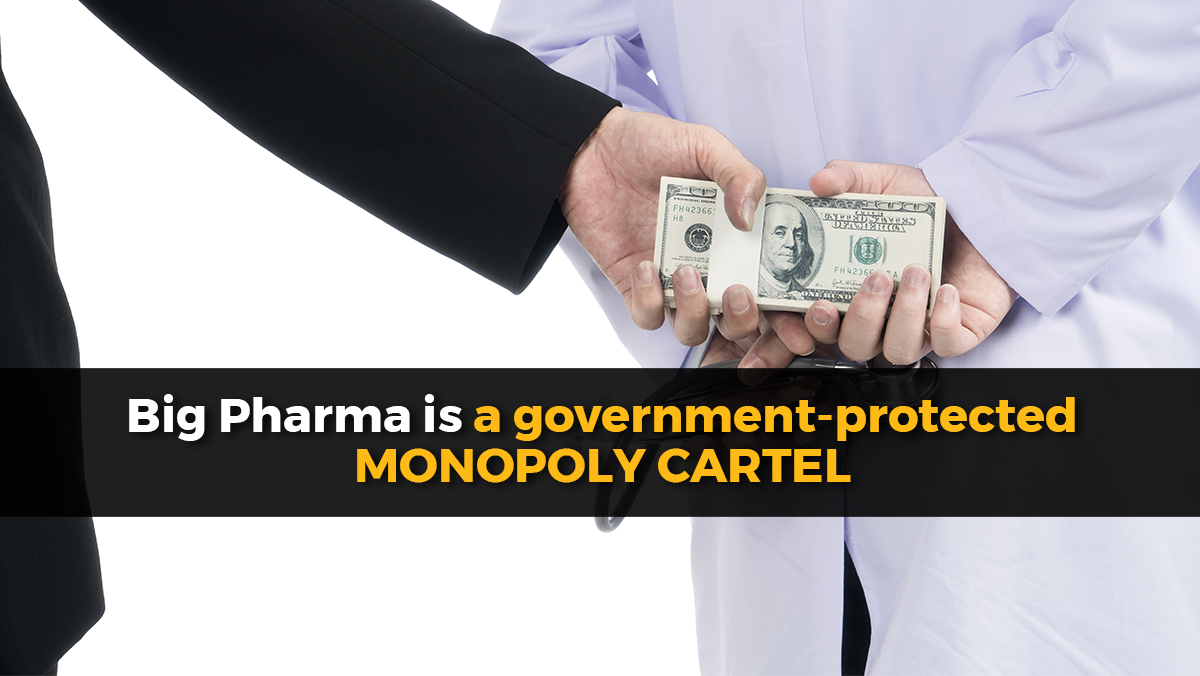 Natural News) From August 2013 to December 2018, the pharmaceutical industry paid out more than $12 billion (in disclosed payments) to 1,036,163 doctors, 1,249 teaching hospitals, and 2,191 companies. The current model of “medicine” incentivizes bribery, kickbacks, and institutional control over the scientists, the media and medical professionals. This Big Pharma-dominated system is also legally permitted to market directly to consumers, allowing for perpetual brainwashing of the general population and the medical professionals.

Even worse, Big Pharma is set up in a way to generate high returns for their shareholders; the system is NOT incentivized to promote a healthier population. This high-return incentive brings out the most appalling behavior and the most anti-human business decisions.

Big Pharma has convinced entire populations there is no natural immunity, no solutions for infections

For instance, during the covid-19 outbreak, some doctors were brave enough to use safe, inexpensive antivirals such as hydroxychloroquine, zinc, ivermectin, glutathione, vitamin D and C. But instead of promoting safe, anti-viral treatments that are easy to manufacture, the Big Pharma establishment fought to suppress treatments and other approaches to help the population mount a healthy immune response.

This is nothing new, for those who understand how this monopoly works. Over the decades, nutrition and traditional herbal medicine have been systematically removed from Western medicine. This suppression of vital information and natural immunity solutions ultimately paves the way for emergency use authorization of “too big to fail” vaccine investments. As these corporations fight for dominance, their influence over the regulatory agencies, the media, and the “science” leads to unethical business activities and is the reason why no pharmaceutical company can be trusted.

In 2020 alone, Pfizer, GlaxoSmithKline, Johnson & Johnson, Sanofi, Gilead and AstraZeneca generated a combined revenue stream of $266 billion. Even though the industry is flush with cash, the U.S. federal government handed the Big Pharma monopolies at least $18 billion in taxpayer funds to develop covid-19 vaccines. This siphoning of wealth from the American people is conducted without a single vote from the people themselves. Congress does not represent the Will of the People; they, too, are bought off by this Big Pharma monstrosity.

In the most recent decade, GlaxoSmithKline (GSK) was fined $3 billion for doling out kickbacks to U.S. doctors. In Great Britain, GSK was fined for bribing generic drug producers. GSK published an article in a medical journal that misled parents about the safety of an antidepressant for their children. To make an extra $100 billion, GSK jacked up the price of an asthma inhaler by 18 percent on the U.S. market. As shareholders cash in, hurting people are made more susceptible.

Pfizer also hiked up the price of critical medicines that patients rely upon. Pfizer jacked up the price of an anti-epilepsy drug that 48,000 U.K. patients needed. In one year’s time, the National Health Services had to pay over twenty-five times the original price of this drug just to keep these patients alive. Overall, U.K. wholesalers and pharmacies faced price hikes of 2,300% – all so Pfizer could reap $16 billion in profits last year alone. In a drug trial in Nigeria, Pfizer took advantage of an outbreak, lied about their experimental meningitis treatment, and subjected children to risky experimental drugs, while not providing adequate informed consent to parents. Pfizer ultimately had to pay out $75 million to affected families – pennies compared to the amount of money that the federal government bailed them out within 2020.

Johnson & Johnson (J&J) is currently the most successful pharmaceutical corporation in the world, with $82 billion in revenue over the past year. This success is built on unethical price hikes as well, including an unprecedented 19% price hike on leukemia and prostate cancer drugs and a 16% price hike on an HIV medication.

AstraZeneca builds its empire by suppressing generic drugs that could bring more affordable options to patients. The European Court of Justice recently backed the European Commission and ruled that AstraZeneca abused its market position to stall generic drugs. AstraZeneca manipulated the markets by de-registering its market authorization for Losec, at the same time they introduced a second-generation version of the drug. This tactic withheld the clinical trials long enough to block generic drug manufacturers from bringing a cheaper alternative to the market.