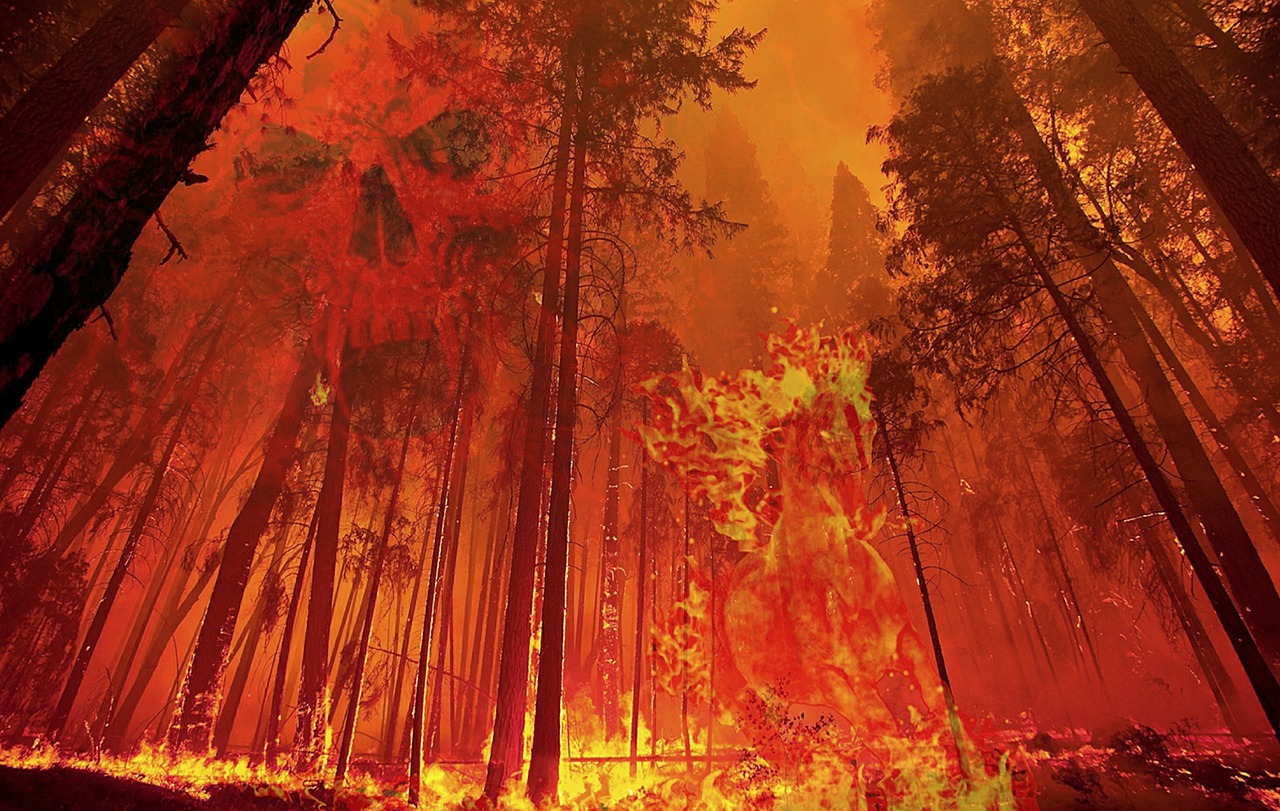 Have you noticed that apocalyptic wildfires have been erupting all over the globe this summer?  Of course every year there are wildfires, and that has been true all throughout human history.  But what we are witnessing this year has truly been unprecedented.  In just the past couple of weeks, we have seen historic fires in the United States, Greece, Italy, Turkey, Lebanon and Russia.  Hundreds of colossal fires are currently raging around the planet as you read this article, and we are only about halfway through the summer at this point.  Authorities are warning that more gigantic fires are surely coming during the second half, because much of North America and Europe is dry as a bone right now.

At this moment, nearly the entire state of California is either experiencing “extreme drought” or “exceptional drought”.

This has created ideal conditions for wildfires, and over the weekend the Dixie Fire actually became “the largest single wildfire in recorded state history”…

We have witnessed some incredibly large fires in California in recent years, and so for the Dixie Fire to take the number one position is really saying something.

And it is still out of control.  As I write this article, the fire is “less than a quarter contained”…

The Dixie Fire was less than a quarter contained after burning through more than 700 square miles in Northern California’s Butte, Plumas, Tehama and Lassen counties. At least 400 homes and other structures have been destroyed, Cal Fire said.

The fire was the largest among more than major 100 wildfires in 15 states. Those fires have burned more than 3,500 square miles, according to the National Interagency Fire Center.

California desperately needs this drought to come to an end, because water levels just keep dropping lower and lower.

Earlier today, I was stunned to learn that a major power facility at Lake Oroville has had to be shut down because the water level there has fallen so low…

It’s the first time the state has shut down the Hyatt Power Plant due to depleted water levels since the plant went into operation in 1967.

As bad as things are in California, it could be argued that conditions are even worse in Greece right now.

Absolutely enormous wildfires have been roaring through vast stretches of the country for the past six days, and this has created an unprecedented national emergency…

Raging wildfires have ripped through parts of Greece for six straight days, forcing thousands to flee as the blazes threatened entire towns and burned down homes, shops and vast areas of land in their path.

An unprecedented heatwave — Greece’s worst in three decades — sent temperatures soaring over the past week as firefighters worked tirelessly to extinguish the uncontrollable flames.

Record-breaking heat helped to set the stage for these historic fires.  At one point last week, the ground temperature in downtown Athens actually reached 55 degrees Celsius…

Little had prepared any of us on the Athens-bound flight for the sight of the great fire-induced clouds that swept either side of the plane as it made its descent on Friday.

News of the extreme heat engulfing Greece had spread beyond its borders all week, packaged in increasingly desperate language. Temperatures were breaking records few had ever imagined. If Monday was bad, then Tuesday was worse. In some parts of the country, the mercury had hit 47C (117F), with thermal cameras on drones recording the ground temperature in downtown Athens at 55C.

If you would like to get a feel for how apocalyptic things have become in Greece, just check out this video.

The fires just continue to creep closer to the capital, and it is being reported that “ash is raining down” on downtown Athens…

“It’s been crazy over here. Between the extreme heat and the wildfires, it feels apocalyptic,” Eleni Myrivili, a friend recently appointed to the role of Athens’ first chief heat officer, wrote in an email on Thursday as the army was deployed to assist firefighters. “Ash is raining down on us here in Athens.”

For other areas of Greece, the devastation has been almost unimaginable.

In fact, one Greek politician used the term “biblical catastrophe” to describe the level of destruction in one particular municipality…

Prior to the fires in Greece, the enormous wildfires in Turkey were getting the most attention in Europe.

According to NASA, at one point more than 130 wildfires were raging simultaneously in that nation…

In the midst of a severe heatwave and following months of dry weather, Turkey is facing some of its worst wildfires in years. Over the past seven days, more than 130 wildfires have been reported across 30 Turkish provinces. Most of the fires have ignited along the Mediterranean and Aegean Sea coasts, several in resort areas around Antalya, Mugla, and Marmaris.

Elsewhere in the northern hemisphere, the scale of the wildfires in Russia has been truly breathtaking.

They aren’t being given a lot of attention by the corporate media in the western world, but so far the wildfires in Russia have burned more than 3.7 million acres in Siberia alone…

The extraordinary forest fires, which have already burned through 1.5m hectares (3.7m acres) of land in north-east Siberia have released choking smog across Russia’s Yakutia region, where officials have described this summer’s weather as the driest in the past 150 years. And that follows five years of hot summers, which have, according to villagers, turned the surrounding forests and fields into a tinderbox.

I could go on and on, but I’ll stop there.

These fires should be a huge wake up call for all of us, but most people will probably forget about them in a few days unless they live in one of the affected areas.

That is extremely unfortunate, because we need to be paying attention.  Our planet is rapidly changing, and many believe that what we have witnessed so far is just a small preview of what is coming in the years ahead.

We have grown accustomed to using words like “apocalyptic”, “catastrophic” and “cataclysmic” on an almost daily basis.

If you doubt me, just go to Google News and do a search for those terms.

Historic disasters are happening in such rapid fire fashion that many of us have now become numb to them.

I have been warning that we would start to see an acceleration of events, and what we have witnessed so far is just the beginning.