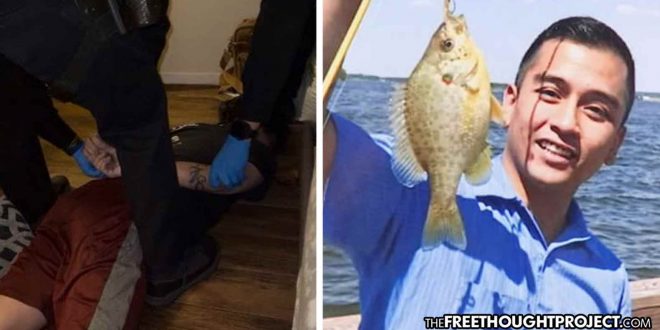 Antioch, CA — The family of a 30-year-old US Naval veteran has filed a federal lawsuit this week against the city of Antioch, its police chief and four police officers after police showed up to a call for mental health help and their beloved son and brother died shortly after. The family claims, and has video evidence they say backs up these claims, that cops handcuffed Angelo Quinto, before kneeling on his neck, killing him.

According to his family, Quinto had been slipping in and out of episodes of paranoia after he sustained a head injury. On December 23, Quinto was in the midst of a crisis and his family felt they had no other option but to call 911 for help — a choice they undoubtedly regret making today — after Officers James Perkinson, Arturo Becerra, Daniel Hopwood and Nicholas Shipilov showed up that day.

“Every day of our lives we live with guilt, no matter how much anyone … tell(s) us that we did the right thing, that we did everything that we possibly could,” Quinto’s sister, Bella Collins, said while wiping away tears, according to ABC 7.

On that December day, Quinto reportedly became agitated and scared that his mother and sister would leave him. Worried for his health and what he might do, Qunito’s sister called police.

“He was asking us what’s happening, what’s going on?” said Collins. “We’ve experienced this before but we didn’t associate it with mental health.”

According to the family, by the time police arrived, Quinto had calmed down, but his mother, Cassandra Quinto-Collins was still holding him tightly on the ground.

According to an attorney for the family, that’s when police escalated force and began manhandling Quinto.

“He was snatched from his mother’s arms, thrown to the ground. Police jumped on him and literally put a George Floyd-tight hold on the back of his neck,” the family’s attorney John Burris said.

“It is very much like George Floyd and I hate to use that as an analogy, but the truth of the matter is, it was a lack of appreciation for what was going on,” said Burris.

“One officer was holding his legs and the other officer had his knee or lower leg here,” Cassandra told KTVU.

Sadly, however, according to Cassandra and Bella, police did not know what they were doing and their actions may have led to Quinto’s death. Now, Bella feels the guilt for making that call.

As the video below shows, when they flip Quinto over, a smear of blood is visible around his mouth, as is a pool of blood on the floor. Quinto’s sister told the SF Chronicle that “His eyes were rolled up in his head,” and that he “looked purple.”

According to police, however, they did not use any physical force and while they were handcuffing him, Quinto went into a medical emergency. As the Mercury News reported in January.

Antioch police Lt. John Fortner said the call came from a member of Quinto’s family. He said while officers handcuffed Quinto, they didn’t use physical force like a taser, pepper spray, baton, or strikes to his body. The officers had already called for an ambulance to place Quinto in a mental health hold when he began experiencing a medical emergency.

“They had the ambulance step up their response,” Fortner said. “(The ambulance) transported him to hospital, they stabilized him for three days and he unfortunately passed away.”

The investigation is still underway and the department has said that the cause of death has yet to be determined, however, the police apparently tried to steer the narrative into their lane by lying. According to the lawsuit, the officers falsely told paramedics that Quinto was on methamphetamine and ransacked the family’s home but they found no evidence of drug abuse.

“There are a lot of issues wrong here,” Burris said. “The technique applied by officers. The failure to de-escalate. The jumping on his back, the putting into his neck by a knee…Given what we know, which is that we had a healthy young man in his mother’s arms. The police grabbed him. They themselves, their conduct, snuffed the life out of him. We see that not only as a violation of his civil rights but it’s a violation of humanity, frankly.”

“I’m always going to regret calling the police and hope no one has to regret doing what they think is the right thing,” Bella said.

Unfortunately, police responding to calls for mental health help, often times ends in the death of the person in need. This is why cities across the country are moving away from sending cops, and sending qualified experts instead. As we reported, these experts are resolving the situations every single time without violence and without arrests.