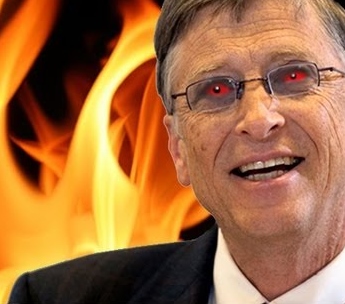 (Natural News) (Op-ed) Mega-rich, fake philanthropist Bill Gates has been exposed, through his own admissions on video, saying that he wants to rid the planet of a few billion people, so he’s in damage control mode now, showing up on fake news everywhere trying to seem like a nice guy who cares. Recently divorced from Melinda, Bill the “pharma shill” Gates, has launched a campaign of disinformation about Covid vaccines, global warming and GMOs in food in order to fulfill his depopulation agenda. As of late, Bill Gates is blaming the unvaccinated for spreading death, instead of the deadly Covid-19 vaccines he’s funding and promoting so virulently with propaganda.

The tech geek billionaire is wildly claiming that 95 percent of all Covid deaths so far are unvaccinated people, which is impossible data for him to have already acquired. In fact, it’s mostly the other way around, where the vaccinated are dying off quickly, and nobody is sure whether it’s from Covid, Delta, or the blood-clotting mRNA and protein-payload Covid vaccines.

Vaccine-promoting, globalist-psychopath Bill Gates apologizes for being friends with a child rapist

Bill Gates says his relationship with Jeffrey Epstein was a “huge mistake” as people are finding out he “hung out” with the ‘suicided’ child-rapist on a regular basis. Is there a painting of Bill Gates wearing a dress at Epstein’s pedo-island resort, like there is of “Slick Willy” Bill Clinton? Is that why the FBI raided the estate, to protect the perv-elites?

Melinda Gates divorced Bill Gates because of his relationship with Jeffrey Epstein, by the way. Why would she be so upset that he simply “knows” another billionaire? Could it be that Bill is guilty of something horrible, other than poisoning people around the globe with his toxic GMO food and vaccines?

Gates bragged to Anderson Cooper about his relationship with Jeffrey Epstein on CNN, the counterfeit news network, that he had “several dinners with him.” And what was for dessert, a “full-body massage” by a captured girl? Then Gates admitted after several more questions from Cooper that “it was a huge mistake to spend time with him…” and then Gates said there were “lots of others in that same situation.” What “situation” is that Bill, that Epstein now had leverage on you?

In this video, Bill Gates brags at a TED conference about killing billions of people using vaccines and abortions. Have a watch and listen for yourself:

Are humans being turned into walking lab rats infected and dying from GMOs?

Bioengineered salmon by AquaBounty is the first genetically mutated animal approved for human consumption. Are you eating it? Will those who eat it suffer from hormone imbalances, since the fish are unnaturally gene-code embedded to grow much faster and larger? The FDA regulates GMO animals as “drugs.” Do people need a  prescription to eat GM salmon? Are your children’s doctors shooting deadly, experimental and untested GMOs into your children’s veins? Will the new Covid vaccines create humans who experience trillions of blood clots constantly from the protein prions their cells are now instructed to create?

In this video, Bill “Eugenics” Gates tries to explain why is he buying a quarter-million acres of farmland in USA (Louisiana, Arkansas and Nebraska mainly), making him the #1 private farmland owner in the country. We find out much more about the hidden agenda of GM-salmon, and how they will be “released” into restaurants without anyone knowing, and soon.

Watch and listen to Bill Gates admit the insanity of the Covid vaccines, literally warning us that there’s something to be worried about with modern medicine, about side effects, like from the Covid jabs:

“We’re taking things that are genetically modified organisms, and we’re injecting them into little kid’s arms, we just SHOOT them right into the veins.”   — Bill Gates

Check out Pandemic.news for updates on these crimes against humanity and the upcoming “Delta” and Covid “booster-vaccine” Holocaust. Also, if you know someone who already got pricked with the blood-clotting Covid inoculations, and they’re suffering from lethargy, pain, clouded thinking or an inflamed heart, that’s called CoVax Syndrome, so tell them to report it to VAERS.