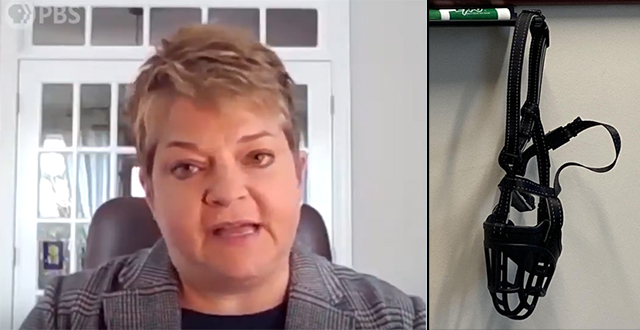 Tennessee’s former top vaccine official Dr Michelle Fiscus claimed last month that someone tried to intimidate her by mailing a muzzle to her house to “send a message.”

An investigation involving Homeland Security determined the muzzle was bought with her own credit card through an Amazon account in her name.

From Axios (HT: The Gateway Pundit):

A Tennessee investigation found evidence that the state’s fired vaccine chief, Michelle Fiscus, purchased a dog muzzle that she previously claimed someone had mailed in an attempt to intimidate her.

Details: The Tennessee Department of Safety & Homeland Security found through a subpoena that the Amazon package containing the muzzle traced back to a credit card in Fiscus’ name, according to an investigation report obtained by Axios.

– When asked by investigators, Fiscus provided information for an Amazon account in her name. It was a different account than the one used to purchase the muzzle.

– The investigation concluded that “the results of this investigation that purchases from both Amazon accounts were charged to the same American Express credit card in the name of Dr. Michelle D. Fiscus.”

– Fiscus told investigators she felt the muzzle was a threat and she should “stop talking about vaccinating people.” The investigation was launched after health department official Paul Peterson alerted the Department of Safety about the apparent threat to Fiscus.

Fiscus is now claiming someone stole her credit card and opened an Amazon account in her name in order to send her the intimidating muzzle.