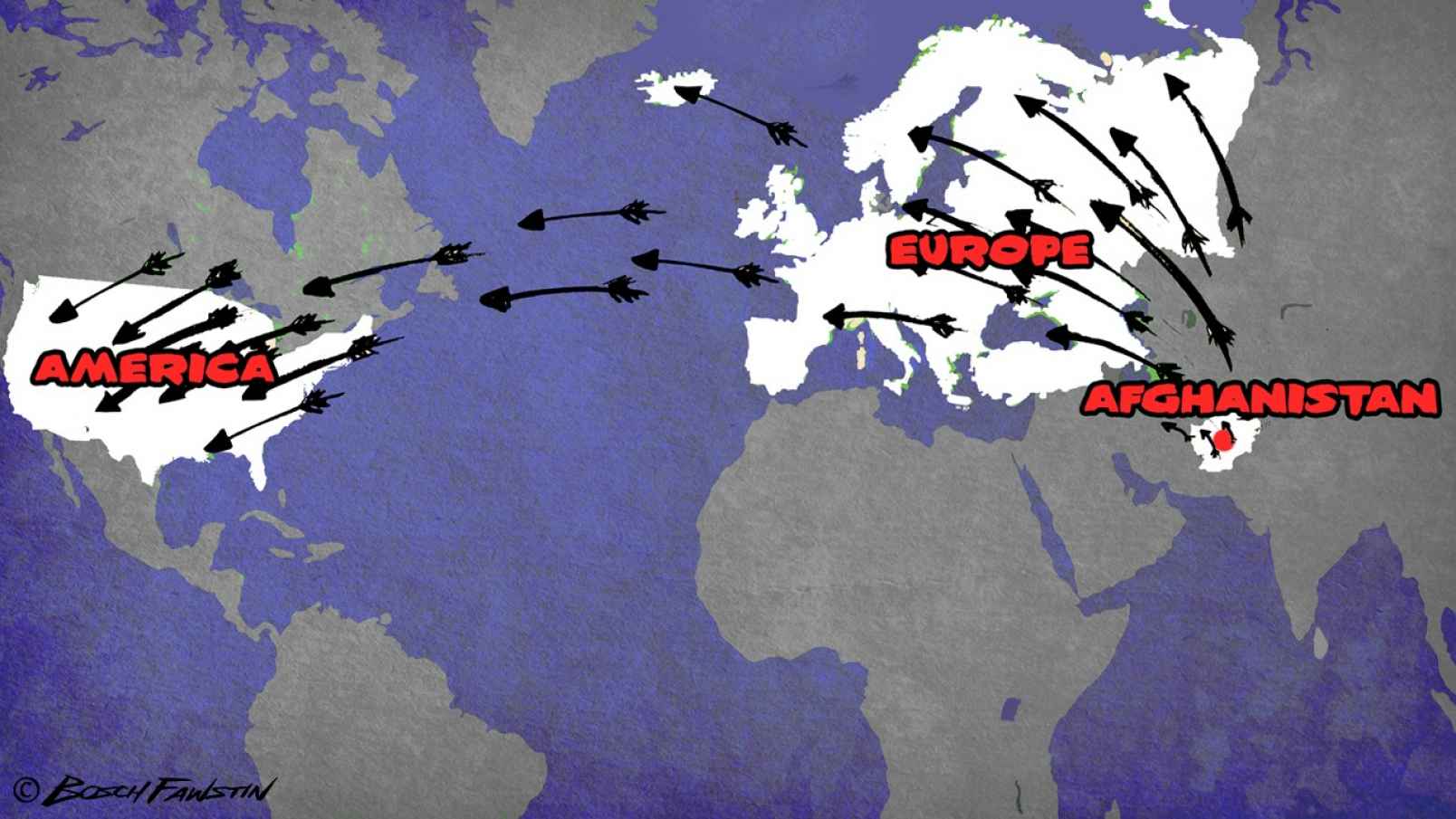 The UN High Commissioner for Refugees estimates that 30,000 Afghans a week are fleeing their country. However a report in The Guardian states that “30,000 Afghan citizens have left the country each day for the past 10 days”. That would approach a third of a million migrants.

While a small minority can be seen trying to board American aircraft at Kabul airport, the vast majority are moving on foot through Pakistan and Iran. The Shiite terror state is a particularly ideal gateway destination because it allows them easy access to Turkey and then to Europe.

And because Iran, unlike Pakistan, has done little to fortify its border with Afghanistan, Iranian authorities profit from Afghanistan’s lucrative drug trade and allowing Afghan migrants access to Europe undermines its enemies in the European Union under the guise of humanitarian aid.

About half a million of the UN’s refugees were added to the lists this year. That means the flow is just beginning and with as many as a third of a million already underway, it’s possible that Europe, America, and other western nations will see even more Afghan than Syrian migrants.

Neither Muslim country has been willing to permanently resettle its fellow Muslims. Especially since Pakistan backs the Taliban and Iran is looking to build closer relations with the Taliban.

Pakistan’s backing for the Taliban created two generations of refugee crises in Afghanistan, but is loudly demanding that western governments take them. The Islamic terror state which harbored Osama bin Laden has alternately proposed that the UN should fund refugee camps inside Afghanistan. UN refugee camps inside Afghanistan would only be able to operate with the sanction of the Taliban and would lead to the United States funding the terror group.

That is exactly what Pakistan, which is behind the Taliban, wants America and the UN to do.

The refugee crisis is a trojan horse of political opportunities for the Pakistani, Iranian, Turkish, and other Islamist allies of the Taliban to finance terrorists and undermine western nations.

Maintaining a humanitarian crisis in Afghanistan will lead to a flow of foreign aid to the Taliban.

Western nations, faced with the threat of millions of migrants showing up on their doorsteps, will be happy, after a few initial protests, to pay off the Taliban, overtly or covertly, to slow the flood. While the aid organizations swear up and down that none of the money is going to the Taliban, it is impossible to operate in a terror state without paying protection money to the terrorists.

Doing any kind of business in Afghanistan will mean doing business with the Taliban.

Turkey, the bridge between Muslim refugees and Europe, has openly used the migrant flow to blackmail the European Union. The new flood of migrants will give Erdogan, Turkey’s own Taliban leader, even more leverage against weak European leaders like Germany’s Merkel.

European countries may decide to preserve their legitimacy by using Turkey to covertly negotiate an arrangement with the Taliban that will slow the flow of Afghan refugees.

Such negotiations may very well be taking place right now.

570,000 Afghans have already applied for asylum in Europe over the past 5 years. While some of these asylum requests were rejected, the Taliban takeover means that the Afghans can no longer be deported. And they are now going to stay on in Europe: legally or illegally.

The same holds true for Afghans illegally in the United States.

Even assuming that the Taliban would take them, the United States is not going to deport Afghans back to Afghanistan. Any Afghan illegal aliens, past or present, who make their way to the United States are effectively here for good unless a non-Taliban government rises in Afghanistan. Or unless an America First administration wins an election in the United States, tears up past UN refugee agreements and finds a combination of countries willing to take them.

In the European Union, a bloc of six countries already overwhelmed with Afghan illegal migrants announced that they would maintain deportations.

The six countries, some conservative like Austria, others as pro-refugee as Germany, had little in common except that they were already drowning in migrants. But the rebellion against the EU’s immigration policy proved short-lived with Germany, the Netherlands, and Denmark all changing course. Only Austria is still trying to hold the line on deporting Afghan migrants.

What all of this means is that any Afghans (or migrants who claim to be Afghans) who reach America or Europe are undeportable. They will stay on and receive some quasi-legal status.

The Taliban’s takeover and the rapid evacuation of western diplomats and organizations will make it all but impossible to verify the identities of even legitimate claimants. Despite all the billions of dollars poured into Afghanistan over the years, much of the country remains rural and backward, and many residents, especially those outside the major cities, have little in the way of identity documents. Afghanistan’s turbulent history and change in administrations, combined with the large unofficial refugee populations in Pakistan and Iran, have created a competing assortment of different identity documents, many of which will be all but impossible to verify.

American or European immigration authorities won’t be able to screen out Islamic terrorists from refugees. Nor will they be able to do very much except ask some very rudimentary questions.

The United States currently hosts around 100,000 Afghans. The number of SIV visas for Afghans who worked for the United States in some capacity alone was estimated to eventually top 100,000 when accounting for family members. As the Taliban advanced, new lenient regulations were rolled out that put nearly every Afghan who worked for any American organization in just about any capacity eligible as a priority for refugee status in America.

The Afghans being transported out of Kabul airport to U.S. bases will move somewhere and it won’t be the Arab countries that are hosting those bases. They will most likely end up here. Plans are already underway to house them at bases in Texas and Wisconsin.

Before too long the Afghan population in this country could double practically overnight.

And then go on doubling for as long as the refugee flow continues and our border stays open.

Thousands of Afghans have already been transported to Virginia. It ought to go without saying that it is highly unlikely that any Afghans who make it into the United States will ever leave.

While it’s not unreasonable to feel sympathy for people, some of whom are legitimately fleeing domestic terror, many others are simply taking advantage of an opportunity. Afghanistan’s recent relative prosperity was fed by the billions of dollars that the United States, Europe, and other allied nations invested in its infrastructure, its economy, and its military. Some Afghans genuinely fear being tortured, murdered, or enslaved by the Taliban. Others don’t object to the Taliban, but are seeking economic opportunities that will no longer be available under them.

The opponents of the Taliban also fall into many categories. There are dedicated Islamists who reject the Taliban for a variety of theological, political, and tribal reasons. Afghan Shiites are wary of the Taliban, but their ties to Iran don’t make them friends of the United States.

Afghanistan contains a number of different ethnic, tribal, and religious groups who might oppose the Sunni Pashtuns of the Taliban without being any kind of fit for America or Europe. That is part of the reason why attempts to build any kind of democratic Afghanistan quickly fell apart.

Proponents of unlimited migration argue that we owe it to the Afghan people to take them in. But if there’s any debt there, it’s not from America to the Afghans, but the Afghans to Americans.

The United States, Europe, and other countries about to be saddled with a massive refugee surge spent countless billions and sacrificed the lives of their young men to build a country out of the rock and ruin of Afghanistan. They took bread out of the mouths of their own people and filled VA hospitals with the wounded, inside and outside, in a sacrifice that Afghans squandered.

The blame game over the fall of Afghanistan will go on for years, but the simple fact of the matter is that the majority of the Afghan military surrendered to the Taliban or ran away.

Any debt here is owed to us by the Afghans. We have paid our debts in blood and treasure.

The Afghan refugee crisis shows that the Taliban still have any number of ways that they can hurt us even once we have left Afghanistan. Their ability to turn the refugee tap on and off will allow not only the Jihadists, but their allies in Iran, Pakistan, and Turkey to blackmail us and our NATO allies by using Afghan refugees as a weapon. That’s a weapon we have to take away.

America is already staggering under the massive weight of illegal aliens arriving south of the border. We cannot accommodate the illegal aliens we have, let alone hundreds of thousands of people arriving from a stone age society whose values are fundamentally at odds with our own.

The Biden administration created the Afghan refugee crisis. It should not expect Americans in Texas, Wisconsin, Virginia, and anywhere else it’s plotting to dump its new wave of aliens, to shoulder the burden for a crisis that it created.