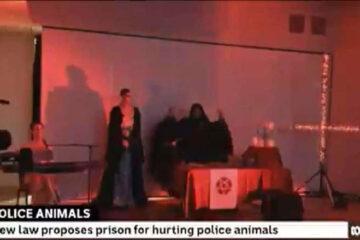 Though we may face tyrants and have to deal with them on a physical level in order to bring about justice, our real warfare is against the enemy of our souls, Satan, and his host of fallen angels. One of the most blatantly things I’ve seen in some time has come out of Australia, where the people were warned last year that the “New World Order” was in effect and now, we are seeing the demonic tyranny being addressed as millions of people rally against it.

However, during a news broadcast on ABC Australia, a brief shot of a satanic ritual, seemingly set up in their facilities, was aired and the anchor woman didn’t even blink at it, but just kept right on reading her teleprompter.

Of course, in posting the video, I referenced that it was ABC actually slipping up and airing their satanic “corporate meeting.” I mean it might as well be with the ungodliness they promote, right?

And no, no fact checkers even dared to try and debunk this as even major outlets like MSN reported:

The anchor Yvonne Yong was presenting a story about Queensland’s proposal to make killing of police horses or dogs a criminal offense. Her narrations get visually cut by a shot of three officers walking down.

A few seconds later her narration once again gets interrupted by a change of visuals. But this time, the network accidentally played a ritual of some people trying to summon Satan on the screen during the live telecast.

The producers quickly realised their mistake and immediately cut the feed, bringing the anchor back on the screen. She stayed silent for a few seconds and then jumped into another story.

Some people believe these people from the visual were members of the Noosa Temple of Satan that is also protesting against Queensland’s Education Department regarding religious instruction classes in schools.

The Noosa Temple of Satan also retweeted the clip with a caption, “Satan works in mysterious ways”.

Notice there is not a single explanation for why that clip was inserted.

As we have written previously, it appears that New South Wales in Australia has become the birthplace for the New World Order with massive tyranny taking place against the people.

Yet, as you can see from videos in the link below, the people are simply not going to go quietly into the night.

Australia: The People Are Out In Full Force & Agents Of The State Have Pulled Their Mask Off To Show Who They Really Are (Videos)

And the turnout at Bondi Beach over the weekend was absolutely incredible as the voice of the people thundered and overwhelmed the agents of the state there.