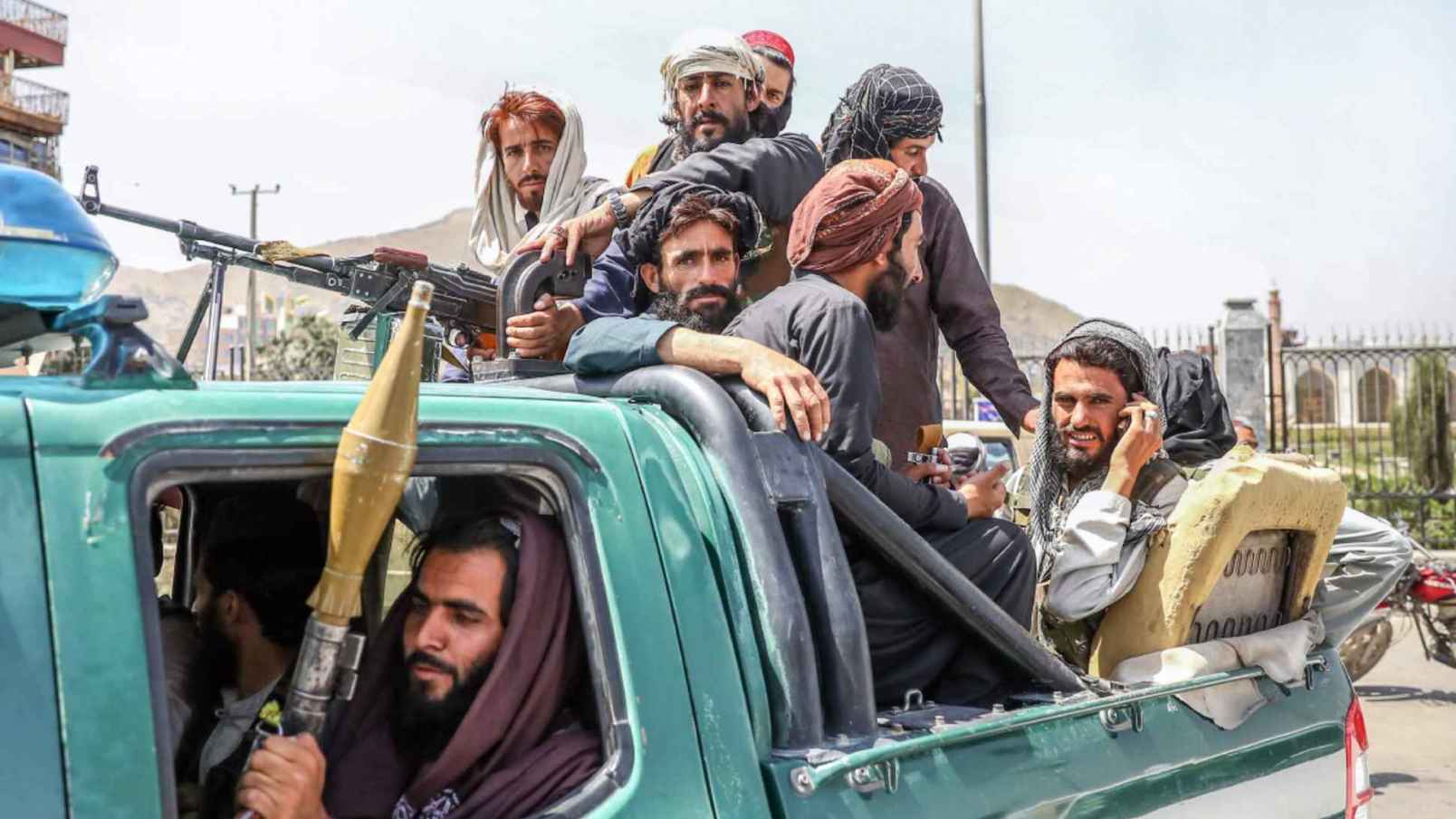 America was founded on that simple premise. The Declaration of Independence’s conviction in the equality of men, individual rights, and governments gaining their authority from the consent of the governed was based on “self-evident” truths.

The Taliban, like the vast majority of Muslims, assert that believers in Allah are superior to infidels, that men must have supreme authority over women, and leaders over people.

This hierarchical model governs a lot more of the world than anything we’ve come up with.

And even in America there are voices that favor tearing up the Declaration of Independence and the Constitution and reverting to a hierarchical model. From the Marxists on the Left to the Neo-Reactionaries on the Right, there are those who would turn back the clock to feudalism with enlightened philosopher-kings imposing an “ideal society” on the inferior class of men.

When we say that something is self-evident, it flows naturally from our values and our beliefs.

Consider the two radically different worldviews inherent in Benjamin Franklin writing that, “the rain which descends from heaven upon our vineyards” is “a constant proof that God loves us, and loves to see us happy” and the Ayatollah Khomeini proclaiming  “Allah did not create man so that he could have fun” and thus there “is no fun in Islam.”

Both Franklin and Khomeini were expressing a worldview that was self-evident to them.

“Life, Liberty, and the Pursuit of Happiness” came from people who believed that God loves us and wants us to enjoy life. Beheadings, butchery, and the burka came from Islamists who believe that Allah does not like us very much and that we deserve to be miserable.

The respective governments of America and the Muslim world just play out that theology.

America’s approach to individual freedom and meritocratic government came out of broader English and European intellectual trends. Western nations mostly came around to the approach, at least after two world wars, finding that happy people made for a good economy and stability.

Asian First World nations also came around to their own modified versions of a free society while still emphasizing hierarchy and collective morality. And those were the success stories.

Most of the rest of the world is littered with failures.

The American idea was exported successfully by contact with our culture which contained its individualistic, moral, and aspirational DNA. That’s much less true than it used to be. But what is still true is that our efforts to directly export our ideals have failed miserably. Whether it’s trying to explain the Founding Fathers to the Iraqis or funding Women’s Studies in Afghanistan, few were influenced, and many were confused, irritated, or moderately amused by our efforts.

Constructing “governments-in-a-box” in Iraq and Afghanistan was never going to fit their culture. Exporting human rights by explaining our self-evident belief in individual rights didn’t work in cultures that don’t think that people are primarily individuals with agency, but members of a group whose rights come from their role in a rigid hierarchy of ethnicity, gender or race.

Our own political and cultural elites have adopted that worldview making them particularly unfit to spread human rights or individual freedom abroad even as they eliminate them at home.

How can Biden, who decided to pick a black woman as his vice president, before deciding which individual was going to fill that role, credibly tell the Afghans or Iraqis that they shouldn’t pick their leaders based on their gender, tribe, ethnicity, or Sunni and Shiite status?

Before we explain freedom and rights to the Afghans and Iraqs, we need a refresher course.

Our democracy export business is based on a series of intellectual errors dating back to the two world wars which we had defined as fighting for democracy and against tyranny in Europe.

Ever since then our intellectual and cultural elites have stuck to the conviction that the entire world works much like Europe. Every country, whether it’s in Asia, Africa, or the Middle East, is in the midst of a struggle between liberal democrats and reactionary authoritarians. All we have to do is overthrow their Hitler or Mussolini, and a liberal democracy will emerge from the ashes.

This fallacy may have hit its peak with the insistence that the Arab Spring was Europe in 1848.

The rest of the world isn’t Europe of the past three centuries. Its intellectual trends, worldviews, and culture have little in common. While western lefties managed to export socialism to most of the world, it takes on very different forms in places like North Korea or Iraq. The “self-evident” assumptions of political ideas are lost in the translation and transition to very different cultures.

The problem with exporting our “self-evident” ideas is that they’re based on the belief in a loving and merciful God, on the value of individual life, and the genius of individual innovation. Most of the world’s cultures are not only not individualistic, many, like the People’s Republic of China or the Muslim world, are actively anti-individualistic and believe morality comes from hierarchy.

Is morality individual or is it collective? Is the role of government to free people to make moral choices or to force them to make the right choice? Where you come down on the answer to that issue is going to determine the sort of society and government you want and will fight for.

If you’re a member of the Taliban, of the Chinese Communist Party, a believer in critical race theory or the neo-reactionary ideology, odds are you will come down on the collective side.

And on the side of tyranny.

Is life basically good or bad? Are most people bad or good? Does God love us or hate us?

You can’t just casually export our underlying assumptions behind human rights to cultures that answer these questions in very different ways.

All of us, in a more tribal America, have experienced the frustration of mutually incomprehensible conversations with our fellow Americans that appear to be about issues, mask mandates, Black Lives Matter, or abortion, but that are actually about culture and values.

If it’s all but impossible to establish common ground on what rights and freedoms are with other Americans, what were the odds that we were going to do it with Afghans or Iraqis?

America can and should export human rights. But the best way to do it is by example.

Whether it’s parents influencing children, teachers acting as role models, or any other mentor relationship, the most vital lessons are not didactic, but personal. From our earliest years, we learn by imitation and we become like the people we want to be. Indeed, in both Judaism and Christianity, goodness comes from striving to learn from and imitate the ways of God.

Tellingly, the concept plays out very differently in Islam where Muslims imitiate Mohammed.

When nations and peoples around the world strived to be like America, it’s because they admired what we had, what we achieved, and how we lived. Most people assume that success is the result of values and behaviors. How people see a successful group, whether it’s Americans, Jews, or Asians comes down to the question of whether they achieved their success fairly through discipline and hard work, or unfairly by abuse and thievery. The answer to that question will determine whether someone is anti-American, anti-Semitic, or anti-whatever group.

These days the loudest voices stating that America is evil, and that everything we had was gained through colonialism and slavery, are coming from our own political and cultural elites.

Why would anyone admire or imitate us when we loudly announce that we’re liars and thieves?

Exporting human rights is not a matter of finding dictators to overthrow. The Muslim world isn’t Europe. It’s not in a state of conflict between tyranny and freedom, but between different flavors of tyranny which all share underlying assumptions about hierarchy over individualism.

There are times when America may need to intervene in other countries, when it’s to counter a threat or to prevent an extreme wrong such as genocide, but we cannot and will not fix the world. The vast majority of the planet will go on living under authoritarian regimes. Women in Muslim countries will suffer. And so will various ethnic and religious minorities under their rule.

We should condemn evil where we see it without assuming that we can make it go away and that should drive us to build alliances with nations that share our culture, heritage and values. Instead of spending billions reconstructing enemies, we’re better off strengthening our friends.

Above all else, we should show that our values lead to a good life. The example that we set for the rest of the world will do more to spread human rights than any military interventions.

That’s how it always was.

After a century of ideological cold wars, countering Communism and then Islamism, we have a lot of military interventions under our belt, but have gotten no better at making arguments for our way of life to our own people. While we were trying to convince Africans that Marxism wasn’t for them, our Ivy League institutions adopted it. And while we tried to talk the Afghans and Iraqis out of Islamic theocracy, our own cities, institutions, and governments filled up with Islamists.

If we want to defeat Islamism and protect human rights and freedom, we should start at home.

It’s not just Afghanistan where young girls are being enslaved or sexually abused by Islamists.

In 2019, I reported that there had been over 2,000 visas approved for underage ‘brides’ from Muslim countries. Two years before that I reported on a female genital mutilation network in Michigan. There have been multiple cases of slavery involving Muslim families in America.

The massive influx of Afghans into America will make those numbers worse, not better.

The fundamental lesson of our founding is that we can’t defend our rights without also defending our culture. The self-evident truths on which our freedoms were founded are no longer all that self-evident on a college campus, let alone in Islamist enclaves like Dearborn or Little Mogadishu. If we want to save our rights, we’ll have to defeat the Taliban at home.