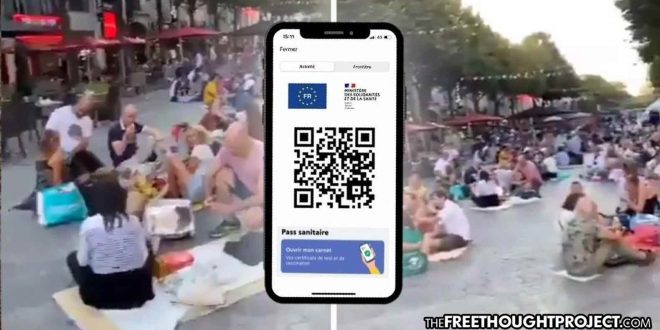 “The health pass will never be a right of access that discriminates among the French. It cannot be made compulsory for access to everyday places,” French President Emmanuel Macron pledged in April during an interview with the regional press. However, less than three months later and Macron conducted an about-face.

In July, in full totalitarian form, Macron mandated the “health pass” or (pass sanitaire) that is mandatory in order to gain access to leisure and cultural venues with more than 50 people, including cinemas and museums. From the beginning of August, it has been necessary to show your health pass to have coffee or eat lunch at a restaurant – even on an outdoor terrace – or to shop at a mall.

In order to have a coffee in France, citizens have to prove they’ve had the vaccine. According to the government’s draft bill, restaurants and businesses who refuse to comply will be fined up to €45,000 and proprietors face up to a year in prison.

This new push is the most restrictive COVID tyranny in all of Europe and it has already begun spreading to the West in places like New York City, parts of California, and New Orleans. Naturally, it has inspired much-deserved outrage.

Beginning with Macron’s announcement in July, thousands began protesting in Paris. They marched on government buildings and even took to vandalizing vaccine centers. More than 100,000 protesters took to the streets across the country over several weekends with some donning the famous “gilets jaunes” or “yellow vests.”

Unfortunately, unlike other protests in the past, the French government hasn’t given in to the demands of protesters. But in true French spirit, the protesters haven’t given up either.

According to the OP, the bars and restaurants are “nearly empty” as the crowded streets show the French unwilling to surrender their freedom for the façade of safety.

Hopefully, the US follows suit and the small group of folks currently resisting in New York grows to a massive force for freedom and the right to informed consent.

As TFTP reported last week, a small group of New Yorkers is carrying out similar resistance to the vaccine passport. A group of business owners have gone on the offensive against the government’s “arbitrary” and “unscientific” vaccine mandate, and have filed a lawsuit.

Pasticceria Rocco’s owner, Mary Josephine Generoso — who is also part of the lawsuit — has been outspoken against the mandate and has even put a sign up in front of her business proudly proclaiming that they will not comply and will not discriminate against anyone, vaccinated or not.

Also, according to reports on the ground, many businesses have already decided that they will not comply with the mandate and movie theaters, restaurants and other venues  have refused to check their customers’ vaccination status before allowing them to enter. There has been no news yet of these businesses refusing to be fined.

This is the kind of resistance that is necessary to stop the world’s rapid decline into tyranny. If we do not stand up to it and refuse to obey, rest assured, this decline — which is already at warp speed — will happen even faster and before we know it, there will be no rights left to take.