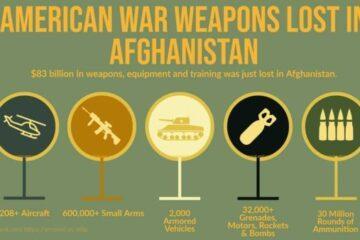 Frankly, we should be used to how criminals in our government work by now. This is the new, open and easy way to traffick arms to our enemies. Remember Iraq and immediately after we pulled out, the Iraqis ran and turned over millions of dollars in arms and Humvees? Same thing is going on in Afghanistan. However, the People of the united States are paying for it while criminals like China Joe Biden, an illegitimate man in the People’s White House, profits and so do those America’s enemies who prop him up.

So, to see what the People of the united States paid for that the sniffer-in-chief just handed over to our sworn enemies, I thought I would provide you with a full list, and even that may not be complete.

Guns In The News reports:

Aside from the fact that the Biden Administration pulled our military out while leaving unarmed and defenseless American Citizens behind, the enormous list of weapons and true military hardware that was gift-wrapped and handed to the Taliban is of great concern. The list of military equipment left behind in Afghanistan as a result of this haphazard military evacuation is extensive and includes the following:

This is the information you are not supposed to have. According to Forbes, the Biden Administration is not helping transparency by “hiding key audits on Afghan military equipment.”

New data reveals just how much danger the Biden Administration has put American Citizens in. In an effort to save face, Pentagon Press Secretary, John Kirby, said some equipment was destroyed. However, new photos of Taliban fighters using American weaponry is surfacing every day. It is unclear exactly how many weapons have fallen into the hands of the Taliban, but according to the Hill, even the Biden Administration has acknowledged it’s a “fair amount.”

While this administration and its supporters are doing their worst to try and disarm the People of the united States, they are complicit in treason against the united States by turning over such a large cache of weapons.

Yes, friends, the Biden administration is nothing more than the organized crime syndicate of Washington, DC, and it seems to me the States need to rise up and put a stop to it by impeachment, removal and prosecution and begin secession and pull away from this beast we’ve created (Revelation 18:4)