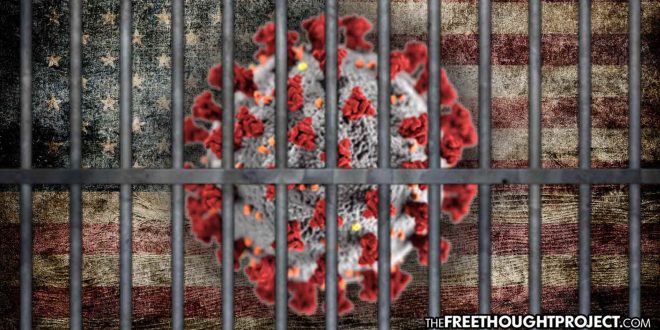 On March 16, 2020, the Trump administration released a 15-day plan to slow the spread of the coronavirus in the US. That was 528 days ago.

Over the last year and a half, one of the largest power grabs in the history of the world has taken place as fearful citizens willingly surrendered their rights to the state for the promise of safety. But that safety never came and it never will.

What did come, however, was a slew of arbitrary and often ridiculous mandates and decrees from politicians who think that government force can stop a pandemic. Despite the economically devastating draconian lockdowns that killed countless small businesses, vaccine passports, and mask mandates, COVID-19 returned.

As TFTP has reported, we predicted this. Several studies have shown that the lockdowns were not effective at stopping the virus. In June, we reported on the study from the National Bureau of Economic Research which analyzed data from 44 countries and all 50 states. The study from the NBER found that these restrictions not only failed to save lives, and greatly exacerbated the destruction of the working class — but have in fact resulted in an increase of excess mortality. At the end of the day, they cost more lives than they saved.

Also in June, TFTP covered the findings of an MIT scientist who reported a data analysis of the economic impact of the lockdown — noting that whilst it played a key contributing role to the sharp rise of unemployment, it did not make a significant reduction in deaths.

And on June 22, a Harvard University study reiterated the fact that while this policy did not save lives it decimated the economy; while modern robber barons such as Zuckerberg, Gates, and Bezos saw their portfolios expand exponentially. This was yet another report, as TFTP’s Don Via Jr. pointed out, that much like the aforementioned, did not receive national headlines from the corporate media.

On top of the sheer despotism brought about by team lockdown, government spending has reached historical levels and the already-unsustainable nature of such irresponsible fiscal policy has been fast tracked to complete meltdown. As the government prints more money, your savings is devalued, forcing more and more people to lean on the already stressed system. It is a recipe for disaster and the ones who have been paying attention know it.

What’s the tyrant class planning next? Well, more of the same it seems.

To be clear, no one here is claiming that COVID-19 is not serious and you shouldn’t take precautions. However, granting government tyrannical powers in the form of business closures, mandates, vaccine passports, and more lockdowns, is most assuredly not the answer.

As John Locke famously stated in A Letter Concerning Toleration, “It is one thing to persuade, another to command; one thing to press with arguments, another with penalties. This the civil power alone has a right to do; to the other good-will is authority enough.”

In summary, good ideas do not require force.

What’s more, as the data analyses above illustrate, it is difficult to tell the difference between places which had strict lockdowns and mandates verses the ones that did not. You can’t tyranny your way out of a pandemic — but you can pandemic your way into tyranny.

Sadly, Americans have a short memory when it comes to giving up their freedoms for a false sense of security. When a society surrenders individual liberty to the state, the state never gives it back.

Case in point: 9/11. After the tragic attacks on September 11, 2001, the U.S. government declared a state of emergency. That order granted the Office of the President broad discretionary powers over the military, powers that the President normally does not have. It also gives the Executive far more power than it should have which allowed for the creation of the massive surveillance state we see today.

Since that September day, we’ve entered into multiple wars of aggression while bypassing Congress, waged a massive domestic spying campaign, eroded the Bill of Rights, and constructed a monumental police state hear at home.

Because Americans have such short memories, we are once again yielding our freedom for the perception of safety. And, just like the government has done since 9/11, they will hold on to those freedoms and refuse to give them back.

Now, as the bogus and freedom-diminishing war on terror comes crumbling down, the tyrant class needs a new war to keep you in line and ready and willing to relinquish your rights. The targeted “terrorists” are no longer brown people in the Middle East, the new enemies are those who refuse to give up their rights at home.

This is why the Department of Homeland Security — which coincidentally did not exist before 9/11 — issued a terror bulletin this month, claiming that anti-lockdown protesters could be potential terrorists.

Now is not the time to sit idle and hope for things to get better. As Rand Paul said earlier this month, “we are at a moment of truth and a crossroads. Will we allow these people to use fear and propaganda to do further harm to our society, economy, and children? Or will we stand together and say, absolutely not. Not this time. I choose freedom.”

The definition of freedom is not safety. Freedom comes with risks and it is up to us to assess those risks and make our own choices. Governments cannot eliminate risk and only tyrants claim to be able to do so as it gives them complete control over your life.

Will you be one who chooses freedom and assess your own safety, or, will you continue to believe in the totalitarian fantasy that is the government creating a world without risk? The choice is yours.