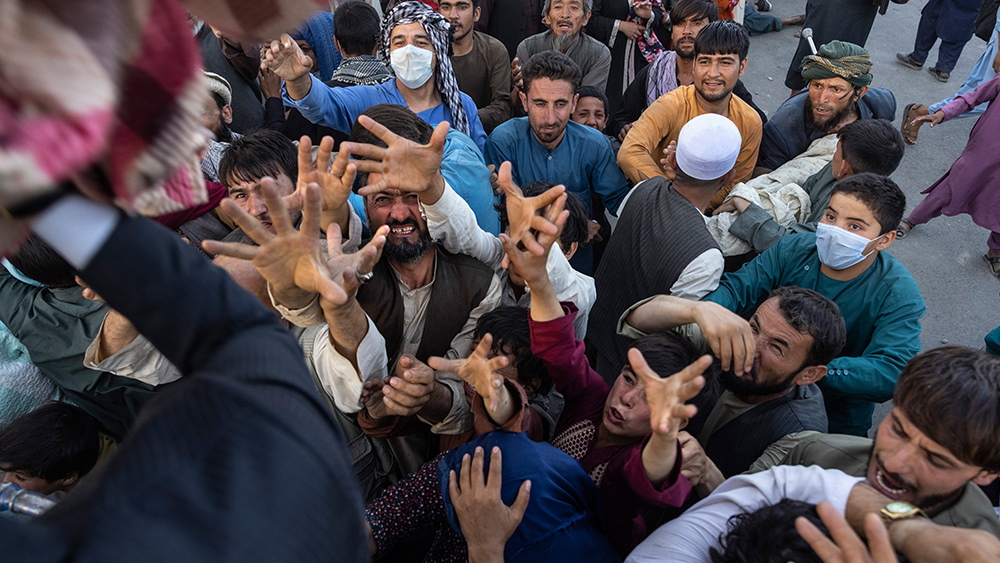 (Natural News) While American citizens stuck in Afghanistan had been required to fill out an online form to be evacuated, a report informs that massive numbers of Afghans are being flown out of Kabul without any proof of identification whatsoever. At least 100 of these refugees are on terror watch lists, and one evacuated man apparently works directly for the brutal Islamic State, infamous for burning people alive and drowning them in cages.

In fact, of the 100,000 people evacuated thus far from Afghanistan, only 5,000 have been American citizens. How many of the other 95,000 will commit terrorist acts in the West? Time will tell — even if our government won’t.

Telling us about the story Friday night was Fox News host Tucker Carlson. He mentioned that after the abrupt closure of the massive Bagram Airfield — an outrageous act that led to the killing of 13 servicemen on Thursday — evacuation of Americans and allies from Afghanistan had to be staged from the virtually undefendable commercial airport in the country’s capital, Kabul.

Carlson then pointed out that the same officials responsible for this debacle are now “overseeing what may be the largest airlift in generations, an airlift of thousands of Afghan citizens into the West and into our country.” But who are these people?

Addressing this, the commentator stated:

The truth is, despite what they are telling you, we have no real idea who they are…. We just learned for example that at least a hundred of the refugees the American military has flown out of Kabul, people we’ve been told repeatedly are heroes by definition are in fact on terror watch lists.

One man we evacuated apparently works directly for ISIS. Today, an Afghan interpreter told FOX News that this sort of thing is happening all the time. People are getting on planes in Kabul without any proof of identification whatsoever. It’s like voting in California. Listen.

“I know people that they’re at the same situation that I am right now,” the interpreter could then be heard saying in an audio clip. “They have worked for the United States. They have provided supply for the United States, but guess what? There are people that are getting inside the airport that they have never worked. They knew somebody with a green card [or] they know somebody with a passport; that’s how they got inside.”

“I know people that they are inside, but they never worked,” he continued.

Unfortunately, this is an example of how “we learn from history that we learn nothing from history,” to paraphrase philosopher Georg Hegel. That is, the above is reminiscent of how, addressing the wave Islamic migration into Europe in a 2015 interview, practicing Muslim Dr. Mudar Zahran stated that it also served as a Trojan horse for jihadists. “I can authoritatively confirm — I have photos, I have images, I have pictures, I have names of terrorists who actually are already in Europe posting their photos in Europe on Facebook,” he warned.

Yet if this isn’t enough to make a patriot’s blood boil, note what else Carlson tells us about the evacuation:

One pilot with United Airlines, someone who is flying people out of Kabul as part of the Civilian Reserve Airlift Fleet, just told FOX News [that] he was simply told to evacuate people from Afghanistan. No details beyond that. The pilot said he was never given a passenger manifest and when his airplane arrived at Dulles Airport outside Washington, the State Department refused to share any passenger information with Customs and Border Patrol. They just whisked right on through.

That means, as always, unnamed foreign nationals got far better treatment than you would get if you landed at Dulles Airport. Surprised? But again, there’s a lot of this.

Another commercial airline employee, a flight attendant, just told this show that her flight crew was told they’d be ferrying American civilians who would escape from Kabul, and she was happy to do that. But when they arrived in Qatar in the Gulf they learned that, in fact, they’d be carrying no American citizens at all — none. Instead, they’d have to transport Afghan nationals, many of whom became unruly on the flight [future model citizens?].

And by the way, since these weren’t American citizens, they didn’t have to wear masks. Rules like that are only for you and the rest of us who are paying for it. They don’t apply to people without passports from Afghanistan.

Now, that may shock you, but trust us, it’s normal in Washington.

The far more, too, in Carlson’s video (below).

The immigrationist pseudo-elite, however, are all in on this massive unknown-quantity migration. One of them, Congressman Adam Kinzinger (R-Il.), not only essentially said that its opponents may be racist (even though Afghans are Caucasian), but that if you oppose it, you may be “evil at your heart.”

The politician also complained of “fear-mongering,” citing as an example the warning that “they are coming to your neighborhood, these hordes of people that haven’t been vetted.”

Of course, they’re not likely coming to Kinzinger’s neighborhood; often unassimilable migrants are never shipped to the pseudo-elites’ cherished enclaves, places such as Martha’s Vineyard. Blue-collar neighborhoods are blessed with that diversity.

Moreover, these migrants often can’t be vetted. Note that countries such as Afghanistan, Syria, and Sudan simply don’t have comprehensive Western-style databases providing accurate information on citizens. Yet it wouldn’t matter if they did because in such places, you can likely pay a bribe and get official government documents saying you’re whoever you want to be. Why, even birth certificates are rarely issued in Afghanistan.

Aside from this, something else the immigrationist propagandists never address (partially because conservatives are too “conservative” to ask it) is a simple question I posed Wednesday: Why aren’t wealthy, sparely populated Muslim countries — e.g., Saudi Arabia — taking the Afghan refugees, their co-religionists?

Part of the answer is that migrants settled in Muslim nations can’t become naturalized in our country and then vote Democrat. And leftists aren’t going to pressure Islamic lands into taking their future voters.