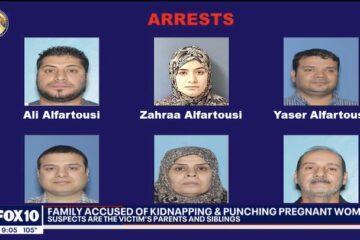 Amid all the discussion about the resettlement of Afghan refugees in the United States, few are focusing on the question of the compatibility of their societal mores with American culture. At this late date, we all know that such inquiries are “Islamophobic.” However, a recent incident in Arizona suggests some of the difficulties that could arise among the new arrivals. Fox 10 Phoenix reported Saturday that “police arrested six members of a Phoenix-area family they say targeted a 20-year-old relative and tried to kidnap her because they disapprove of her boyfriend, who doesn’t share their Muslim faith.” This family is Iraqi, but the Afghan refugees share the same religion, and many have the same ideas about women, marriage, and the permissibility of honor killing.

Fox reported that “the woman, who is 20 weeks pregnant, told police she was afraid her relatives will kill her because they believe she has brought dishonor to the family.” Arizona police “believe the family wanted to send the victim back to Iraq,” where she would face almost certain death. Court records “describe accusations of threats and assaults, most recently at a medical building in Avondale last week. Police said the relatives took the woman’s cell phone and purse, along with her boyfriend’s gun, during a ‘violent assault.’ The woman grabbed onto a responding officer, pleading ‘please, don’t let them take me.’”

This woman’s father, mother, three brothers and her sister, who are all “described as traditional Muslims,” were arrested. The entire family has “a history of harassment against the victim because of her relationship with a boyfriend, who is described as being of another religious faith.” Islamic law forbids Muslim women to marry non-Muslim men, although Muslim men may marry Jewish or Christian women; the idea is that the Islamic community is always growing at the expense of non-Muslim communities. For appearing to be on the path toward breaking this rule, the woman says that her family members tried to kill both her and her boyfriend.

The woman and her boyfriend moved away from the Phoenix area, but then the threatening phone calls began. One brother left this message: “This is Ali, her brother. If you don’t bring my sister back, I’m going to kidnap your sister. I’m not scared of your American laws.” Ali was relentless, declaring that “he would still find the victim even of he was in prison, and the victim was 80 years old.” It is not surprising in light of all this that the woman told police that she was afraid she was going to be killed because she had “dishonored the family.”

This is a scenario similar to others that have played out for all too many Muslim women all over the world, including previously in the United States: The woman in this case even told police she was afraid she would “end up like Noor,” referring to Noor Almaleki, another Muslim woman in Arizona, who was murdered by her father in 2011 for honor.

Unfortunately, such behavior has a basis in Islamic culture and practice that is all too solid. In the Qur’an, a mysterious figure, known as Khidr in Islamic tradition, kills a boy in an apparently random and gratuitous attack. He then explains: “And as for the boy, his parents were believers, and we feared that he would overburden them by transgression and disbelief. So we intended that their Lord should substitute for them one better than him in purity and nearer to mercy.” (18:80-81)

According to Islamic law, “retaliation is obligatory against anyone who kills a human being purely intentionally and without right.” However, “not subject to retaliation” is “a father or mother (or their fathers or mothers) for killing their offspring, or offspring’s offspring.” (Reliance of the Traveller o1.1-2).

TRENDING:  70% Of Americans Are Angry At The Political Establishment

These teachings have an effect: In many Muslim-majority areas, honor killing is taken for granted as an understandable and forgivable offense. Muslims commit 91 percent of honor killings worldwide. The Palestinian Authority gives pardons or suspended sentences for honor murders. Iraqi women have asked for tougher sentences for Islamic honor murderers, who get off lightly now. Syria in 2009 scrapped a law limiting the length of sentences for honor killings, but “the new law says a man can still benefit from extenuating circumstances in crimes of passion or honour ‘provided he serves a prison term of no less than two years in the case of killing.’” And in 2003 the Jordanian Parliament voted down on Islamic grounds a provision designed to stiffen penalties for honor killings. Al-Jazeera reported that “Islamists and conservatives said the laws violated religious traditions and would destroy families and values.” In Iran, according to the New York Times, the legal system “treats parents who murder their children with relative leniency, as the maximum sentence for the crime is only ten years.”

Now this practice has come to Arizona. Will some of the newly arrived Afghan refugees bring more of it to the United States? We shall see; we have no choice.