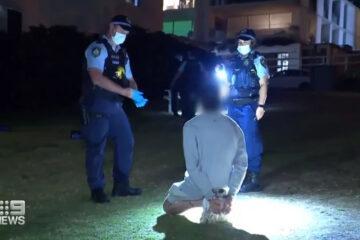 We’ve covered quite a bit of the tyranny taking place Down Under in Australia. In fact, in this past week, The Sons of Liberty morning show interviewed both Fanos Panayides and Nick Patterson about their encounters. We’ve also see Australian truckers win a major victory against mandatory COVID shots. Still the New World Order Gestapo that this plandemic has birthed demonstrates how much of a miserable failure that tyranny actually is when it’s allowed to flourish.

Jon Miltimore has the story at Foundation for Economic Education.

The images from Australia’s lockdown are terrifying, and many people are awakening to the moral horror that is engulfing the Land Down Under.

On Monday New Zealand Prime Minister Jacinda Ardern announced the government would be extending its lockdown following an outbreak of the Delta variant.

“We don’t yet believe that we have reached the peak of this outbreak, or necessarily the edge of it,” Ardern said at a news conference in the capital Wellington.

Meanwhile, in nearby Australia, residents are entering the ninth week of a lockdown that had initially been scheduled for two weeks. In many of the hardest-hit parts of the city, NBC reports, military personnel roam the streets and authorities issue fines of up to $3,700 to individuals breaking lockdown orders.

The policy has resulted in violent clashes between police and lockdown protesters, but public health officials have defended the policy, which is expected to last at least through September.

“What this is about is buying us time,” said Kerry Chant, the chief health officer in New South Wales state.

The decision by New Zealand and Australia to lockdown—and stay in lockdown as the virus spreads—fits a familiar pattern.

In 2020, numerous governments around the world went into lockdown to attempt to mitigate the spread of COVID-19. In the United States, public health officials created a “15 days to slow the spread” campaign—which quickly devolved, in many places, into indefinite closures of all economic sectors deemed “non-essential.”

The results of lockdowns were catastrophic—millions of job losses, millions of businesses destroyed, surging drug overdoses, increased youth suicide and depression, and a massive decrease in cancer screenings, among them. Globally, as many as 150 million people are expected to slip into extreme poverty, according to the World Bank.

“The harm to people is catastrophic,” said Bhattacharya.

The harms would be bad enough, but an abundance of evidence also suggests the lockdowns were ineffective at containing the virus. Nearly three dozen academic studies have been published suggesting that lockdowns do little to slow the spread of the virus.

Following the outbreak last year, modelers warned that Sweden would incur “at least 96,000 deaths … by 1 July without mitigation.” To date, fewer than 15,000 Swedes have died with coronavirus, and Sweden saw a lower death spike than most of Europe. Moreover, neighbors such as Norway and Finland, who had policies similar to Sweden, had among the lowest COVID mortality rates in Europe.

“[Lockdowns] have not served to control the epidemic in the places where they have been most vigorously imposed,” Bhattacharya told Newsweek earlier this year.

Unfortunately, the current lockdowns in Australia and New Zealand are proving no more effective at slowing the virus than the lockdowns of 2020—despite the hardline approach of their governments.

The 3-day moving average for cases is nearly 1,000 in Australia—nearly double its peak in 2020. In New Zealand, meanwhile, cases have quickly surged to more than 60 per day—despite the fact that New Zealand went into lockdown after learning of a single case of COVID.

One reason lockdowns struggle to contain the virus is that research shows that stay-at-home orders may actually be counterproductive.

“Micro evidence contradicts the public-health ideal in which households would be places of solitary confinement and zero transmission,” University of Chicago economist Casey B. Mulligan noted in a National Bureau of Economic Research Paper published in April. “Instead, the evidence suggests that ‘households show the highest transmission rates’ and that ‘households are high-risk settings for the transmission of [COVID-19].’”

TRENDING:  The Tragedy of Harvey and The Need for Constitutional Prayer

Economists at the RAND Corporation and the University Southern California reached a similar conclusion regarding the ineffectiveness of “shelter-in-place” orders months later.

A Police State By Any Other Name

Sadly, governments are compounding the tragedy of the pandemic with lockdown policies. Citizens are not just forced to deal with just a deadly pandemic; they are also forced to contend with police states that are growing increasingly aggressive and brutal.

In Australia, rescue dogs recently were shot dead to prevent charity workers from picking them up—because it would require travel. The state is also using “health hotels” to involuntarily confine COVID-positve citizens, while multiple quarantine facilities are being constructed, including a facility in Queensland that will house up to 1,000 people.

Australians who have declined to submit themselves to state confinement have found themselves on the run. Police also are allegedly monitoring fitness trackers to make sure individuals are not traveling beyond the boundaries established by the state.

Australians who’ve gathered to resist these measures have been violently suppressed by police, who have shown no hesitation to use rubber bullets and pepper spray against them. This week video emerged of a child crying in agony after being hit in the face with pepper spray by police during a freedom rally.

“I can’t see,” the boy cries as rally attendees try to wash the chemicals from his eyes with water.

The images are terrifying, and many people are beginning to awaken to the moral horror that is engulfing the Land Down Under.

“Australians (and perhaps all in the west): are you being asked to choose between the dangers of a police state vs the dangers of Covid?” author Jordan B. Peterson tweeted Thursday. “I would certainly prefer the relatively low risk of the latter to the increasingly unpleasant certainty of the former.”

Needless to say, these results are not what Australian lawmakers intended when they went into lockdown. They no doubt had hoped to contain or at least slow the spread of the virus; that’s not happening. Their police state, they would contend, was designed to keep people safe, not create tyranny. But that’s exactly what it is doing.

And this potential for tyranny is pregnant in lockdowns everywhere.

“Once a government is committed to the principle of silencing the voice of opposition, it has only one way to go,” US President Harry S. Truman once observed, “and that is down the path of increasingly repressive measures, until it becomes a source of terror to all its citizens and creates a country where everyone lives in fear.”

Terror is what Australia’s government has become. Let’s pray that New Zealand and indeed the rest of the world finally recognize the true face of lockdowns.

TRENDING:  A Vet Wants To Save Another Vet’s Life By Donating An Organ – Who Is Standing In The Way?

That’s exactly what occurs when men do not obey the commands of God (Leviticus 26:16). Fortunately, the people of Australia are waking up to that reality. Let’s hope it is not too late!