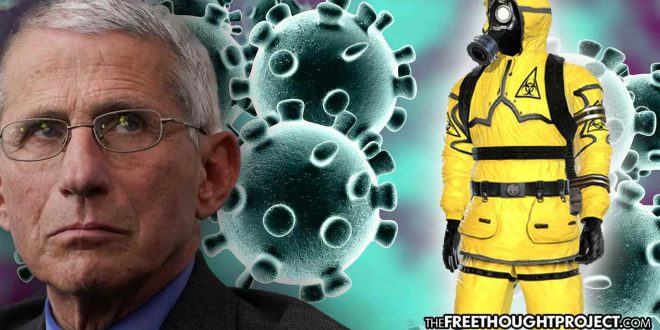 (ZH) — When Dr. Anthony Fauci confidently screamed at Sen. Rand Paul (R-KY) in July – calling him a liar for accusing him of funding so-called “Gain-of-Function” (GoF) research in Wuhan, China to make coronaviruses more transmissible to humans, the argument ultimately faded due to Fauci’s unsupported claim that the research didn’t technically fit the definition of GoF.

Now, thanks to materials (here and here) released through a Freedom of Information Act lawsuit by The Intercept against the National Institutes of Health (which were unredacted enough to toss Fauci under the bus), we now know that Fauci-funded EcoHealth Alliance, a New York-based nonprofit headed by Peter Daszak, was absolutely engaged in gain-of-function research to make chimeric SARS-based coronaviruses, which they confirmed could infect human cells.

While evidence of this research has been pointed to in published studies, the FOIA release provides a key piece to the puzzle which sheds new light on what was going on.

“This is a roadmap to the high-risk research that could have led to the current pandemic,” said Gary Ruskin, executive director of U.S. Right To Know, a group that has been investigating the origins of Covid-19 (via The Intercept).

And as Rutgers University Board of Governors Chemistry Professor Richard H. Ebright notes, “The documents make it clear that assertions by the NIH Director, Francis Collins, and the NIAID Director, Anthony Fauci, that the NIH did not support gain-of-function research or potential pandemic pathogen enhancement at WIV are untruthful.”

In short, Fauci lied to Congress when he denied funding Gain-of-Function (GoF) research.

“The trove of documents includes two previously unpublished grant proposals that were funded by the NIAID, as well as project updates relating to the EcoHealth Alliance’s research, which has been scrutinized amid increased interest in the origins of the pandemic.”

The materials confirm the grants supported the construction–in Wuhan–of novel chimeric SARS-related coronaviruses that combined a spike gene from one coronavirus with genetic information from another coronavirus, and confirmed the resulting viruses could infect human cells.

The materials further reveal for the first time that one of the resulting novel, laboratory-generated SARS-related coronaviruses–one not been previously disclosed publicly–was more pathogenic to humanized mice than the starting virus from which it was constructed…

The documents make it clear that assertions by the NIH Director, Francis Collins, and the NIAID Director, Anthony Fauci, that the NIH did not support gain-of-function research or potential pandemic pathogen enhancement at WIV are untruthful.

When asked in the replies where to find specific evidence on GoF research, user @SnupSnus replied:

Alina Chan, a molecular biologist at the Broad Institute, said the documents show that the EcoHealth Alliance has reason to take the lab leak theory seriously. “In this proposal, they actually point out that they know how risky this work is. They keep talking about people potentially getting bitten — and they kept records of everyone who got bitten,” Chan said. “Does EcoHealth have those records? And if not, how can they possibly rule out a research-related accident?” -The Intercept

In response to inquiries from The Intercept, EcoHealth communications manager Robert Kessler replied: “We applied for grants to conduct research. The relevant agencies deemed that to be important research, and thus funded it. So I don’t know that there’s a whole lot to say.”

Stay tuned, things should get really interesting for Fauci and Daszak in the near future.

To review the history of EcoHealth, Fauci and Gain-of-Function research which we noted in March:

In 2014, Peter Daszak, president of New York-based nonprofit EcoHealth Alliance, received a grant from Dr. Anthony Fauci’s National Institutes of Health (NIH) to work with the Wuhan Institute of Virology (WIV) and others to research how bat coronaviruses can ‘evolve and jump into the human population.’

The grant’s initial funding of $666,442 began in June 2014 with an end date of May 2019, and had paid annually to the tune of $3.7 million under the “Understanding The Risk Of Bat Coronavirus Emergence” project. Notably, the Obama administration cut funding for “gain-of-function” research in October, 2014, four months after Daszak’s contract began, while the Wuhan Institute of Virology “had openly participated in gain-of-function research in partnership with U.S. universities and institutions” for years under the leadership of Dr. Shi ‘Batwoman’ Zhengli, according to the Washington Post‘s Josh Rogin.

One of the grants, titled “Understanding the Risk of Bat Coronavirus Emergence,” outlines an ambitious effort led by EcoHealth Alliance president Peter Daszak to screen thousands of bat samples for novel coronaviruses. The research also involved screening people who work with live animals. The documents contain several critical details about the research in Wuhan, including the fact that key experimental work with humanized mice was conducted at a biosafety level 3 lab at Wuhan University Center for Animal Experiment — and not at the Wuhan Institute of Virology, as was previously assumed. The documents raise additional questions about the theory that the pandemic may have begun in a lab accident, an idea that Daszak has called “heinous.”

The grant was initially awarded for a five-year period — from 2014 to 2019. Funding was renewed in 2019 but suspended by the Trump administration in April 2020. -The Intercept

After Rogin exposed diplomatic cables last April expressing grave concerns over safety at WIV, he says: “many of the scientists who spoke out to defend the lab were Shi’s research partners and funders, like the head of the global public health nonprofit EcoHealth Alliance, Peter Daszak; their research was tied to hers, and if the Wuhan lab were implicated in the pandemic, they would have to answer a lot of tough questions.”

In short, Daszak – who has insisted the ‘lab escape’ theory is impossible, and that random natural origin via intermediary animal species is the only answer – has a massive conflict of interest.