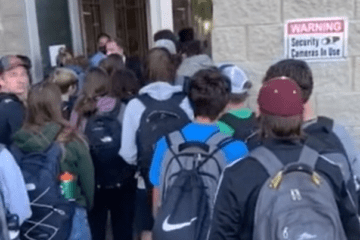 This is what resisting tyranny and defying unlawful mandates, policies and crimes against the people looks like! I hope the parents are just as stringent on what their kids are being subjected too in the public indoctrination centers we call public school, but if there is a lesson learned at a Manchester, Michigan high school it is to defy tyrants! And the parents were teaching their kids just that and it is glorious!

These parents and students were not asking for permission to defy the tyrants. They just defied! Take a look.

The students entered the building on Sept. 7, which was the day the health department’s mask mandate for all schools in the county went into effect.

Located in the southwestern corner of Washtenaw County with an enrollment of about 800 students, Manchester Community Schools had been the only district in the county that made wearing masks optional prior to the health department’s mandate.

While students and parents voiced their displeasure with school officials outside the building Tuesday, Manchester Superintendent Brad Bezeau said the students without mask were allowed to enter the building.

The unmasked students, however, were not allowed into any classrooms and were sent into a separate, isolated part of the building where they completed work for the day.

“It did get vocal and students did begin pressing against the door for entry without masks, obviously not being compliant,” Bezeau said. “I wouldn’t want to block students or anything like that, so that’s certainly how they got past us, but we were doing our due diligence and making sure that they understood that entering the building without a mask isn’t in compliance.”

The district coordinated with the Washtenaw County Sheriff’s Office to ensure compliance of the order, Bezeau said.

After the incident, Bezeau sent out communications to district families reminding them their children needed to comply with the health department’s order and that they were not allowed in school buildings without a mask.

Not following the mask mandate is a violation of district’s code of conduct and is an act of insubordination, Bezeau said. Students violating the code of conduct were disciplined, he said, but the incident was “more of an educational piece” in making sure they understood their behavior had to change while stopping short of a suspension or expulsion.

There were no issues with students entering school buildings without masks on Wednesday, Sept. 8, Bezeau said.

“I hope that folks are understanding the gravity of the seriousness of this – that we want to make sure that everyone’s safe,” Bezeau said. “You certainly can voice your opinion, but in the end we have to do what’s mandated of us.”

Hey Bezeau, I thought they just did voice their opinion by defying the unlawful policies and mandates and marching into the school. Perhaps you are not listening or you are a compromised man who is unwilling to stand up and do the right thing.

Leave the kids alone. Stop following unlawful mandates when the parents have clearly spoken and there is zero science nor law to back up this tyranny on these kids.

Well done, parents and students! May this be an example that will set brushfires of freedom in the minds of your fellow citizens in Michigan and across the US.

In case you have missed some of these videos of the resistance, be encouraged that people across the earth are standing up against the tyranny. The Mockingbird, corporate-owned media just aren’t reporting it because they are owned by those pushing the plandemic narrative.

Here’s the people of London clashing with agents of the state outside the The Medicines and Healthcare products Regulatory Agency against children being given the deadly COVID shots.

Australia truckers settle in for threatened blockade and the Mockingbird, corporate-owned media is afraid to even report it.

Vancouver, BC Canada Turns Out to Protest COVID Tyranny

We’ve even got some who set fire to the door of the Kopp mansion, the temple of Freemasonry in Colombia.