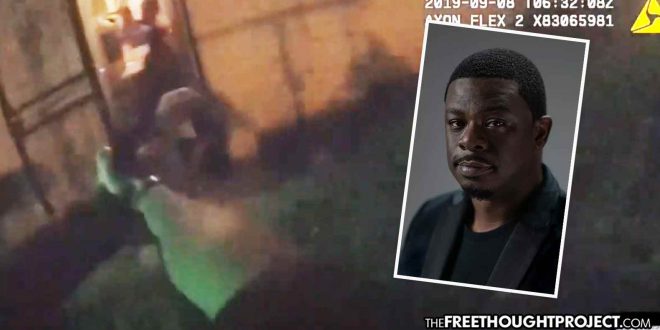 Milwaukee, WI — Imagine sitting in your home, doing nothing wrong, and hanging out with your family when you hear a commotion at the back door. As you run to see what it is, a police officer shoots you in the stomach. Then imagine that for two years, you fight to hold that police officer accountable but that accountability never comes. Unfortunately for Tari Davis and his family, there is no need to imagine.

On a website created by Davis, this innocent father lays out in grave detail how it feels to experience such a horrifying event.

First imagine, You are sitting with your kids on a Saturday night watching a movie, and only moments later you’re lying in a hallway with a bullet in your stomach.

Now imagine it was a police officer who shot you in your own home without any justification. Imagine you are laying there helplessly bleeding.

Imagine the police step over your body as you start to go cold, they search your home, they separate your family and detain your children. The only thing you can hear is your children screaming and crying. You’re taken to a hospital for emergency surgery. You wake up chained to a hospital bed with officers looking down at you.

Imagine the police John Doe you, take your phone out of your room, and refuse to tell your family where you are located, whether you are alive or dead, or anything about your status. They then escort your family off the hospital grounds.

Imagine being an innocent victim and you and your family are treated this way.

Davis was shot on Sept. 8, 2019 by Milwaukee police officer Nikolas Zens and it would take him over a year just to get that name from the police department. Naturally, since the department refused to even name the officer who shot Davis, they had no problem keeping the body camera footage secret as well. However, after fighting for nearly two years, Davis finally obtained it and published it to his website this week.

Despite getting the body camera footage, Davis says authorities are still dragging their feet over two years later.

“There’s a lot more I’m waiting on that they’re still not being transparent about,” said Davis.

On that fateful night, Zens was pursuing an unarmed suspect who ran into Davis’ backyard and was trying to get into his family’s home. As Davis makes his way to the chaos, the suspect, Kevin Brown is breaching the home and Zens was right behind him.

“I come downstairs to close the back door, and as I’m coming toward the door, the door pushes toward me,” Davis told FOX 6 Milwaukee. “I look up, and I see fire.”

Zens incorrectly thought that Brown was armed and he immediately resorted to deadly force. The only problem — outside the fact that he was attempting to kill an unarmed man — was that his deadly force was aimed at the wrong man.

As Zens fired his weapon, he shot Davis instead of Brown. The bullet penetrated the innocent father’s stomach, ricocheted off his hip and went out of his back. Zens then immediately went into defense mode and attempted to justify his shooting.

Brown was then taken into custody without incident. As for Davis and his family, however, their nightmare was only just beginning. Instead of realizing their mistake, or, to cover it up, the entire family was detained and treated like criminals.

“You’re bleeding out, police step over your body, search your home, separate your family, and detain your children.” -Tari Davis

Davis describes how it felt after he was shot:

You are eventually sent home, with everything in turmoil. You learn that the police detained and interrogated your 14yr old daughter alone for hours. They searched your home without consent. They towed your car out of your driveway with no explanation.

Imagine waiting on answers from the city, going through rehab, and the medical bills are multiplying. MPD claims they’ll release their findings within 45 days, yet you receive nothing for over a year.

After finally figuring out that Davis was an innocent man, it would take over a year before the department took any action against Zens. Though he was eventually fired for “failing to meet deadly force requirement of target isolation,” Zens was never charged with a crime and maintains his law enforcement certification.

When asked for a reason as to why he was not charged, the District Attorney’s officer said that Zens “did not act unreasonably under the circumstances.”

“When you’re totally an innocent bystander and you and your family get treated this way, it kind of hits different,” Davis said. We agree.