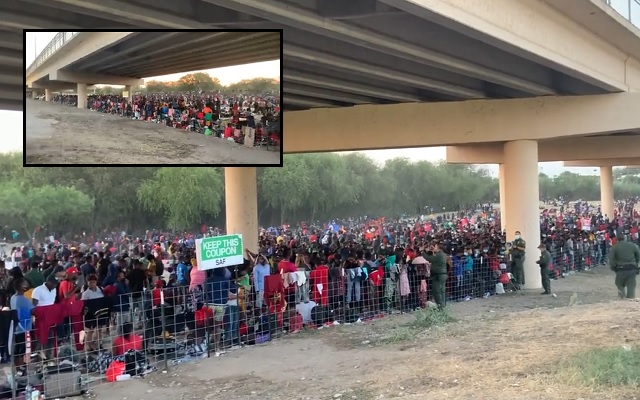 The Biden regime is on a mad dash to destroy America by any means possible.

Thousands are crossing this one section of the border ever few hours.

These Haitians are flying to Mexico in order to illegally cross into America and claim “refugee” status! Gypsies from Romania have been doing the same!

Earlier reports indicated over 2 million illegal aliens are expected to cross the border this year alone.

Meanwhile, Democrats are plotting to ram through an amnesty for 8 million illegals with just 50 votes in the Senate through budget reconciliation (as the ADL demanded they do earlier this year).

From Big League Politics, “Democrats Planning to Ram Through Amnesty for Eight Million Illegal Immigrants With 50 Votes Through Budget”:

As establishment media frames congressional debate regarding Biden’s multi-billion spending bill around the price tag, Democrats are stealthily moving to provide citizenship to eight million illegal immigrants in the act through the use of budget reconciliation.

The planned amnesty provision for Biden’s ‘Build Back Better’ social program spending package would grant any illegal immigrant termed an ‘essential worker’ present in the country before 2020 eventual citizenship, on the condition of checking off the appropriate paperwork and refraining from further criminal activity. Estimates of the demographic the amnesty would entail are as many as eight million.

House Democrats are currently awaiting a ruling from the Senate Parliamentarian on the legality of including mass amnesty for illegal immigrations in the law, which Democrats intend to pass as an annual budget. Using a legislative rule known as budget reconciliation, the Senate can pass a budget with 50 votes as opposed to the usual 60, allowing Democrats to ram through amnesty without the traditional legislative safeguards intended to avert such an action.

The Senate Parliamentarian has shot down policies Democrats have sought to ram through Congress with the use of reconciliation before, most notably spiking a minimum wage increase from being included in budget legislation earlier this year. If she approves amnesty, vulnerable Democrats who represent states flooded with a tidal wave of illegal immigration during Biden’s tenure on the presidential throne may be placed under intense pressure. Joe Manchin has already suggested he’s not willing to vote for Biden’s spending package as a result of fiscal concerns.

While Americans are being told they need to be vaxxed to have a job or go to school and need to show their vax passport to go to a restaurant illegal aliens are being encouraged to illegally invade our southern border and being told they don’t have to take the jabs!