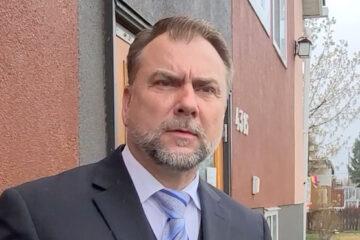 Alberta Pastor Artur Pawlowski was on Tuesday and was unbowed and unbroken as he railed against the criminal elements in government with a personal vendetta against him and their hatred for Christ and His Church.  In doing so, Pastor Artur called out the crimes and hypocrisies of those engaged in attacks on him, his family and the Church.  At the hearing, which would determine the difference between time served or whether he would go back to jail, he laid the axe to the root of the problem and began pointing out the crimes taking place in Alberta by those who swore to uphold the law and he unmasked the scam of the COVID plandemic.

Here’s his statement to the court in full, and it’s powerful!

I am here, before this court as a political prisoner of conscience!

The AHS and the politicians have found a new way of penalizing anyone that is opposing their unconstitutional medical Tyranny!

They hate the idea, that they have been exposed for what they really are. Liars, hypocrites and cheaters!

I have seen this growing back behind the Iron Curtain under the boots of the Soviets! I have heard from my grandparents about the similar tactics during the time of the Nazis! Persecuting Churches and the clergy! And that what we are talking here about. Canada has fallen very low!

Nelson Mandela said that when a man is denied the right to live the life he believes in, he has no choice but to become an outlaw.

The politicians and the AHS have been embarrassed by the level of hypocrisy and double standards that we have shown to the whole world and now they are using this court and this judge as their personalized weapon against us the whistleblowers that are simply exposing their corruption.

We do not have flu crisis; we have opioid crisis in Canada! Alcoholism crisis! Record high among the youth suicide crisis! Homelessness crisis! Hopelessness crisis! As a Pastor I do not just deal with the physical problems but also emotional, spiritual and mental as well! People in our community are dealing with loneliness, stress, grief, loss, and isolation and they desperately need their Pastors!

We are and always have been the front-line workers in the time of crisis! Now we are needed more then ever!

People need more Church not less! More prayers not less! We, the clergy are essential! Now, the Church is more essential than the corrupted politicians are!

How can the politicians say that they care about the health and safety of people if they are imposing rules and are not even bothering to follow them? If they claim these rules are about safety but they violate their own mandates, then it must NOT be about safety – so then what exactly ARE these mandates are about?

The politicians who mandated these orders, like masks, social distancing, lock downs have been caught breaking their own restrictions and should also be found in contempt and held accountable. And because they are not being held to the same standards, it shows to me that this is not about justice and the Rule of Law but about simple Vengeance.

I am here in this court as a victim of a personal vendetta from a very corrupted and evil, lying and deceiving politicians! If I am guilty of a crime, then so it is the Premier of Alberta Jason Kenney with a bottle of Jameson Irish whiskey on the patio of the Sky Palace. Breaking their own rules and mandates with Parks Minister and House Leader Jason Nixon. And with the biggest hypocrite of them all, the boss of the AHS that is persecuting us here today, the Health Minister Tyler Shandro not caring about his own rules having good time with the Finance Minister Travis Toews (Tiws)! They also have broken the Rooks order! The Associate Chief Justice John Rooke order caught them as well! If I am guilty so, are they!

If this court has found us guilty and wants to send us to prison and is refusing at the same time to prosecute those that have subjected us to those mandates and broke them without blinking an eye then this court is willing to have two sets of laws, one for the corrupted politicians and one for the rest of us! Then this court is also not about justice and the Rule of Law!

I hope that this court is about justice and the Rule of Law not like those hypocritical politicians with their personal vendetta! If that is the case, then there is in fact selective and unjust application of the law and now two sets of laws, one for the corrupted politicians and one for the rest of us, citizens. If that is what would happen, then this would be the biggest mockery of the justice system in the modern history of democracy!

What is the government doing for the people that are looking for spiritual guidance? For those millions hurting, hopeless all around us? Do their lives matter? What safety measures are they taking for those people? What are they doing to stop the deaths from drugs and suicides?

Abraham Lincoln said those powerful words: Those who deny freedom to others deserve it not for themselves. If you sentence me you will be sentencing yourselves and those hypocrites in Edmonton in the Legislator!

Sure, you can lock us up and throw the key away, but our political imprisonment will shout even louder from prison about this hypocrisy and the mockery of justice! This will be loud and clear that this nation, Canada is no better then China, North Korea and Russia! The world will see that here in Canada there are two sets of rules! One for the corrupted politicians and another for the citizens!

If you send us to prison, you must send those Alberta politicians to prison also! We can even share a cell if that what you wish! However, if you will not do that then the whole world will know that there is no justice in Canada anymore!

John F. Kennedy said those powerful words: The rights of every man are diminished when the rights of one man are threatened.

The corrupted bureaucrats want my apology! They want me to say that I am sorry for doing my job! For saving lives! For feeding thousands of most vulnerable in our society! For giving hope to the people! Well, here is my answer: Exactly 500 years ago another man faced a very similar trial, and I was told to apologize, if he will recount he will be off the hook. His name was Martin Luther! Let me echo today his words as my response to those that seek to hurt me, to hurt the poor, our Church community and to hurt my family!

I opened the Church for the hurting people looking for help! For that I will not apologize!

I cannot and will not Recant anything, for to go against conscience is neither right nor safe. Here I stand, I can do no other, so help me God. Amen.

TRENDING:  Trump Speaks Out In Attempt To Save 10-Month-Old Charlie Gard From Death Sentence By European Court

Amen, and amen!  Would to God that more pastors in the US and abroad had his fire and passion that can only come from the Spirit of God!