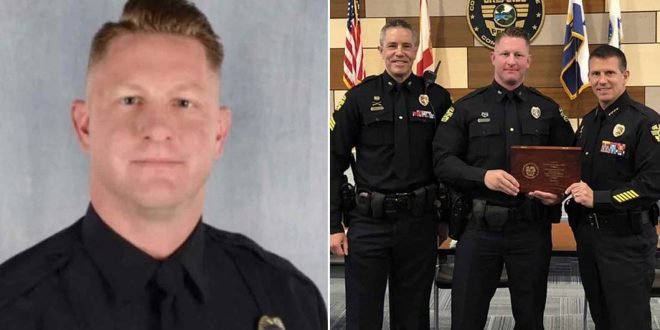 Orlando, FL — Orlando Police Department’s Jonathan Mills was named the Officer of the Year in 2018. This award was given to him despite his extremely tainted history. Before this award, he was verbally warned for an accusation of racism in 2016, and was hit with an excessive force lawsuit in 2017—and they still named him officer of the year! Now, in a move that is likely making the union rethink their award, Mills has been arrested and charged with sexual battery for sodomizing a man while looking for drugs during a traffic stop.

Mills, even though he won the Officer of the Year award in 2018, is no stranger to controversy and was the subject of excessive force lawsuits and at least one lawsuit against the city by a motorist who claimed Mills treated her with racism during a traffic stop.

But that is not all. In one case, which led to the charges this week, a man alleged Mills reached down the back of his pants and sexually assaulted him while looking for drugs during a 2014 traffic stop. The man settled for $130,000, documents show.

In that incident, as the Orlando Sentinel reports, officers were looking for a Black man driving a rusty grey Toyota Corolla on Aug. 12, 2014, when Sgt. Paul Griffith stopped a driver and a passenger in a silver Nissan Sentra, according to an investigative report by the state attorney’s office.

Police quickly determined that the men in the Corolla were not the suspects they were looking for but Mills — being the sadistic drug warrior that he is — decided to search the passenger anyway.

After ordering the man from the car, Mills searched his pockets before moving on to his genitals.

“He tries to — he tries to open it, but at that point I’m — I’m tense,” the man said in a deposition. “I’m frozen. … He puts his whole body against mine, on top of the car, and says in my ear, really close, what are you hiding in your [anus]?”

After handcuffing the man and walking him back to his car, Mills proceeded to anally rape the innocent man in a search for drugs that did not exist.

“I kept telling him no… and he kept doing it,” the man said during his deposition. In a complaint he filed to OPD, the man said, “I never felt so violated in my life.”

Neither the driver nor the passenger had committed a crime. Mills would go on to win officer of the year four years later and wasn’t held accountable until this year — 7 years after he jammed a finger in an innocent man’s anus to look for contraband.

As TFTP reported, this was not this tyrants first sadistic rodeo either. Mills was ‘disciplined’ last year after he was involved in an incident with three teenagers outside an Orlando liquor store in which he tried to provoke them into violence. The three teenagers, aged 17, 19, and 19, had already been approached by another officer in Parramor and told to take a hike. But instead of leaving, the kids hung around, prompting Mills to come and initiate a second police contact.

Once Mills arrived on scene he began to speak to the teenagers in a way which was not acceptable according to the “high standards” of the OPD. Following an internal investigation of the incident which took place in May, the OPD concluded Mills attempted to “taunt, belittle, humiliate and even incite … violence” against the teenagers.

The three teenagers were arrested for disorderly contact but one of the parents was successful in filing a complaint against Mills. The complaint led to an internal investigation which reviewed the body camera footage of the incident in question. Mills can be seen and heard grabbing the hands of one of the teenagers and remarking:

[t]hese soft hands have been through something. You have no marks on your knuckles, you’ve never been in a fight.

The Officer of the Year also appeared to taunt one teenager into running from the police, presumably as a threat that if he did he would be able to escalate his use of force against the teenager. He told the kids:

I hope he runs.

When Mills saw one teenager talking quietly on the cell phone he took the kid’s phone and tossed it to the ground. Mike Stanley of OPD’s internal affairs wrote in his findings Mills’ actions were not reflective of the police department’s code of conduct. He stated:

[Mills’ actions were] not representative of the high standards of the professional conduct expected from members of the Orlando Police Department.

All charges were dropped against two of the teenagers arrested in the incident and no further information is available at this time as to why the charges remain against the final teenager involved who is apparently a minor.

After this embarrassment, Mills was fired in February of this year and OPD decided to amend its Officer of the Year qualifications saying a future candidate must not have any below standard ratings in his/her reviews. According to the Orlando Sentinel, Mills was given the Officer of the Year award for “making more than 100 arrests and confiscating numerous guns and drugs in 2018.”

It is almost certain many of those arrests were made under false pretense and gross violations of rights.