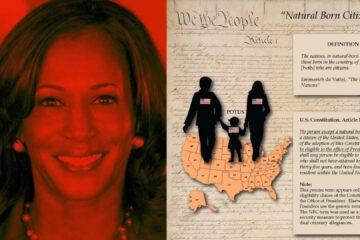 “Thou shalt in any wise set him king over thee, whom the LORD thy God shall choose: one from among thy brethren shalt thou set king over thee: thou mayest not set a stranger over thee, which is not thy brother.” – Deuteronomy 17:15

Article II, Section 1, Clause 5 of the US Constitution reads:

The natural born citizen discussion must again take place. After calling out the usurper Barack Hussein Obama Soetoro Sobarkah, Ted Cruz, Marco Rubio and others, it’s time to address it against concerning anchor baby Kamala Harris. We’ll look to history, the Constitution and the Bible to see why it is important that the person who takes the position of president of the united States is a natural born citizen. We’ll also look at the differences between a naturalized citizen and a NBC. * The sound didn’t work for about the first minute and a half so, please feel free to skip over that portion of the show to the 7:33 mark.

take our poll - story continues below
Completing this poll grants you access to DC Clothesline updates free of charge. You may opt out at anytime. You also agree to this site's Privacy Policy and Terms of Use.
Sons of Liberty · It’s Time To Address Natural Born Citizen Status… Again – This Time For Kamala Harris

Articles, videos and links mentioned in this episode.

THE SONS OF LIBERTY DOG TAGS – This Week Through Saturday, September 25, 2021 At Midnight Save 10% By Using The Promo Code LOVE At Checkout In Our Store

Fact Check: Kamala Harris Is A Natural-Born U.S. Citizen And Eligible To Serve As President

Are Joe Biden’s Extreme Coughing Fits A Reason For Concern?

What Our Framers Knew: The Constitution, Vattel, And “Natural Born Citizen”

Article I, §8, cl. 4 delegates to Congress the power “To establish an uniform Rule of Naturalization”.6 Pursuant to that power, the First Congress passed the Naturalization Act of 1790. Here is the text, which you can find at 1 Stat. at Large, 103:

As has been very eloquently presented by Publius Huldah, the founders had at least three copies of Vattel’s Law of Nations in their possession during the first Constitutional Convention and they made use of it. In that book, it is the first place that we read about a natural born citizen. Vattel writes concerning citizens and natives:

PH also offers the following documentation from David Ramsay to demonstrate what he wrote.

A Dissertation on Manner of Acquiring Character &amp; Privileges of Citizen of U.S.-by David Ramsay-1789

“No Person shall be a Representative who shall not have attained to the Age of twenty five Years, and been seven Years a Citizen of the United States, and who shall not, when elected, be an Inhabitant of that State in which he shall be chosen.”

“No Person shall be a Senator who shall not have attained to the Age of thirty Years, and been nine Years a Citizen of the United States, and who shall not, when elected, be an Inhabitant of that State for which he shall be chosen.”