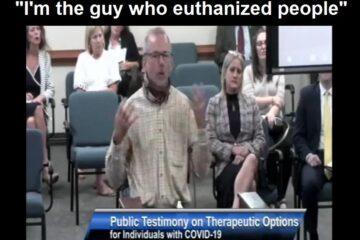 A pulmonary nurse of 31 years testified before the South Carolina State Legislature on “therapeutic options” for the alleged COVID-19. During his testimony, he explained that he began to realize the protocols he was following were killing his patients not helping them.

Albert Spence gave moving testimony recently concerning his assistance in the killing of patients that had been labeled as having COVID by just “doing what I was told.”

Sound familiar? It should and Spence made reference to Auschwitz in his testimony.

Spence said that in all his years of nursing, what he was told to do went against most of how he had been trained, but it was the medical system that wanted him to treat them that way. However, once he began to see his patients dying, and that the CDC fraudulently changed the PCR tests dramatically, just like we reported that they would do to cover for the shots, it frightened him and he had to speak out.

TRENDING:  US Federal Court: Private Lawsuit Can Bring 16 of the World’s Largest Criminal Banks to Their Knees

According to Spence’s testimony:

I lost sleep over it. I was having chest pain over it. It woke me up in the middle of the night – hit me hard. I could not sleep.

Because my first week or two there (COVID ward), I didn’t lead them to the gate, but I’m the guy that euthanized people.

They call it “comfort care.” But when you get to the point where you can’t take (oxygen mask) off, you get so upset. You haven’t seen your family except through maybe an iPad, in weeks.

And you’re never going to come off the high flow, and the doctor says: “You’ve done your best. But this is going to be it for you.”

And so the patients get all teary eyed and upset, and they call in the palliative team, and they all hold their hands and cry.

But they said: “We can keep you comfortable.”

Here comes Albert (referring to himself). He’s got the morphine and ativan, and I load them up and take off the high flow, and they gas themselves to death.

And I’m the guy who was pushing the buttons, like in the gas chambers at Auschwitz.

I’m glad he does realize now and repented. Many more doctors and nurses need to do the same and we need to eliminate the CDC, the FDA and corrupt criminal politicians, along with Big Pharma and begin proceedings in a new Nuremberg trial and not stop with convicting a mere handful, but the entire lot of them.

TRENDING:  30 Of The Biggest Lies & Hoaxes Perpetrated On The American People