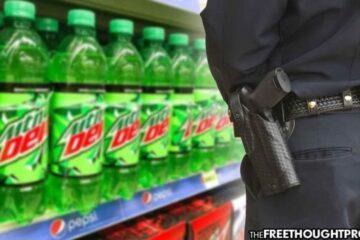 Perry County, PA — When Joseph Sobolewski got thirsty last month, he saw a sign in a nearby convenience store that was advertising two 20-ounce Mountain Dew bottles for $3. Sobolewksi only wanted one bottle, so he grabbed it, threw down two $1 bills — thinking he’d left a tip — and walked out of the store. Now he’s facing 7 years in prison over it.

Because Sobolewski didn’t realize that the sale price only applied to the two-bottle deal, instead of leaving a tip like he thought, he was actually short. A single bottle costs $2.29 and with tax applied, he was actually $0.43 short.

Instead of simply realizing the error and chalking it up to a harmless mistake, the store called the police — over 43 cents. According to police, the store clerk followed Sobolewski out of the store and told him that $2.00 was not enough, but when he did the math for a $1.50 soda, it was more than enough, so he drove off.

How it escalated to the next level of police involvement is unclear as the clerk told police that Sobelewski “threw $2 onto the checkout counter.” And, by his math, he actually tipped the clerk.

When police caught up to Sobolewski, instead of simply asking him for two quarters to pay his tab, they arrested him on felony theft charges and locked him in a cage because the store clerk wanted him to be punished. According to Pennsylvania State police spokeswoman Megan Ammerman, troopers “cannot decide to not charge someone for a criminal case, only victims of certain crimes can decline charges. If we are called to an incident involving a crime we follow and enforce the PA Crimes Code.”

After he was arrested and thrown in a cage, to top it off, they set his bail at a $50,000 cash-only bond, meaning he will sit in that cage until his trial in November as he is unable to pay for it.

The Eighth Amendment of the U.S. Constitution reads as follows: Excessive bail shall not be required, nor excessive fines imposed, nor cruel and unusual punishments inflicted. Here at the Free Thought Project we feel that $50,000 bail for a $0.43 underpayment on a soda is exceedingly excessive and so is the 7 year sentence Sobolewski is now facing. Sadly, however, it is not unusual.

Sobolewski’s sentence highlights a serious problem with the government’s “three strikes” law. What should have been a case of a man apologizing and paying the $0.43, has morphed into a massive incident that will cost taxpayers hundreds of thousands of dollars and keep an otherwise entirely innocent man in jail.

According to Pennlive, Sobolewski’s first theft conviction occurred more than 10 years ago and involved a tank of gasoline. He drove off without paying. In December 2011, he was arrested for stealing a pair of shoes from a K-Mart in Cumberland County that cost $39.99.

For stealing the sneakers and gas — a decade ago — Sobolewski was sentenced to three months in prison and paid the government nearly $1,000 in fines.

Under Pennsylvania law, a first charge of retail theft where the value of the items stolen is less than $150 is graded as a summary offense, the same as a speeding ticket, according to Pennlive. The second offense, no matter the amount, is then a misdemeanor and the third offense becomes a felony.

TRENDING:  Pastor Dana Coverstone Was Just Given Glimpses Of What America Will Look Like In The Post-Election Period

“For me, I would get the deterrent factor if someone’s thefts were getting worse or higher in value,” Brandon Flood, director of the state’s Board of Parole, told Pennlive. “But the lack of discretion is what bothers me. It’s problematic because it doesn’t factor in the amount.”

Sobolweski, who thought he was tipping the store clerk could now spend the next 7 years in a cage thanks to this arbitrary law — the same amount of time if he killed someone and was charged with manslaughter.  And we call this “justice” in the land of the free.