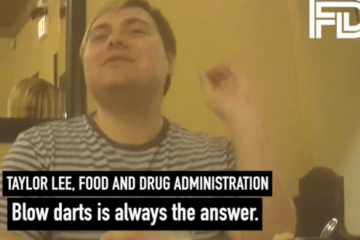 How people like this have not been targeted by the People is beyond my comprehension. I know why they aren’t targeted by the organized DC crime syndicate. It’s because they are useful idiots in the crimes committed and they believe they are above the law… but there’s a day of reckoning coming and they will not escape. With that said, Project Veritas released their second undercover video in a series with an effeminate man describing how minorities should be “vaccinated” against their will.

What’s even more amazing is this effeminate man looks like he is far from looking after his own health by being obese. Yet, here he is, on camera, espousing racist, criminal thoughts against people he doesn’t even know.

Conservatives are up in arms after a Food and Drug Administration (FDA) employee was caught on camera advocating forced vaccination for minorities and a Nazi-style register of the unvaccinated, “like the Jewish star.”

FDA economist Taylor Lee told an undercover reporter with Project Veritas that the federal government could learn a thing or two from the Nazis when it comes to getting the population vaccinated, according to a video published by the conservative group – famous for its hidden camera sting operations – on Wednesday.

Lee suggested that “census goes door-to-door” looking for vaccine holdouts, and when someone without the shot is found, they “blow [the Covid-19 vaccine] into them. Blow dart it into them.”

“I think, at that point, I think there needs to be a registry of people who aren’t vaccinated,” he continued. “Although that’s sounding very [much like Nazi] Germany. Nazi Germany… I mean, think about it like the Jewish star.”

Lee’s fantasies of forcible vaccination got darker, as he told the Veritas reporter: “I’m gonna go door-to-door and stab everyone [with the vaccine], ‘Oh, it’s just your booster shot! There you go!’”

Regarding minorities (African-Americans are more likely than whites to be unvaccinated), Lee had the same solution: “Blow darts is always the answer.”

While blacks can point to a history of medical experiments being performed on them against their will, Lee said that he “can’t blame them” for their hesitancy to get vaccinated, “but at the same time, like, blow dart. That’s where we’re going.”

Project Veritas’ videos have been criticized by liberals for their allegedly deceptive editing, and the subjects are often filmed on dates with undercover reporters, where alcohol and bravado make them more likely to run their mouths and exaggerate. Nevertheless, conservatives were incensed, with one commenter stating that although Lee is not a senior official at the FDA, “I have a feeling the blow dart dude’s disdain for ordinary Americans is shared by many in the @FDA.”

You can bet your bottom dollar if someone in real America had an employee on the bottom of the rung that talked like this, they would be fired, and no doubt, the business would take a hit for having an employee that said such things. But hey, it’s the unconstitutional FDA, what do we expect?

Well, yours truly expects there be justice by first dismantling and eliminated the FDA and all other unconstitutional federal agencies, and then prosecuting those in those agencies who have committed crimes against the People.

Some people took to Twitter to call out this little criminal for what he said, and no, it is not free speech to speak about committing a crime against someone. It’s criminal.

Indeed, it should be national news, but remember, the Mockingbird, corporate-owned media are the ones keeping their pieholes shut on this entire thing. And why, you ask? Because their sponsors are Big Pharma. That’s why!

We need a serious round of justice upon these criminals and I’m speaking of justice in the biblical sense.

Check Out The Previous Video Release By Project Veritas In This Series.