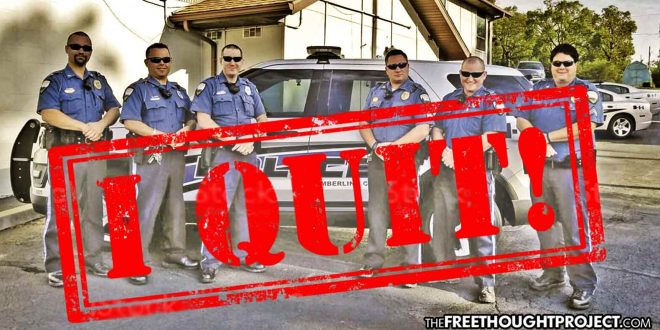 Kimberling City, MO — Earlier this month, without warning, the taxpayers of Kimberling City found out that the police department they have been paying for “protection,” no longer wished to serve them. The entire department, including the police chief and every single officer on the force, turned in their resignation letters and abandoned their positions.

The move caught the entire town, including the mayor and the sheriff off guard as there was no warning given or demands made prior to the mass exodus.

“Have I ever said no to you guys? No, I haven’t. So how can I explain this right here? I have no idea,” said Mayor Bob Fritz, who told Ozarks First that he was shocked and disappointed when he received police chief Craig Alexander’s resignation letter.

Since the 23 of August, the town has been without a police chief and days later, the rest of the department followed suit. The mayor says he is working on filling the positions.

“A mutual aid agreement with Stone County Sheriffs Office and the City of Branson West in that they’ll assist Kimberling City until our police department is at full capacity. As of today, we have eight resumes and some of them are unbelievable. And like I told the city administrator, start setting up interviews and everything too. I think we can have this taken care of this, I’m hoping in the next few weeks or so.”

“It will be a struggle to fill the police department back up with qualified officers, but hopefully they can start working on that soon and get that accomplished,” Stone County Sheriff Doug Rader said of the resignations.  “Until then we will be answering all the calls in Kimberling City, we can’t enforce city ordinances, but any other calls we will be handling at this time.”

After they resigned, the officers and the chief cited a low pay rate and not having the proper tools to do the job.

As we reported in July, according to a recent report from Police Executive Research Forum (PERF), police departments from coast to coast are having an extremely difficult time keeping officers on the force. The staggering numbers have many alarmed, but is it really cause for concern?

Perf reports that the rate of retirements at some departments rose 45% compared with the previous year. According to the group’s research, at the same time, hiring slowed by 5%. Using the rise in violent crime across the country and these startling rates as the impetus behind a new spending plan, president Joe Biden recently approved the use of $350 billion in Covid-19 relief funding to hire more law-enforcement personnel.

Though calls for police accountability have been becoming louder over the last few years, the movement sparked by the murder of George Floyd set off a powder keg which has led to historical reform from coast to coast. As a result of the push to be held accountable for their actions, cops are upset and are leaving the force in record numbers.

Naturally, police are playing the victim here and claiming the calls to hold them accountable amount to a war on cops and this is driving them out.

While the town struggles to fill positions of their police force, it is important to point out that people aren’t going around breaking the law without cops to stop them — thus highlighting the revenue collection mission of police.

Drug offenses, parking violations, and traffic citations are not so much crimes, as they are streams of revenue for the city. They are also the reason for the majority of police harassment within particular communities; harassment that is being proven entirely unnecessary as the town continues to function just fine without cops.

What’s more, the idea that police protect you is a misconception, as they will seldom prevent violence. They normally show up after the violence or crime has been committed and then try and find a culprit, or not.

The average response time to a 9-1-1 call is 10 minutes nationwide; for poor areas, that time quadruples. In some cases, the dispatchers do not even take the caller seriously and the victim ends up dead when a crime could have actually been prevented.

The reality is that police act as revenue collectors for the state and solely exist to enforce the law only.

In a perfect world, police would show up prior to a crime and stop it, or at least during a crime, but this is simply not a reality.

Police in America also do not “protect and serve.” If you doubt this claim simply refer to Warren v. District of Columbia, in which the Supreme Court ruled that the police do not have a constitutional duty to protect a person from harm.

Imagine a police force that acted more like firefighters or EMTs. Firefighters don’t have to go door to door looking for fires, in order to be effective. EMTs, just like firefighters wait for a call before reacting and their services are oft proven invaluable contrary to that of police work. Perhaps this recent mass resignation can be used to channel this notion to the forefront and completely revamp the idea of policing in the land of the free. Perhaps.