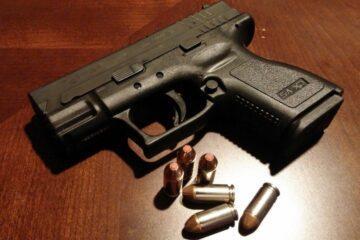 The House passed a bill containing all sorts of egregious, unconstitutional items in it. The 2022 National Defense Authorization Act contains language that would allow military courts to confiscate guns from veterans of the military. Remember President Donald Trump’s red flag laws? Well here they are illegally aimed at our veterans, and 135 of the Republicans, what many consider to be the “good guys,” voted for it.

A provision in the 2022 National Defense Authorization Act would allow military courts to issue protective orders that include “Red Flag” gun confiscation, according to the more than 1,300-page bill.

In the legislation, those beholden to the United States Code of Military Justice could be issued a “military court protective order” by a military judge or magistrate, which would make “possessing, receiving, or otherwise accessing a firearm” illegal.

Additionally, military court protective orders issued on an emergency basis are exempted from providing the recipient with the standard “right to due process.” Instead, “notice and opportunity to be heard” must only be provided after an order was already issued.

However, here are the 135 Republicans who actually voted for it.

Gun Owners of America commented on this bill and its provisions:

If Nancy Pelosi gets this into the military code, then it becomes the “precedent” for enforcing gun confiscation against the rest of the population.

So please contact your Representative and Senators in only a few clicks with GOA’s TAKE ACTION tool to oppose this gun control!

Seizing firearms first and “getting the Due Process later” will never constitute sufficient Due Process, no matter how much anti-gunners may pretend it does.

That’s why Gun Owners of America strongly opposes H.R. 4350’s gun control, and we need our two million members and activists to help deliver this message on Capitol Hill, as well.

Personally, if we want to secure our liberties at this time in history, we need to seriously start to talk about secession or, at the least, dissolving DC.